This image is obtained from this paper. 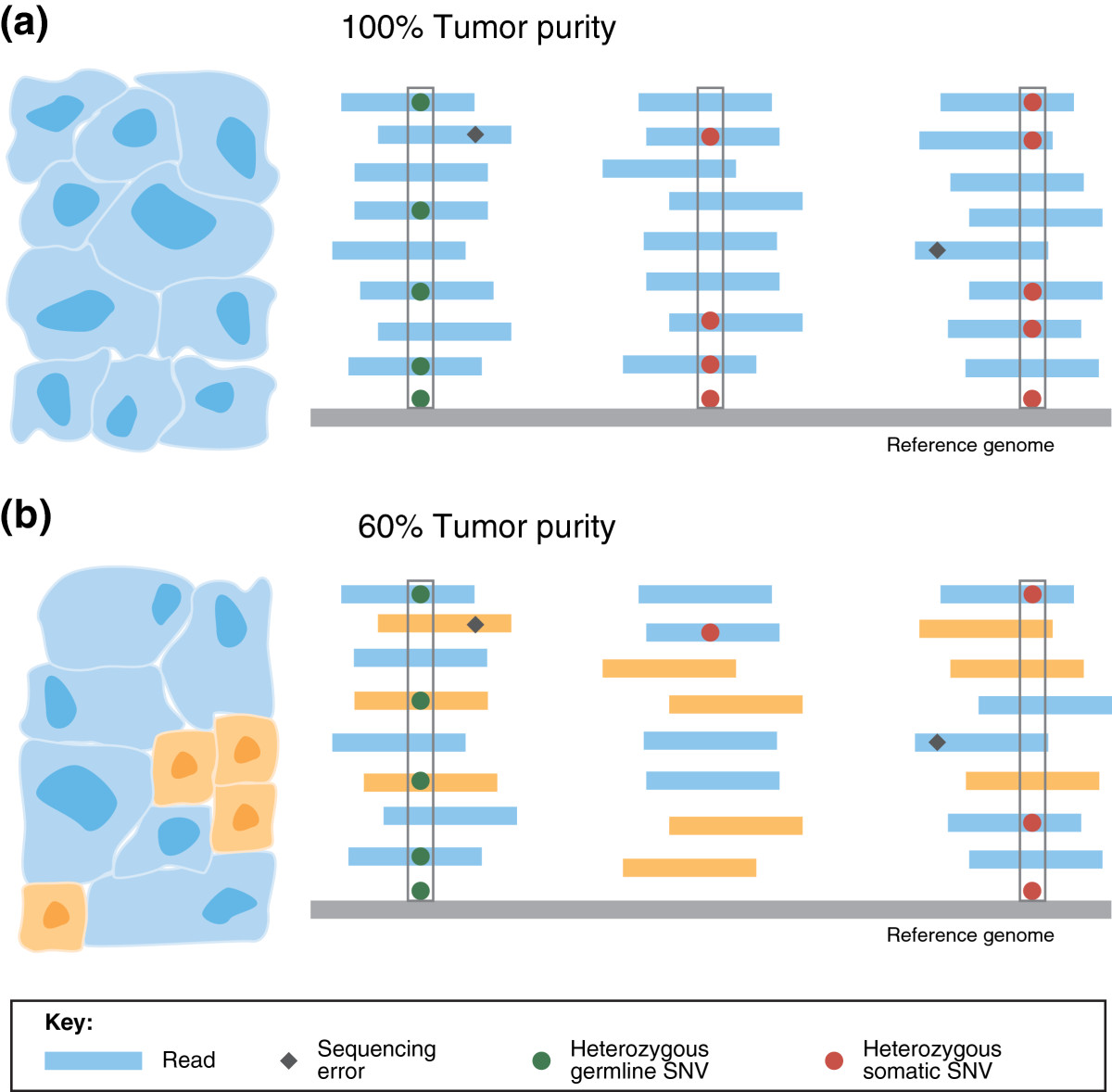 The description of this image is as follows:-
DNA-sequence reads from a tumor sample are aligned to a reference genome (shown in gray). Single-nucleotide differences between reads and the reference genome indicate germline single-nucleotide variants (SNVs; green circles), somatic SNVs (red circles), or sequencing errors (black diamonds). (a) In a pure tumor sample, a location containing mismatches or single nucleotide substitutions in approximately half of the reads covering the location indicates a heterozygous germline SNV or a heterozygous somatic SNV - assuming that there is no copy number aberration at the locus. Algorithms for detecting SNVs distinguish true SNVs from sequencing errors by requiring multiple reads with the same single-letter substitution to be aligned at the position (gray boxes). (b) As tumor purity decreases, the fraction of reads containing somatic mutations decreases: cancerous and normal cells, and the reads originating from each, are shown in blue and orange, respectively. The number of reads reporting a somatic mutation decrease s with tumor purity, diminishing the s ignal to distinguish true somatic mutations from sequencing errors. In this example, only one heterozy gous somatic SNV and one hetererozygous germline SNV are detected (gray boxes) as the mutation in the middle set of aligned r eads is not distinguishable from sequencing errors.

This is my understanding below. Am I correct?

Your link doesn't link to the paper, and you seem to be ignoring half of what the image is trying to get across.

The point is that since tumors are heterogenous, you very well might have only 40% of the cells heterozygous for a particular SNV, which means it would only be observable in 20% of the reads. But if multiple reads with different start sites show the same SNV, it's likely to be real. If coverage is so low that you only get one read showing a real SNV, you won't be able to distinguish it from noise.

The existing answer is correct, but I want to expand on this a bit.

In the ideal world, a tissue sample will be completely homogenous (every cell has exactly the same genomic DNA with 0 differences), DNA sequencing machines will make 0 mistakes, and sequencing experiments will sample each portion of the genome (evenly) to a deep level of coverage. In this ideal world, distinguishing heterozygous SNVs from homozygous SNVs is trivial: for homozygous SNVs, 100% of the reads aligning to the position of interest will have the same nucleotide that differs from the reference; for heterozygous SNVs, there will be a perfect 50%/50% split between reads that match the reference and reads that match the alternate nucleotide.

The big problem is that none of these 3 ideals are true in the real world. Sequencing experiments DO NOT sample the genome evenly, so some regions have many reads mapping (we say these regions have "high coverage") while other regions have few reads mapping ("low coverage"). Also, DNA sequencing machines DO make mistakes, on the order of 1% for Illumina machine and 10-30% for long read sequencers like PacBio and Oxford Nanopore. Since sequencing errors are random, they're usually fairly easy to distinguish from real genetic variation, but only in regions of medium to high coverage. Finally, we cannot always assume that all of the cells in a sample will have identical DNA--this is ESPECIALLY true with tumor tissue.

For all of these reasons, we cannot distinguish heterozygous SNVs by simply requiring that exactly 50% of the reads mapping match an alternate nucleotide. As swbarnes2 states, it might be much lower than 50%, but with sufficient coverage you can make a confident decision.

Not the answer you're looking for? Browse other questions tagged genomics mutations sequence-alignment or ask your own question.