Why do electrocardiogram waves go P, Q, R, S, T and not like A, B, C, D? Is there any specific reason behind this?

Interesting question! I searched briefly and came up with an answer from this short paper.

I won't repeat all the details of the paper, but to be not a completely link-only answer I will give a brief summary:

The technology used at the time was a lot different than modern ECG leads: it used a Lippman capillary electrometer that used moving mercury to detect brief current changes.

With this relatively primitive device, there were 4 apparent features in the trace, which were named A B C D (earlier, a different physiologist saw only two ventricular features that he logically named V1 and V2).

However, it was known that this primitive measurement was not showing the actual electrical signal, but rather a filtered version due to the physics of the mercury in the tube, which was subject to inertia and friction. When a physiologist used mathematics to essentially "deconvolve" the filtered signal to get the original signal back, he plotted both curves next to each other: one labeled A B C D, the other labeled P Q R S T (note that in this deconvolved version of the trace, there were 5 components rather than 4).

As for the choice of P Q R S T, the source I reference notes that these were the letters commonly used by Descartes, and since then have been commonly used to refer to series of variables when one needs to distinguish between ABCD, XYZ, etc.

Later measurements that directly displayed the 5-component PQRST wave continued to use that terminology. 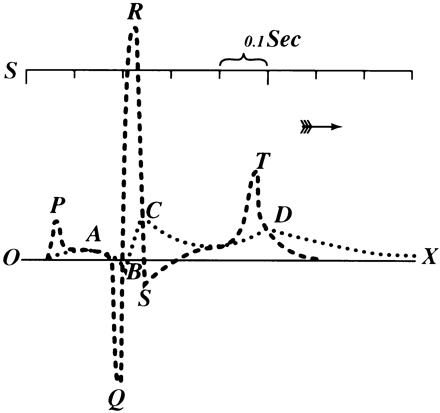 According to this site: http://www.ecglibrary.com/ecghist.html

Originally the waves were designated as A,B,C& D but after correction they were termed as P,QRS, T.

Why PQRST and not ABCDE? The four deflections prior to the correction formula were labelled ABCD and the 5 derived deflections were labelled PQRST. The choice of P is a mathematical convention dating from Descartes (as used also by Du Bois-Reymond in his galvanometer's 'disturbance curve' 50 years previously) by using letters from the second half of the alphabet. N has other meanings in mathematics and O is used for the origin of the Cartesian coordinates. In fact Einthoven used O ..... X to mark the timeline on his diagrams. P is simply the next letter. A lot of work had been undertaken to reveal the true electrical waveform of the ECG by eliminating the damping effect of the moving parts in the amplifiers and using correction formulae. If you look at the diagram in Einthoven's 1895 paper you will see how close it is to the string galvanometer recordings and the electrocardiograms we see today. The image of the PQRST diagram may have been striking enough to have been adopted by the researchers as a true representation of the underlying form. It would have then been logical to continue the same naming convention when the more advanced string galvanometer started creating electrocardiograms a few years later. (For more on Descartes see Henson JR. Descartes and the ECG lettering series. J Hist Med Allied Sci. April 1971;181–186)

8
How to analyse an ECG?
0
Is missing Q wave characteristic for Wolff-Parkinson-White Syndrome?
0
Electrocardiogram: Missed beats in presence of Ectopic beats or Premature Atrial/Ventricular Contraction beats
1
Electrocardiogram: Difference between Atrial Fibrillation and Atrial Flutter
5
What does the 'V' stand for in ECG electrode names?
3
What is the origin of the name "λ phage"?
0
ECG detection using minimal number of electrodes