About the formation of protein [closed]

There is a question in my textbook which asks: "What does the glucose produced from photosynthesis form?" However one of the answers said that glucose forms protein. But I'm quite sure that amino acids form protein, don't they? I would be grateful if anyone out there could help me out.

Photosynthesis results into formation of a carbon skeleton (a 3C or 6C skeleton). These newly formed carbon skeleton can be used to form a large number of bio-molecules which are required by a cell. For example the glucose can enter into aerobic respiration and the intermediates thus formed are used for synthesis of several molecules. 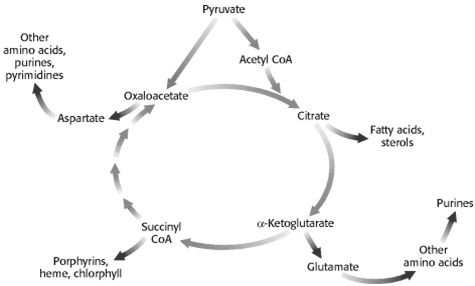 As you can specifically see from the above figure, alpha ketoglutarate is converted into glutamate which is then used for synthesis of proteins.

Alpha ketoglutarate is a keto acid can easily be aminated to give rise to amino acid.

2
What can cause the bloating in high protein diet of Whey proteins?
1
To what extent is it possible to understand if a bacteria can produce a protein? (in silico only!)
4
Are There Rules for How Proteins Are Formed?
8
Is consuming proteins different vs. consuming amino-acids and how?
2
Are peanut proteins similar to chicken meat proteins?
3
Molecular animations of, say, protein synthesis, are simplified, but how exactly?