When discussing safety of electricity, one usually considers a constant DC or AC current with constant amplitude over a longer time. It is easy to find tables in books or in the web which lists different magnitudes of current and it's physiological effect on the human body. For example this (chest pathway): 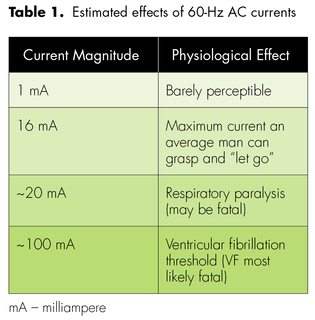 If you consider a short time discharge, for example from a capacitor or an inductor, this description no longer applies. For example if you charge a small parallel plate capacitor with several thousands of volts and touch it, nothing dangerous will happen (just a slightly painful sensation). Initially the current through the body will be very high (such that it would be deadly if it was constant), but which decays exponentially in a very short time.

So one needs another scheme to evaluate the dangers to the human body in the case of a short discharge. One simple criterion is the energy criterion where one calculates the energy which may maximally deposited in the human body by the discharge. This is for example used in for electrical safety guidelines for German schools (http://publikationen.dguv.de/dguv/pdf/10002/si-8040.pdf, page 27), where for > 60 volts a discharge energy below 350 mJ is considered as safe.

My question is if there exists also an overview of the effects on the human body for short discharges depending on the energy (for the case of > 60 volt), or even a two dimensional map (one axis voltage, the other one energy).

If so, do you have a reference to the original papers.

Browse other questions tagged physiology human-physiology or ask your own question.

3
What are the physiological effects of wine?
13
Why don't we feel hungry after waking up?
0
What is the minimum caloric intake for a truly starving adult
0
What is (are) the medium of conduction for an electrical current with an external source in the human body?
4
What physiological processes give rise to a linear cell survival curve?
1
How efficiently does the human body convert the energy stored in fat into kinetic energy?