Why do cells divide (or copy themselves)?

I learned about cells (not too much, but I've studied them a little bit. So don't feel offended when I say something which isn't really true. If something I write is wrong, please correct me (if it's not too much of effort).

Imagine the first cell on earth.

One of the solutions would be, that there's an intelligent creator, but I want to know the answer from the point of view from science.

Layman explanation would be appreciated

Just don't go too deep in the answer, I really just want to know if there is a solution to my questions. And if scientists really found out something, please just give me a very (VERY VERY) easy explanation.

Why do organisms replicate?

Given that there is (extrinsic and also eventually intrinsic) sources of mortality, organisms that did not replicate just ended up disappearing. Those that did replicate eventually ended up giving rise to important lineages.

In other words, replication occurs because those who did not replicate disappeared. It is also because unique instance of things may disappear that you regularly backup your computer (if you do).

By what mechanism did early replication occur?

You actually did not really ask about it but here are a few words anyway.

The mechanism by which first replication occurred are mainly unknown as it is hard to investigate specific processes that occurred such a long time ago. The field that studies the origin of life is called abiogenesis. You might especially want to read the section on Self-enclosement, reproduction, duplication and the RNA world. You might also want to read about Autocatalysis.

I am afraid that a summary of existing hypothesis on early reproductive systems are 1) out of my capacity and 2) would hardly fit into the wish to receive a very (VERY VERY) easy explanation.

There are two issues with your question that both lead to potential answers.

First, the assumption that there was ever "a first cell" is wrong. Life in general occurs in populations; if there's one of something then there usually are others. And the same is true in chemistry; usually if you have a certain molecule in a certain place there are probably others there too (that got there in the same way the first one did), and they're all having similar reactions (because similar molecules behave in similar ways). As abiogenesis, the general term for the development of life from non-life, involves complex chemistry resulting in self-replicating systems resulting in life as we know it, all of those principles would apply there too.

Second, the assumption that the first life was a cell is likely wrong (except if God created life, and started with a cell, or some other such ad-hoc idea of course). Life is partly defined by self-replication, and self-replication is also what allows the optimization of systems for specific purposes via the processes of biological evolution (which requires, and is a consequence of, imperfect replication); meaning that as soon as you get a self-replicating system you're well on your way to having life - and the first cells as we know them likely developed quite far along that process, because they already are quite optimized.

In this perspective, the answer to your question is that there was never an issue of "the first cell" "deciding" to "replicate" - the first life replicated by definition - and whether it was a cell or not is a completely different issue.

Abiogenesis is an unanswered question of science, but if you want more ideas of what biologists think might have happened you could look here:

Otherwise I can't help but mention my favorite hypothesis of abiogenesis, which I find most exciting and (to my layperson eyes) convincing, and more importantly illustrates how "the first cell" could have been a fairly late step in the development of life. Here is a video of one of its originators talking about it:

Basically those researchers started out looking at the energy of the chemical reactions that make the building blocks of life, and figuring out how natural reactions could generate that energy. They found that the conditions that occurred in hydrothermal vents were conducive to such reactions:

In more recent papers they connect this to comparisons of existing cells to try and figure out which features the Last Universal Common Ancestor of all life had, and putting those things together they build a fairly coherent picture of the first "organisms" developing inside pores of the material of hydrothermal vents, involving chemical reactions that produced complex molecules which promoted the production of further such molecules (including proteins, enzymes and RNA that can both self-replicate and promote the creation of proteins), and the development of membranes not so much as a protection from the outside world but to maintain the energy difference between inside and outside the pores ("proton gradients") that further promoted the reactions in question, and bacteria and archae being the result of two independent events of cells "breaking off" from the porous rock and becoming free-living.

Here is a figure from that paper: 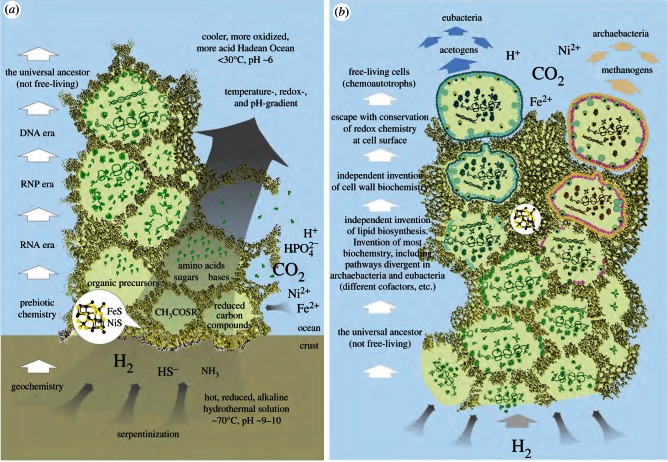 (And this goes a bit to my first point about there not having been a single first cell - you can see in this hypothesis there would have been many pores/reactions occurring along proton gradients/groups of complex molecules reacting in positive feedback loops/self-replicating systems/membranes forming/cells breaking off/etc at any one time, making it more likely for any one "step forward" (in quotes because it's only a step "forward" in hindsight; at the time it would be a variation among others) to occur somewhere in that population).

Here is a story,

Lets imagine that we go back a long long time ago.

Lets imagine a bunch of cells. Some divide. Some do not. And every so often a cell gets randomly damaged from UV light, toxic chemicals or just gets eaten by another cell.

And this is why cells divide. A self replication machine soon outnumbers a non-self replicating machines by virtue of being able to replicate.

There is no thinking required. Also no intelligent design is required either. Anything, any random mutation that makes the self replicating machine work better, even a little, will soon cause that better more efficient revision to out number the original version.

It isn't intelligence so much as water flowing down hill.

In fact that this is how some man-made ribozyme are made. A scientist first makes hundred of millions random RNA sequences. Then feed the mixture into a test for activity. If activity occurs the molecules is copied by RNA dependent RNA polymerase. And more copies are made... and since RNA polymerase makes many error... you have a mutation rate. The products go through another round of selection. And so on.

And when the scientist comes back later in the week... they have an efficient ribozyme. Did the scientist design this molecule.. some intelligent design? Nope. There was next to no intelligence in the design of RNA. In fact said scientist wants to study this mixture of ribozymes and find how they work.

In nature that test is simply survival. Being around as long as possible to replicate as much as possible.

First of all, there are cells that don't divide. For example, the nerve cells of mammal's central nervous system are shown to be very long lived and the rule is they don't divide through time. The same is true for most of their muscle cells, but yet, the point you infer is correct-cells do replicate, otherwise all the cells would have died of old age by now and the Earth would be lifeless. Therefore, the answer to your question is more in the line of the answer of the question: Why do there are always cells which want to divide? Do you agree?

Now, I have one question in the philosophy section that you may find relevant to yours. It's here. There I ask about the relationship between the ability to "act on your own" which is defined as agency there and the notion of choice-e.g. the ability of anything to move into different states in a non-deterministic way. I will cut down the philosophical terminology and give you the short answer I made for myself after reading and discussing this question in the Philosophy SE. Basically, the cell doesn't have a choice other than choosing to replicate. Yes, I know this answer may seem very hard to grasp but you need to think of the cell not as a free will creature as you are but as a kind of "computer" which has instructions in its "program", e.g. DNA when and where to replicate and when and where to stand still. So it has agency (the ability to choose) but it doesn't have free will on its own like you or I have. Just like a computer can't really choose what to do-it's its program that tells it what to do.

This is the answer to your question-there isn't such a thing as a "standpoint of a cell" because it really does not have free will. If it has no free will it can't have a "standpoint". Just like computer can't have "standpoints", too. It divides because it's programmed to do so. It only appears to us the first cell had any choice what to do and what not. The reality is the cell is nothing more than your computer with Windows OS. If Windows say-divide, it will divide (if of course, it was able to). There is no choice for the cell to divide or not. It's just what its program is. So, until there are cells programmed to make more copies of themselves which program their descendants to make more copies of themselves there will be cells dividing because the program is self-replicating. And just like any other computer virus until the hard drive (e.g. the environment) provides it with the means to reproduce-it will do so. Can you understand me?

P.S. If you however, kind of "translate" your question as to why the first cell had this "program" to replicate, then the answer lies in chemistry, not in biology. There is this thing called chemical evolution. It literally mean the origin of the "drive to reproduce" which eventually became the "drive" to divide was a direct result of the interactions between chemical, not biological reactions. And chemical reactions are deterministic, e.g. they have no free will. A reaction just can't possibly choose to occur, or not to occur. It happens under the natural conditions of the environment and when chemical evolution was eventually replaced by biological evolution the cause of the first became the cause of the other, too. This is how to explain the origin of the "will" of the cell to replicate and as you can see everywhere around you this "cause" is pretty much still in action everywhere. I hope you can get my point.

Not the answer you're looking for? Browse other questions tagged evolution cell-biology dna or ask your own question.

3
Evolutionary Cell Structuring
1
Evolution (Reductionism)
3
Very introductory online source of information in evolutionary biology
2
Hayflick limit and hair or nails
4
Why did viruses evolve in the first place?
7
What do white blood cells do with FOREIGN white blood cells?
3
Explain to a layperson how cigarettes smoke might cause cancer