Is a gene located in the sense or the anti-sense strand?

The given image shows a section of a dsDNA. 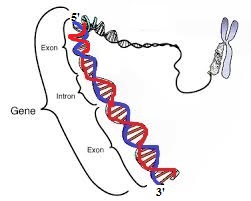 Suppose it's the blue strand to which RNA polymerase attaches during transcription. The resulting mRNA molecule then codes for a protein $X$.

So, which of the following is considered the gene?

a) The blue strand (anti-sense strand) to which RNA polymerase attaches during transcription and is the one that is technically read by the transcription machinery.

b) The red strand (sense strand) whose base sequence is the same as the base sequence of our mRNA molecule (except that thymine is replaced by uracil).

c) The DNA duplex as a whole, as shown in the above schematic.

None of the highlighted regions in your figure, is a gene. A gene is a section of DNA which gives rise to a product. Basically, a gene has an orientation (5'→ 3') i.e. it is essentially a single stranded region. However, the strand that mechanistically contributes to RNA synthesis (template) has the reverse-complementary sequence of the gene (in other words, anti-sense). Therefore, a gene, as it is annotated is not a functional entity but a genomic representation of a product. Some viruses (such as M13 phage) have a single stranded genome; for them the transcript is always antisense to the genomic DNA region.

Same section of dsDNA can harbour multiple genes in both orientations and this is clearly seen in viruses which have an highly compact genomes. Other prokaryotic and eukaryotic genomes also have overlapping genes.

Does that mean only the indicated region of molecule A is a gene? Or, does the Indicated portion of molecule A + Complementary portion present in molecule B comprise a single gene, such that A is sense and B is non-sense strand of the same gene?

If the molecules A and B are expressed from opposite strands, then they are considered products of different genes, even if the gene region overlaps.

The situation is more unclear if both the molecules are expressed from the same strand and the transcribed region overlaps. Sometimes they are classified under the same gene (splice variants) and sometimes they are not.

These are some lines from the human genome annotation file which tells the location of genes in the genome (+ and - denote opposite strands):

Bottomline: The definition of gene is constantly changing but usually a gene has an strand orientation. Specifically, if two different RNAs are synthesized from opposite directions but from the same dsDNA region, then they are said to arise from two different genes. (check out this review for some specific examples)

In referring to genes on a double-stranded DNA chromosome (the situation assumed in this question), the general and scientific usage of the term ‘gene’ includes both DNA strands.

The practical definition of ‘gene’ has come under scrutiny in recent years for reasons that will be discussed, especially in relation to the ENCODE project. However none of the discussions I have encountered considers restricting a gene to a single strand.

General and educational usage of the term ‘gene’

The term gene was coined in 1909 “to describe the Mendelian unit of heredity”, long before it was suggested and established that these units resided in the chromosomal DNA of organisms.

A reputable general dictionary, Mirriam–Webster, suggests a modern concept of the term, comprehensible to non-specialized readers, to be:

a specific sequence of nucleotides in DNA or RNA that is located usually on a chromosome and that is the functional unit of inheritance controlling the transmission and expression of one or more traits by specifying the structure of a particular polypeptide and especially a protein or controlling the function of other genetic material
e.g. “She inherited a good set of genes from her parents.”

And a similar definition is given to the medical profession in Morton and Spences Genetics for Surgeons.

Despite the knowledge of the complexity of genes that has accumulated in recent years, in two modern molecular biology text books the essential feature of the definition is that it is all-embracing rather than restrictive. Thus, the definition in Alberts et al. — Molecular Biology of the Cell is:

And the definition in the glossary of Lodish et al. — Molecular Cell Biology is very similar.

There are several features of the structure and the regulation of the chromosomal information specifying proteins that has led to a reconsideration of the use of the term ‘gene’. This in not merely a semantic concern, as the major ENCODE Project, the purpose of which was to provide an “Encyclopaedia of DNA Elements”, had the practical task of naming the elements it describes.

I have found a couple of useful articles by others, considering the problem at length. One is by Smith and Adkinson (2010) and the other is by Portin and Wilkins (2017). A brief summary of the situation that they discuss is that there are two main problems. One problem is the deviation from the ‘one gene — one mRNA — one polypeptide chain’ concept caused by alternative splicing, multiple promoters and alternative translational initiations sites. A second is the finding of regulation of transcription by sequences greatly distant from the transcriptional initiation site.

The general thinking is to redefine the term ‘gene’ in terms of networks or integrated interactions. Thus, Portin and Wilkins own proposal is:

and that employed by the ENCODE project is defined by Gerstein et al. as:

(It is supplemented by an ontological diagram that I shall not reproduce here.)

This is complex, but in relation to the poster’s concern one thing is clear, at no time are the authors concerned with strandedness, and there is no proposal that a gene is confined to a single strand.

One might argue that nobody mentions strandedness because everyone assumes a gene is on only one strand. Really? Anyway, I‘ll finish with a couple of mundane arguments that strandedness has no place in defining genes, overlapping or not.

14
Do transcription factors bind to both strands of DNA?
6
Which DNA elements belong to the definition of a gene?
3
On which DNA strand is TATA box present?
4
Can both the overlapping genes (in opposite strands) produce proteins?

4
Can a dNTP be built into a RNA strand?
6
Why is the DNA codon table "equal" to the RNA codon table
1
Are genes on the 5' to 3' strand only?
1
Relationship between DNA strands and mRNA
2
Is the promoter region of a gene transcribed?
4
Misincorporation of dUTP into DNA?
5
How does DNA codon (5`-3`) convert to mRNA?
0
Does a mutation in the sense strand of a particular gene affect the polypeptide formed?