Cortical projections from layers 2/3 back to 4?

As all excititory neurons in layer 4 are stellate - they have no apical dendrites that could project to layers 2/3. However, I have seen some diagrams showing axonal projections from layers 2/3 back to 4, but then I see other diagrams that don't show it.

Is there enough evidence to show axon projections from 2/3 to 4? If so why do so many diagrams leave them out?

One approach has been taken by some such as Binzegger et al., 2004 is to estimate intralaminar cortical connectivity based on co-occurrence within a given layer of axons and dendrites. This approach is an approximation, of course, because there is no guarantee that axons contact dendrites randomly within a given layer. For example, axons could preferentially contact the dendrites of inhibitory rather than excitatory cells, and this would fundamentally influence the circuit dynamics. 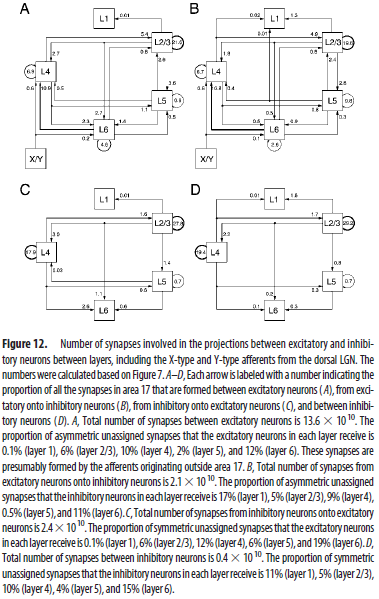 However, it is also possible that these connections preferentially target inhibitory cells rather than excitatory cells in layer 4: see Thomson et al., 2002.

It is likely that the variety in sources/diagrams you are familiar with is simply because people take different approaches to complex systems (and different approaches may be warranted in different situations). Some people choose to highlight the most salient features, perhaps the strongest layer-to-layer connections, in the hope that this produces an understandable, though simplified, model. Other people choose to highlight the vast complexity, emphasizing all of the smaller details that may actually be important.

For an analogy, a chef is likely to just deal with olive oil. They don't care that olive oil is actually a collection of several fatty acids: it's just olive oil to them, and the importance to them is that olive oil is distinct from another vegetable oil. A biochemist, however, might be interested in the specific fatty acids and might point out that those specific fatty acids are found in all sorts of other oils. Neither one is likely to convince the other that they have the better answer for all purposes.

Neither approach is strictly incorrect or better than the other, until better understanding makes one of the approaches obsolete.

Not the answer you're looking for? Browse other questions tagged neuroscience neurophysiology neuroanatomy or ask your own question.

33
How and where, in the human brain, are memories stored?
9
Why has evolution made neurons use spiking?
5
What (open) software there are for simulating behaviour of human (cortical) neurons?
0
Are cortical columns restricted to somatosensory cortical sections?
0
Cortico-cortical connections
4
Can you extract specific data from EEG
2
Why do neurons have long axons but short dendrites?