What is the inbreeding coefficient for the female offspring of a sib-mating in a haplodiploid system?

The inbreeding coefficient of a sibling mating for a diploid organism is 0.25 (each allele has a 25% of being identical by descent in the offspring).

In haplodiploid organisms, males result from unfertilized eggs, so they don't have fathers (they get half of mom's diploid genome, and that's it). Females have both a mom and a dad, and are diploid in the standard way (dads give their daughters their entire genome).

What is the inbreeding coefficient for the daughter of a sib mating?

From the same article on wikipedia:

The inbreeding is computed as a percentage of chances for two alleles to be identical by descent.

Now let's draw a family tree for such mating and sign chances for having each allele: 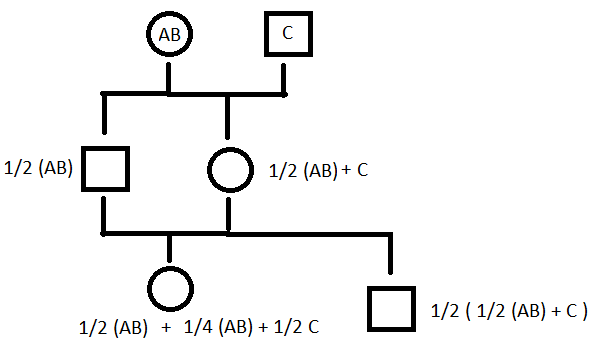 You can see, that the "brother" has a 50% chance of receiving A allele and the "sister" has a 50% chance of receiving A from their mother, but the "brother" will not have the C allele that the sister certainly has. Their daughter will have the allele from her father and one of mother's alleles. Therefore, her chances of having a C allele are 50%, and for a A or a B allele each 75% (remember, she needs two copies, so we need to end up with 200%; furthermore, she may have two A alleles but not more than one C allele). Chances of her having two A or two B alleles are 56,25% $$0.75 * 0.75 = 0.5625$$

Now we have the percentage of chances for two alleles to be identical by descent, her inbreeding coefficient is 56,25%.

The son will have only one allele, 50% for C, 25% for A and 25% for B. Because he does not have two alleles, by definition there is no inbreeding possible.

I'm thinking that the answer is not defined as there is probably an explicit or implicit assumption about both parents having the same ploidy (brother (haploid) and sister (diploid) in your question) in both the path and tabular methods used for calculating inbreeding coefficient.

Here's how I arrived at it:

The only way a daughter of a sib-mating can have an IBD (identical-by-decent) genotype is by being homozygous for one of the two alleles belonging to her grandmother (her mother and father's mother).

There is no way for her to be IBD for the allele that her grandfather has, because that allele can never end up in her father (who only gets an allele from his mother, because he's haploid).

Since this can happen for EITHER allele from the grandmother, this must be multiplied by 2, giving our final inbreeding coefficient of F=0.25 or 25%.

Not the answer you're looking for? Browse other questions tagged genetics population-biology or ask your own question.

9
What is the effective relatedness of inbreeding?
2
What is working definition for female infertility?
2
What's the exact meaning of and how to derive the coefficient of the path from sire to offspring?
4
What determines the sex of hybrid offspring?
2
What is a typical value of the selection coefficient s?
3
What is the relatedness of sisters in a haplodiploid system if you mate virgin queens with 1 of their sons
0
Can you calculate the coefficient of inbreeding (F) without a family history?