What inactivates pepsin in infants?

In infants, rennin helps in digestion of milk. Pepsin is also present in their stomach.

Why do infants need rennin for milk digestion, at the first place? Why does pepsin not act on the milk proteins in infants? Does the production quantity of rennin play a role in inhibiting the action of pepsin?

EDIT: Thanks a lot to @abukaj for pointing out the mistake in my answer (and to @paracetamol for asking such a beautiful question). I am rewriting my answer to incorporate the (hopefully) correct background knowledge this time.

NEW ANSWER: As @paracetamol and @AlanBoyd (in their answer) pointed out the lack of credible support for the claim that infants produce rennin/chymosin, the previous answer attributing the digestion of casein in infants to chymosin had to be corrected. So, lets now look at the other possible candidates for casein (or, more specifically, $\kappa$-casein) digestion in infants.

As Martin et. al. (2016) claim, milk casein has some bioactive roles, such as forming masses with calcium and phosphorus1. Also, infant milk formulas mostly have higher casein content than human breast milk, making the former harder to digest than the latter. Back to the digestion point, human breast milk is known to contain many proteases in itself, including anionic trypsin, elastase, plasmin, cathepsin and kallikrein, while prothrombin has also been identified in human colostrums2. In fact, Ferranti et. al. (2004) also identified fragments of casein created by plasmin cleavage3. However, Chatterton et. al. (2004) were able to detect $\beta$-casein after 1 hour of in vivo gastric digestion in 8 day old infants, but not in 28 day old infants, suggesting the increase of digestive capacity of the infants4. This increase can be attributed to the development of gastric acid production system in the infants. For the case of newborns, Nakai and Li-Chan (1987) suggested that Pepsin C, also called gastricsin, can hydrolyze casein at the pH range of 4-5 (the lowest pH newborns can reach)5. However, the buffering effect of human and bovine milk proteins does not allow the gastric pH to reach the optimum pH required for activity of pepsin A and pepsin C.

How, then, is casein digested by infants at all? This is summarized (to some extent) by Chatterton et. al. (2013), according to which, although gastric pH is unable to reach the optimum pH for pepsin activity, it is sufficient for minor initial digestion of human milk proteins. This causes the release of glycomacropeptide, the C-terminal portion of casein. The combination of this initial digestion and the gastric pH, close to the pI of caseins (~ pH 4.6) causes precipitation of caseins and slowing down of their digestion. The casein peptides, on the other hand, are absorbed into plasma where they show a number of biological activities, including inflammation modulation and blood pressure regulation6.

Thus, even though infants lack chymosin and a fully mature digestive system, this is compensated by a combination of proteases in breast milk and the slower digestion process until the digestive system of the infants develops completely. 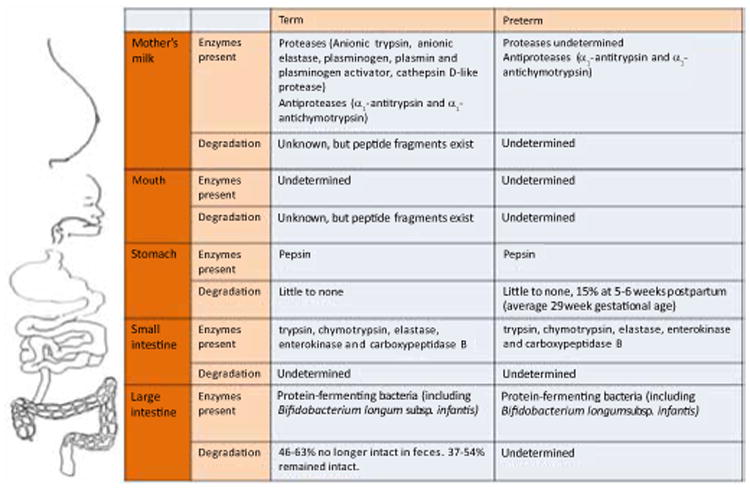 Milk contains a protein called caesin which gets digested in an adult body with the sole help of pepsin.But pepsin requires lower pH for digesting caesin. Since infants are basically fed on milk and they have a higher pH which makes pepsin incapable of digesting caesin in their body.Therefore infants need an enzyme named renin for this purpose.

1
Which enzyme curdles milk in human infants?
90
Are humans the only species who drink milk as adults?
11
Do humans produce rennin?
6
Digestion of milk in humans

7
Why Do Ruminants Require A Multi-Compartment Stomach To Digest Food?
4
How does hydration affect digestion?
4
Betaine HCl stomach pH
2
Does the pyloric sphincter contract after ingesting only liquid?
4
Why do humans cook animal meat
11
Do humans produce rennin?
1
Are casein proteins in UHT milk digestable for infants or toddlers?
34
Why do animal cells "mistake" rubidium ions for potassium ions?