Where do the antibodies that trigger the specific immune response come from?

In A level Biology, we are taught that in order to trigger the specific immune response of the body, antibodies must first attach to the pathogen. The macrophages contain antibody receptors, and this allows them to attach to the antibody carrying pathogen and subsequently engulf them by phagocytosis. This then triggers a certain pathway that involves T helper cells activation, which release cytokines to cause differentiation of B helper cells into plasma cells, and THESE release the antibodies.

The question is: where do the antibodies that start off the whole process even come from?

First: What your teacher says about the free floating antibodies is not correct. The first contact with a new antigen to generate specific immunity is done by naive B cells which have a membrane bound B cell receptor and their effector T cells. This contact can either happen directly or by the presentation of the antigen to the cell by antigen presenting cells (APC).

Short answer: These naive B cells are present in our body without antigen contact, but are not highly specific.

To begin with, naive B cells express antibodies as a membrane-bound version, the so called B cell receptor. The antigen specificity of these receptors is random and occurs before the individual had contact with the antigen. These receptors bind a wide variety of different antigens, more or less good. This is the so-called affinity of the receptor (or the antibody) against an antigen.

Upon binding of an antigen, the B cells get activated (if the receive a co-stimulatory signal from a T cell). When activated, the cells starts to proliferate and to differentiate, as shown in the figure below (from here).

Basically, the cells start to re-arrange the genes which are responsible for generation of the variable region of the antibody (the part which does the actual binding of the antigen) to generate highly specific high affinity antibodies to the antigen and then mature into relatively short lived plasma cells, which produce big amounts of antibodies and long lived memory cells. The later are dormant in the body and get reactivated, when the body is challenged by the same antigen, against which it already produced highly specific antibodies.

When re-exposed to an antigen, the antibodies in the blood stream bind to the antigen and mark it for phagocytosis. The phagocytes will then take up the antibody bound antigen, process it and present parts of it on their surface to B/T cells. This either starts the process of selection and clonal expansion as described above or if there are specific memory cells, these cells will proliferate and differentiate into antibody producing plasma cells.

The initial process of adaptive immunity takes about two weeks until highly specific antibodies are available, if you only have to "wake up" the cells from the memory pool, this will take a few days. This is also how vaccinations work. See also the Wikipedia page on Antibodies for much more details.

To address your question about antibodies, produced by antigen-specific B cells or plasma cells, I'm first going to address how you activate a B cell.

The ways that B cells are activated differ and I think you can get an idea here in 9.1 and 9.2. The take home point is there are T cell dependent and T cell independent pathways, but typically multiple cells are involved.

So to be certain, however, antibodies come at the late stage of infection, they do not start the process. As a matter of first response, you typically have the innate immune cells and the complement system responding. B cells have complement binding proteins that can link innate and adaptive immunity, like CD21.

Also, In the case of allergic reaction, it's different because it requires a priming stage by an initial contact with an allergen, and then the IgE antibodies present on mast cells during the second encounter cause the reaction, but here we'll focus on pathogens.

The entire process of antibody production takes place generally at the B cell receptor locus. The B cell receptor is expressed as two insoluble isotypes in a naive, circulating B cell: IgM and sometimes IgD. Keep in mind that secreted IgM and membrane IgM are structurally different. BCR IgM is monomeric, not pentameric like its secreted counterpart. The significance of IgD is also under investigation, but some research shows it's indispensible for responding to large multi-valent antigen when the B cell is already anergic (ref).

Whether the antibody is membrane-bound or secreted depends on post-translational modification, and these are affected by the activation state of the B cell (I like this reference). So when the B cell activates as it does in the above reference, either T-dependent or T-independent, two things are necessary: The antigen stimulation, and specific cytokines. Take a look at the B cell receptor locus: 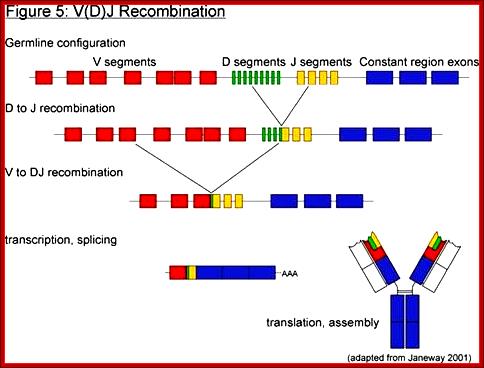 You get an immunoglobulin by taking the variable region produced by VDJ recombination and attaching it to a constant region. The Ig locus has multiple constant regions: Cµ, Cy, Cα, Cδ, and Cε. When it wants to produces IgM and IgD, it transcribes a long mRNA V-Cµ-Cδ and then the cell edits the mRNA into V-Cδ or V-Cµ. The mu and delta C regions are spatially separated so that they are co-transcribed but the other C regions are not. Then it translates and modifies the protein to get a secreted or membranous Ig. B cells that secrete antibody are activated and a referred to as plasma cells.

But, if you're being stimulated by interferon-y at the same time, B cells can class switch to IgG by editing the gene locus so that the mRNA produced is V-Cy. If the cell is receiving Th2 cytokines like IL-4, it can make IgE by editing the gene so that the mRNA is V-Cε. The B cell actually deletes the other C regions in the DNA so it never reverts back. I go over class switching here.

Does that make sense? The antibody requires a concerted effort of other cells, and intracellular splicing and protein-modification machinery. See my favorite text, cellular and molecular immunology, 8th ed. for a powerful reference.

From Immunobiology: The Immune System in Health and Disease. 5th edition.:

Not the answer you're looking for? Browse other questions tagged immunology immune-system immunoglobin or ask your own question.

3
How specific is the adaptive immune response?
5
What is the purpose of requiring two separate binding systems for the antibody response?
4
What is the mechanism by which passive immunity works?
5
What do memory cells actually do?
3
Could there be a pathogen which does not activate an immune response?