I am new to this community, and I was wondering if insects could metabolize poisons. I'm not sure if I use the correct concepts, I simply wonder if insects can get rid of non-lethal doses of insecticides, and live as they have never been exposed at them. I know that human liver does this task for us, but I don't know if insects have this mechanism.

Insects absolutely can metabolize poisons. This is because plants are absolutely chock-full of them, precisely to avoid insect predation, and in return many insects have developed immunities to many of these poisons. Or as this paper "DETOXIFICATION OF PLANT TOXINS BY INSECTS", which looks like it would be the answer to your question if it were free to read says:

It is estimated that all plants contain some type of defensive compound (Rhodes and Gates, 1976). However, plant defensive compounds are not universally toxic to insects (Janzen, 1979). Since almost all plant species are attacked by some insects (Schoonhaven, 1972), it is obvious that phytophagous insects have been able to develop countermeasures which allow them to feed successfully (Jones, 1972).

There are three main ways for an organism to neutralize a toxin: sequestering it where it will not harm the rest of the organism (and conveniently, may make the organism itself toxic to its own predators), excreting it (i.e. getting it out of the body altogether) and metabolizing it, i.e. chemically converting it into safer compounds. Often you will actually get combinations of those.

The first page of the paper sadly does not get into details about the extent to which insects use the third strategy, but it clearly states that they do.

This picture from Wikipedia shows some of the digestive organs that contribute to metabolizing toxins: 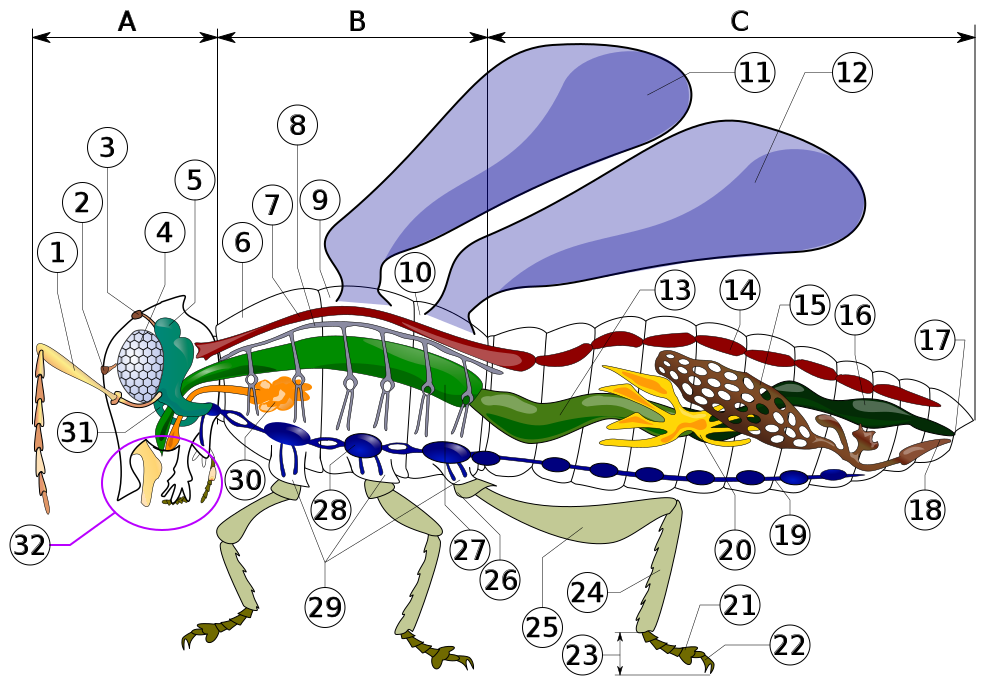 Organs that appear to deal with neutralizing toxins include the midgut (13), the fat body (not pictured), the hemolymph (not really an organ, it's the blood-equivalent liquid that all the organs bathe in), and the Malpighian tubes (20), though the latter (the apparent equivalent to our kidneys) probably serve more to physically get rid of the toxins than to metabolize them. From the Wikipedia page :

In insects which feed on plant material containing noxious allelochemicals, Malpighian tubules also serve to rapidly excrete such compounds from the hemolymph.

Some small organic molecules are also actively transported into the tubule lumen by the transcellular pathway, including alkaloids (plant compounds which may be toxic to the insect).

This PLoS One paper (so, free to read) studies the enzymes that insects use to metabolize some toxins and notes among other things that:

One of the best studied examples is the CYP gene superfamily of Papilio butterflies (Papilionidae), which have adapted to furanocoumarins, the toxic components of their food plants [15], [16]. These toxins are degraded by inducible CYPs that are expressed in the midgut and also in the fat body [17], [18].

For Tyria, senecionine N-oxygenase (SNO), a soluble enzyme located in the hemolymph, has been shown to convert the pro-toxic free base efficiently into its non-toxic N-oxide [22] (Figure 1).

Another paper, "Chemical detoxification vs mechanical removal of host plant toxins in Eucalyptus feeding sawfly larvae (Hymenoptera: Pergidae)" describes how some sawfly larvae have special mechanisms for getting rid of and sequestering toxic oils, but also says :

The oil sequestration is, however, incomplete and chemical gut content analyses by gas-chromatography (GC) revealed that 1,8-cineole does enter the midgut and is metabolised to hydroxycineole.

Another paper studying a class of enzymes generally associated with detoxification (but note the paper itself is about how those enzymes have other roles as well):

Insect monooxygenases can be detected in a wide range of tissues. Highest monooxygenase activities are usually associated with the midgut, fat bodies and Malpighian tubules [9], but again the expression of individual P450s can vary between these tissues [17].

Insofar as insects have an equivalent to our livers it would seem to be the fat body. Like the liver this organ has many functions, including fat storage, energy metabolism and regulation, but also metabolizing toxins. From "INSECT FAT BODY: ENERGY, METABOLISM, AND REGULATION" (free to read):

Whereas many insect tissues have vertebrate analogs, the fat body is an organ unique to insects (77). The fat body is a relatively large organ distributed throughout the insect body, preferentially underneath the integument and surrounding the gut and reproductive organ (36). Unlike the solid structure of the liver, the insect fat body is a loose tissue.

Most of the insect’s intermediary metabolism takes place in this organ, including lipid and carbohydrate metabolism, protein synthesis, and amino acid and nitrogen metabolism.

In addition to its role related to storage and utilization of nutrients, the fat body is an endocrine organ (65), produces several antimicrobial peptides (44), and participates in detoxification of nitrogen metabolism (74).

And from the other link:

As in vertebrates, the oxidative metabolism is mediated via the tricarboxylic acid (TCA) cycle and the electron transport enzyme systems. The fat body contains enzymes mediating the gluconeogenesis process as well as enzymatic systems with a detoxification role to manage harmful endogenous metabolites and toxic xenobiotic compounds. Detoxifying enzyme systems include microsomal mixed function oxi-dases, in which the cytochrome P450 is predominant, various hydro-lytic enzymes (esterases, phosphoesterases), and conjugating systems.

Not the answer you're looking for? Browse other questions tagged entomology poison or ask your own question.

3
Can insects feel pain?
3
Why are bacteria immune to snake poisons?
6
Can Biting Insects Detect Specific Places On A Host Body?
10
How can insects survive without an adaptive immune system?
23
How do burrowing animals get enough oxygen?
4
Can insects or mosquitoes be astonished(shocked)?
1
Can you identify these tiny black insects please?