What kind of larva is this? (Southern CA, USA)

I need help identifying this larva: 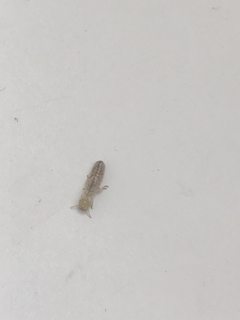 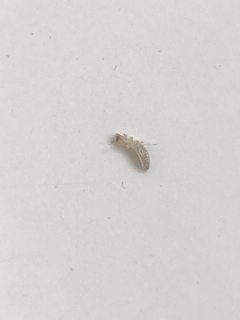 There's about a dozen of them in my parents' bathtub and I'm not sure what they are or where they are coming from.

They are about a centimeter long, maybe a little less. They look flat and are hardly noticeable. When they are upside down they look more like a maggot.

My parents didn't even notice until I pointed them out. They move around very little and stay at the bottom of the tub. I haven't seen them anywhere else.

That looks a lot like a Common Southern California Termite. I would check any wood that you have around your home just to prevent any damage. If you want more information just look it up online, but that's most likely what it is.

Note the eyes, the short, segmented antennae, the mandibles (better seen in your second photo.)

These look like termites, and based on appearance and size they are likely Drywood Termites of the family Kalotermitidae.

However, without mature soldier or swarmer specimens, conclusive species ID is very difficult.

According to Orkin, there are 3 distinct groups into which termites are divided: subterranean, drywood, and dampwood.

Since the worker termites in these groups more or less look the same, the appearance of the reproductive caste (alates) [or swarmers] and soldiers is important..

However, It is critical to identify the species of destructive termites to formulate an appropriate control program.

According to this UC IPM page, there are at least 23 different species of termites in California.

I'll give you support for the options that I think are most likely:

My initial guess is that you have some species of drywood termite (family Kalotermitidae), because these are common.

However, even given that initial guess, another UC IPM page suggests that drywood termites are not often seen:

Drywood termites are cryptic insects that are difficult to detect. They live deep inside wood; and except during periods when they swarm or when repair work is being done on infested homes, they are seldom seen.

If your specimen is a drywood species, it is most likely the western drywood termite (Incisitermes minor). 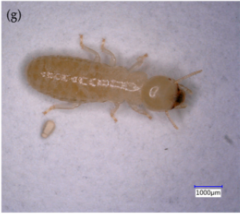 Based on size, it is more likely that you have a drywood species vs. a subterannean species.

However, again, without more evidence (frass vs feeding tubes and/or pictures of mature soldiers/swarmers) a definitive ID will be difficult.

I advise that you contact a local exterminator or termite expert to have them check your parent's house more closely.

$^†$ Note: "pseudogate" = a blind wingless nymph performing some of the functions of a worker. [See here].