When is an anatomic entity named "laterale" vs. "lateralis"?

In that case it's "laterale". But in a case like "Nervus cutaneus antebrachii lateralis" it's "lateralis". What's the logic here? How do I remember the right one?

This is actually much more of a lesson in Latin linguistics/grammar.

The root, Lateral, comes ultimately from latus meaning “side" or "flank” in Latin. [Source]. 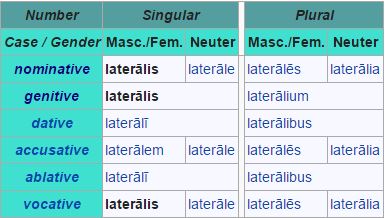 Let's break down each of these anatomical structures to understand the agreement-induced inflections [Source]:

os cuneiforme laterale - each of these words is neutral/singular:

Note: you see a shift to the genitive case for antebrachii because in this instance this phrase means "Lateral cutaneous nerve of the forearm."

Not the answer you're looking for? Browse other questions tagged human-anatomy terminology anatomy etymology or ask your own question.

2
Identifying internal structures of dissected fish
6
What is a lip? (upper lip and lower lip)
7
What is the context in which a species gets the name "elegans"
6
Branch taking over a tree trunk
2
Do biologists use the word "solubilize" to mean "dissolve"?
5
For which wing characteristic are Plecoptera (stoneflies) named for?