Why are ammonium ions reabsorbed in the thick ascending limb during acid secretion?

In order to produce HCO3- from glutamine and to subsequently reabsorb it, H+ ions need to be secreted. The kidney does this by via ammonium ions in the PCT. But why are the ammonium ions then reabsorbed in the TAL before being put back into the collecting duct? Wouldn't it be more efficient if they were just left in the tubule fluid where they would reach the collecting duct eventually? The first method seems to be a longer way of achieving the same result.

Isn't it all to do with the reabsorption of water, i.e. everything gets flushed out in the Bowman's capsule and then some stuff is reabsorbed to lower the water potential of blood, so water is reabsorbed as well.

I guess I figured it was easier to have a leakier sieve at the Bowman's capsule than try to only release the waste products via facilitated diffusion.

This is an excellent question. When you find an odd, seemingly inefficient aspect of physiology, it's an opportunity to learn something new.

This alternating secretion, reabsorption, and secretion starts to make sense when you look at the anatomy of the nephron. 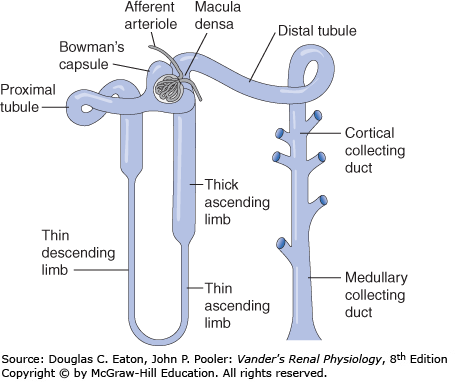 There is no appreciable ammonia in the filtrate at Bowman's capsule (free ammonia is efficiently converted to urea in the liver by the urea cycle, so it's in very low concentrations in the blood). As you say, it is produced in the proximal convoluted tubule. The amount that is produced is regulated by the acid load (more acid, more ammonia production). The proximal tubule is in the cortex (top of the photo).

$NH_4^+$ is in equilibrium with $NH_3$ in the tubule, and renal tubular cells and junctions are relatively permeable to $NH_3$ here, so the more $NH_4^+$ is produced and actively pumped into the lumen, the more $NH_3$ backflow leaves the tubule and enters the ECF. Because of this, the primary work of the PCT in acid base homeostasis by the kidney is not secretion (though $NH_4^+$ is actively secreted here), but rather in the production of new $NH_4^+$ and new $HCO_3^-$.

This is a process known as the countercurrent multiplier. The same principle is used to create a hyperosmotic ECF (and consequently, allow for a hyperosmotic urine if you've been wandering in the desert for hours).

Here's a diagram of the nephron from a decent review article that illustrates each of these processes for ammonia handling: 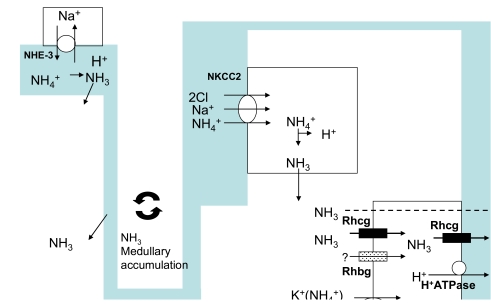 Not the answer you're looking for? Browse other questions tagged physiology kidney balance or ask your own question.

0
Which processes are during the latent period of ventricular contraction?
0
Why does increasing the space constant increase conduction velocity in myelinated neurons if nodes of Ranvier are constantly spaced?
4
Why is urobilinogen reabsorbed from the gut just to be excreted via the kidneys?