How can grass-fed livestock generate fat?

How can herbivorous cattle get fat? These animals eat only grassy substances, think of cattle, buffalo, goats etc. For example, wheat grass contains 0% fat, and its nutritional value is limited to carbohydrates and fibers. Still, livestock can have substantial (10%) fat content and give milk with lots of fat on top of it.

Where does that fat come from?

Short answer
Plants typically store energy in the form of starch. Animals, including livestock and humans for that matter, can digest starch, metabolize it into acetyl-CoA and turn it into fat.

Background
Plants contain sugars, formed by photosynthesis. Plants generally do not store energy in the form of fats, but in the form of starch, a glucose polysaccharide*. Animals digest this starch through hydrolysis catalyzed by the enzyme amylase back into glucose (Fig. 1). Cellulose is another polysaccharide. In grass-fed cattle, it is mainly cellulose that forms their source of energy. Cellulose cannot be digested by ruminants (cattle, goats, sheep) as they are unable to synthesise the enzymes needed to digest cellulose and other plant compounds. Cellulose can be hydrolyzed by cellulase enzymes in e.g. Ruminococcus species present in the ruminant tract in the guts of these animals. The cellulase enzyme endoglycosidase cleaves the disaccharide cellobiose from cellulose, and another type of enzyme, β-glucosidase hydrolyzes cellobiose into glucose monomers (sources: Microbe Wiki, University of Waikato).

Glucose is then degraded to pyruvate by aerobic glycolysis in the cytoplasm of the cell. Pyruvate is then transported into the mitochondria, where pyruvate dehydrogenase oxidatively decarboxylates pyruvate, forming acetyl-CoA and other products (Fig. 2).

Acetyl CoA can then serve as a substrate for citrate synthesis. Citrate, in turn, can be transported out of the mitochondria to the cytoplasm. There it can be split to generate cytoplasmic acetyl-CoA for fatty acid synthesis under the influence of anabolic factors like insulin in times of plenty (Fig. 3), referred to as lipogenesis. 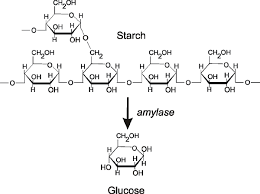 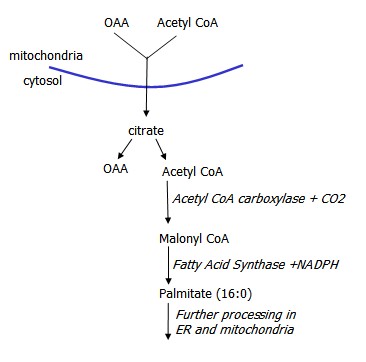 *: Although plants usually store their energy reserves in the form of starch, there are important exceptions to this. Most notably certain seed pods, like peanuts and walnuts, contain substantial amounts of fat. Further, cell membranes and other components will add traces of fatty substances even in grassy plants. With credits to Marzipanherz.

Same way animals can turn sugars to fats, chain reactions involving multiple enzymes. Some plants, e.g. potatoes, rice etc. will store very little fat. Most plants will only store a bit of fat in the seeds, but some - I guess nuts and olives are the main ones - will convert significant amounts of glucose (produced by photosynthesis) to fats, which we can eat, or extract oil from. Edit: Looks like there's some good info here, but a bit dense :lipid biosynthesis

Not the answer you're looking for? Browse other questions tagged zoology metabolism fat-metabolism or ask your own question.

4
Can the human body create glucose out of fat?
1
Is there such substances that body can only send to storage (as fat)?
0
How are micelles formed from the byproducts of emulsification in fat digestion?
1
Can the Na+/K+ pump backwards to generate ATP?
1
How much fat can the body absorb? Implications for daily fat distribution
0
How much energy is used to construct a pound of fat tissue?