How can calcium be a kept as a local signal in the cytoplasm?

We went through this in my class last week and it doesn't make sense to me at all.

It's small and it diffuses in and out so easily so wouldn't it diffuse out quickly and thus not be a local signal? Or where it's stored in the RER does that change things?

As @BryanKrause says in his comment, net flux of calcium would not ever be from inside the cell to outside the cell. There is a large gradient the other direction. Per Berg, the cytosolic concentration of calcium in a resting cell is on the order of 100nM, while extracellular concentration is in the mM range.

Signalling occurs when channels open up and allow $Ca^{2+}$ to diffuse down that very steep electrochemical gradient (from extracellular or topologically similar sources, e.g., the endoplasmic reticulum).

At least part of your question seems to involve a concern that the signal would not be very long lived. Though your concern about it diffusing out of the cell isn't warranted, the question about the time dynamics of calcium signalling is interesting. Calcium signals are, in fact, often very brief (though in other cases they last much longer). This is actually a benefit, and is one reason these signals can have very localized, very brief effects. For localized membrane fusion events, e.g., exocytosis, the signal lasts on the order of microseconds. The control of the time and position of a calcium signal involves a large number of players, including sequestering proteins, various compartments and stores, and tight control of the balance between calcium on and calcium off signals. It is discussed in this nature review, and summarized in this simplified figure: 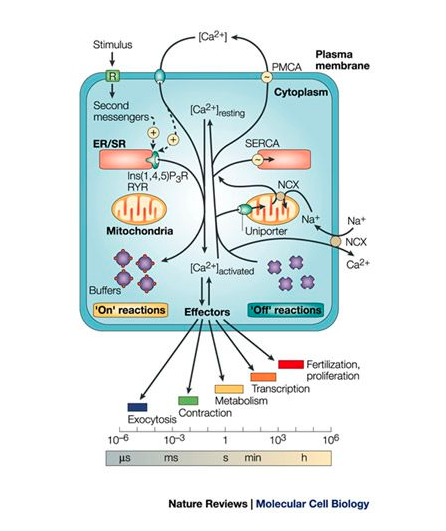 Calcium ions hold a +2 charge, and thus are unable to diffuse through lipid membranes. It is stored in the ER, and released to act as a signaling molecule in the cytoplasm. Being unable to cross membranes it remains in the cytoplasm until it is actively transported back into the ER.

3
How do GPCRs transmit a signal across the plasma membrane?
5
How can a ligand be an integral membrane protein?
2
Are there histones present in the cytoplasm?
7
How do chameleons signal cells to change color?
6
How do DNA, enzymes, hormones etc. reach their proper cellular locations?
6
At what calcium concentration does the Sodium-Calcium Exchanger (NCX) "turn on"?
11
Does the cytoplasm include the organelles?