Will meat rot in alcohol below freezing?

I understand that freezing slows decay but I'm wondering what will happen if meat is kept in below freezing temperatures while submerged in a liquid that has a lower freezing rate, like alchohol?

Ethanol and water are miscible, meaning they are perfectly soluble in one another in all proportions. So given enough time, the alcohol will likely seep into the tissues and cells of the meat, and some water will seep out into the surrounding alcohol bath. The liquids might not equilibrate very well on a reasonable time scale, that is, the bath surrounding the meat could remain mostly alcohol with some water, and the tissues of the meat could contain more water than alcohol. This is because the biological barriers of the meat interfere with the diffusion of the fluids to reach a mixture of equilibrium proportions. However, in theory, cell membranes are permeable to ethanol, so given enough time soaking we might build up a useful concentration of ethanol within the meat.

Note that it doesn't matter so much what happens outside the meat - being bathed in a substance that remains a liquid below 0 °C won't necessarily stop the meat itself (well, the aqueous solutions within it) from freezing. That is why the considerations of solubility and permeability are crucial. As I said, for ethanol we have perfect solubility with water (miscibility), and possibly sufficient ability to diffuse throughout the organic catacombs of our meat. So, assuming ethanol can sufficiently perfuse the tissues and enter the cells, what would happen? 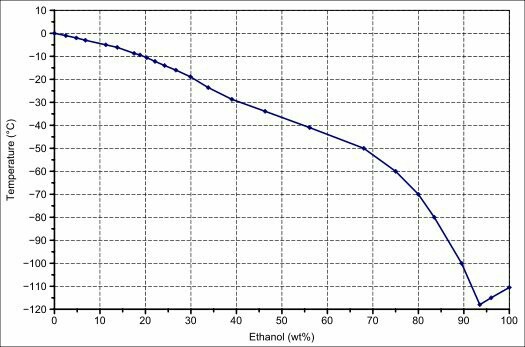 (Note that the freezing point at 100% ethanol seems to be -111 °C according to this data; this should technically be freezing point of pure ethanol itself, so we would expect it to be the -114 °C figure I quoted earlier. But that small discrepancy between this experimental data and the traditionally accepted number will not affect our analysis.)

So, as you lower the temperature, the water-ethanol solution in the meat will begin to freeze. It will freeze at some temperature lower than normal because of the ethanol present. Note that the normal freezing point of water in meat is already going to be lower than 0 °C due to all of solutes inherent in such a biological system (ions, sugars, metabolites, maybe a few stray amino acids, etc). As it freezes, the water will freeze first and leave the ethanol behind.

So, inside the meat, you will see the meat freeze at slightly lower than normal, with some liquid remaining in the tissues which would be the ethanol. Outside the meat, in the bath of ethanol which has drawn some water out of the meat, you will see that water forming ice on top of the liquid, which will become purer and purer ethanol as the water freezes out of it. The process I just described is fractional freezing, and you may be interested to know it is how "ice beers" (Keystone Ice, Natty Ice, etc) are made more alcoholic.

Now, if the proportions of ethanol and water are just right, something interesting happens. Instead of the water freezing first and precipitating out of the ethanol, a special eutectic solution is formed that freezes all at once. (Perhaps you've heard of fractional distillation and azeotropes, the the boiling point analogue to fractional freezing and eutectic mixtures). On the graph above, the eutectic mixture is achieved at the very minimum value, around -118 °C. Note that freezing point of the eutectic mixture is lower than the freezing point of pure ethanol alone. Unfortunately, for the specific case of water and ethanol, reaching that special point of bonus freezing point depression requires the solution to be almost completely ethanol (about 93%). That would be the holy grail of lowering the freezing point of your meat, but it's likely not feasible to replace that much water with ethanol throughout the meat.

So, in conclusion: It's what happens inside the meat that counts. If you bathe meat in ethanol, a useful amount of ethanol may permeate the meat. The freezing point of the meat (rather, the aqueous solution within it) will be lowered the more ethanol perfuses it. In theory, you could even drop that freezing point below that of ethanol itself, but it would require replacing nearly all of the water with ethanol.

Not the answer you're looking for? Browse other questions tagged food alcohol bacterial-toxins parasitism decomposition or ask your own question.

14
What are the evolutionary niches differentiating an apple from a pear?
18
Why do specifically bananas go brown quicker in the fridge?
4
What really causes the toxicity of wrongly-thawed meat?
2
What is this grainy surface on my two-week-old sourdough starter?
3
Are peanut proteins similar to chicken meat proteins?
0
How Does The Presence of Livestock on Land Increase Net Methane Production?
1
Why most small organisms seem not to be interested in any organic matter which has all moisture removed?