Why is pollen used as a dietary supplement?

Sporopollenin is the hardest biological substance and can't be degraded by any know enzyme (my school textbook). Then why is pollen used as a dietary supplement if it can't be digested?

Bee pollen contains high concentrations of reducing sugars, essential amino acids and unsaturated/saturated fatty acids. It contains minerals such as Zn, Cu, Fe, and high K/Na ratio and significant quantities of several vitamins. Note that the composition of it varies greatly depending on their botanical type and the techniques used by industries. It is basically the collection of pollen grains from flowers made by worker honey bees with nectar and salivary substances.[Source 1](Page 1) [Source 2] 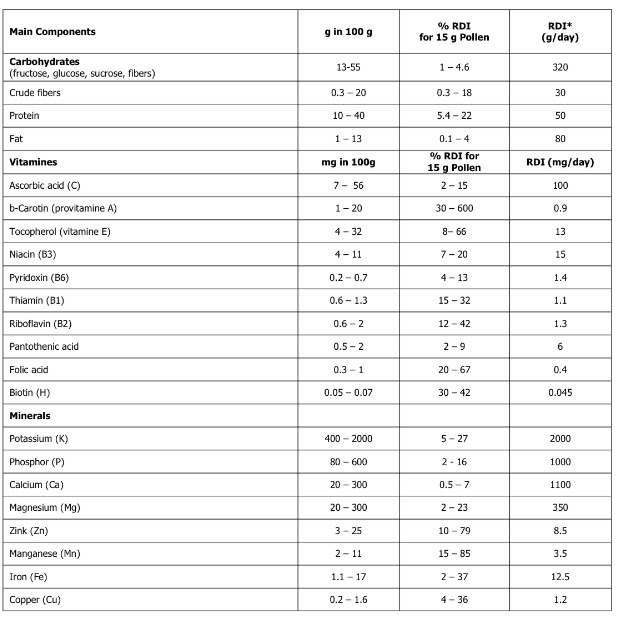 The claimed benefits of bee pollen are based on biological and therapeutic activities. The main components are phenolic acid derivatives and polyphenolic compounds. They are known to possess properties such as anti-oxidant, anti-aging, anti-carcinogen, anti-inflammatory, anti-atherosclerosis, cardio-protective and improved endothelial functions. However, it is unknown that treatments with such products are effective or not and how to minimise the health risks.[Source 1](Page 5) [Source 4] [Source 5] [Source 6]

Different studies were conducted in mice on the nutritional effects of bee pollen. It improved food digestion and also improved reproduction rates. Chickens fed with bee pollen had a better development of the small intestine. This suggested that bee pollen helped in early development of the digestive system. Bee pollen is also taken as a supplementation by athletes for improvement of performance. Controlled experiments indicated that no positive benefits were obtained. However, the number of training missed due to respiratory tract infection was lower in the bee pollen treated group.[Source 1](Page 5)

Doubts have been raised, whether the tough shell of pollen can be breached and digested by humans. It was discovered in animal experiments that pollen did not retain its content after leaving thedigestive tract. This gave rise to the hypothesis that the nutritional content of pollen was released by the digestive juices in animals (Schmidt & Schmidt, 1984; Roulston & Cane, 2000). In humans it was once shown that pollen was absorbed in the digestive tract (Jorde & Linskens, 1974) or that it was partly digested, (Franchi et al., 1997) whereas there were differences in the degree of digestion of poppy and hazelnut pollen, with an average degree of digestibility of 15% for carbohydrates and 53% for proteins.

In this case it has been hypothesized that pollen was insufficiently digested and that cracking would improve the digestibility and bioavailability (Rimpler, 2003). Different companies offer cracked bee pollen, claiming that this product is better digested. On the other hand, there are many studies in humans with whole bee pollen showing that a part of the bee pollen content is digested and is bioavailable. However maceration of pollen for several hours in water or other liquids is recommended in order to improve digestibility, this method is used also for other heavy digestible grain products.[Source 1](Page 3 & 4)

Non-bee pollen are called flower pollen. Extensive health relevant research has been conducted on pollen prepartions from non-bee pollen. It is marketed under names such as Cernitron, Cernitol, etc. It is known to decrease prostrate hyperteophy in rats, but there was no relevant changes in blood levels of LH, FSH, testosterone or dihydro-testosterone.

In patients with prostatic adenoma the improvement was in nycturie, important decreases in the residue post-urinate and in long term treatment, also decrease in the diameter antero-posterior of prostate. The urinary debit did not suffer any changes. The effect on the other symptoms usual in the hyperthrophie benign of prostate was not of statistical significance (Bruneton, 1999).[Source 1](Page 7)

Improved bioavailability is important in the pharmaceutical industry in that it reduces costs and increases the effectiveness of drugs. Previous studies have shown that this enhancement is possible using exines from pollens and plant spores. In one example the ingestion of ethyl ester derivative of EPA (eicosapentaenoic acid) encapsulated in sporopollenin microcapsules from L. clavatum spores improved the bioavailability of EPA in the bloodstream. In these trials, six volunteers ingested 4.6 g of fish oil containing 20% of the EPA ester, both alone, and encapsulated, as a 50% fat content powder, respectively. The bioavailability of the active was defined by area under curve (AUC (area under curve) 0–24 h). The mean AUC 0–24 of EPA from ethyl ester with exine was remarkably 10-fold higher than the corresponding for ethyl ester without exine encapsulation.

In other unpublished studies involving human volunteers, ingesting a lipophilic active, the enhancement of bioavailability has been very similar. The mechanism by which such enhanced bioavailability is achieved is intriguing and some preliminary experiments have been undertaken to explore possible explanations. Recent in vitro studies (unpublished studies) revealed that the exine shells exhibited gut mucosal adhesion properties. In addition, in vivo experiments on mouse microtone sections of intestinal walls of mice fed with exines showed the exines to lie between the gut villi. The unique morphology of exine shell surfaces probably evolved to help pollen particles to become attached to insects and thereby aid the process of pollination. It is possible therefore that this same morphology could help the exine’s adherence to and close association with the gut wall leading to an increase in the period of contact between the encapsulated drug and the biological surface, thereby enhancing its absorption and bioavailability.[Source 3]

Trace amounts of hepatotoxic pyrrolizidine alkaloids were found in pollen of Echium vulgare, E. plantagineum, Senecio jacobaea, S. ovatus, and Eupatorium cannabinum (Boppre et al., 2008). In Middle and Northern Europe these pollens are not among the main pollen grains gathered by bees, however in Southern Europe the two Echium plants are more diffused and are gathered by bees in larger amounts (Campos et al., 1994; Serra Bonvehi, 1997). [Source 1] (Page 5)

Therefore, it should undergo tests to approve it's purity as allergies can be caused.

6 : Biological and therapeutic properties of bee pollen: a review(NCBI)

Not the answer you're looking for? Browse other questions tagged reproduction digestion sexual-reproduction or ask your own question.

4
Is there a database of pollen-seed distances across plant species?
6
Why are mice with a single X chromosome and no Y chromosome males?
6
What happens to tube nucleus of the pollen tube after fertilisation?
2
Why are male gametes and female gametes not equally sized
7
Why does flatulence vary in temperature and smell?
1
Why isn't the ovum reabsorbed into the body (like sperms) if it is not fertilised?