Are there functional examples of parallel DNA double helices?

Note that although I only mention DNA above, papers discussing parallel RNA double helices in the same spirit would also be welcome.

Related question: why is DNA antiparallel? Can it be parallel?

Surprisingly, a parallel DNA duplex has been reported! In a paper, Tchurikov et al have reported the presence of parallel complementary DNA in the non-coding region of alcohol dehydrogenase gene as well as between two Drosophila DNA sequences. The region, which is ~40 bp long, has 76% bases in same polarity along with complementarity. However, its presence in vivo and its significance are not known (they observed its existwnce in vitro).

Tchurikov et al, in another paper, have reported that parallel complementary RNA in E. coli plays some role in RNA interference and is indeed more effective than antisense RNA in silencing mRNA for gene expression regulation. They also propose the presence of such a system in vivo in E. coli cells. (Seemingly, this paper alone is enough to answer your question since it fulfills all your criteria).

Many such papers, like Westhof et al, Mohammadi et al, etc. have reported the presence of parallel duplex DNA.

All articles I found discussing parallel helices are purely speculative with regards to biological significance; but, they are still interesting. Here are some that I found, in addition to the other answer.

As the great majority of eukaryotic messenger RNAs (mRNA) are tagged with 100 to 250 adenines at their 3′ end, the polymorphism of poly(rA) is also relevant for present day cellular processes involving mRNA translation, storage, and decay. Under conditions of cell stress, cellular mRNAs are transported into RNA granules, increasing the local concentration of poly(rA). It is possible that nature evolved proteins such as PABP in part to regulate the occurrence of poly(rA) duplexes in cells.

There are several reviews that discuss the possible role of parallel RNA in the RNA world which revolve around the problem of replication using complementary, anti-parallel strands:

Some mechanisms for replication in the RNA world have been put forward, and following the current systems of protein polynucleotide synthesis, all involve the creation of a complementary daughter strand using Watson–Crick base-pairing. But from a mechanistic viewpoint, such a model contains a fundamental problem: if a ribopolymerase were to make a complementary copy of itself, it would need to recopy this to obtain a new functional ribopolymerase. This implies that both the ribopolymerase sequence and its complement would have to coexist. But if these two copies came together, the result would be a double stranded Watson–Crick helix (as found in some RNA viruses) — not a new ribopolymerase. Even if both sequences had well determined secondary structures, the perfect complementarity of the Watson–Crick pairing would act as a sink, leading to a sterile population of double-stranded molecules.

The proposed solution is that early RNA polymerases may have created parallel complements to prevent such inhibition: 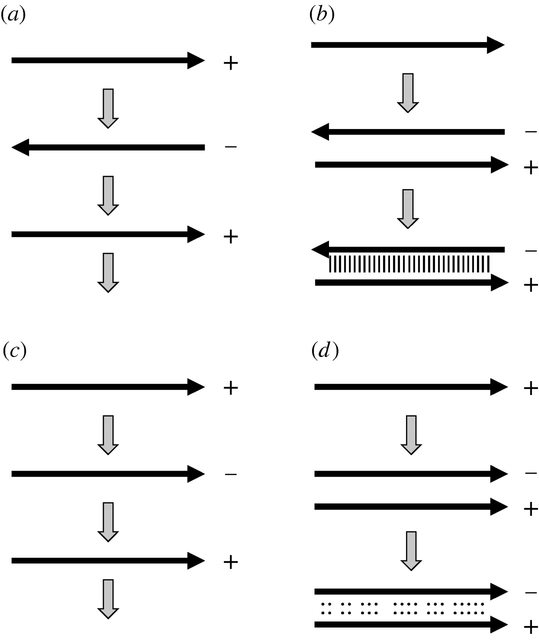 The propagation of information in a nucleic acid strand from one ‘generation’ to the next using Watson–Crick base pairing logically does not have to involve a reverse complementary strand. Providing that there is complementary base pairing, a parallel complement would also propagate the same information...

...all that need change from the viewpoint of replicase is the direction of its progression along the template. The resulting transcript could only be expected to base pair with the template over a short region before parting, but, faced with the problem of irreversible hybridization, this would be a desirable feature of the model.

This paper mentions some proposed functions of parallel stranded (ps) DNA, with accompanying references, but I can only access one of them:

Other functions have been proposed for ps-DNA in gene expression, recombination, RNA processing (14,18,20), the packing of single-stranded and dimeric viral genomes and the function of reverse gyrase (12).

This is the one reference that I could find from the above paper:

The possibility that ps-RNA might exist is intriguing in view of the rich structural and functional repertoire of RNA species in general. Three canonical situations in which ps helices could arise by interactions of wholly or partially homologous strands or looping of single stranded nucleic acid of appropriate sequence are shown in Fig. 12. The topological implications of such structures are of great interest, particularly in relation to the potential roles of ps-DNA and ps-RNA in (nonhomologous) recombination, RNA splicing, stabilization of ribosomal RNA, and other cellular processes. In addition, it can be anticipated that specific ligands, particularly proteins, could intervene in order to stabilize and exploit the parallel stranded conformation. 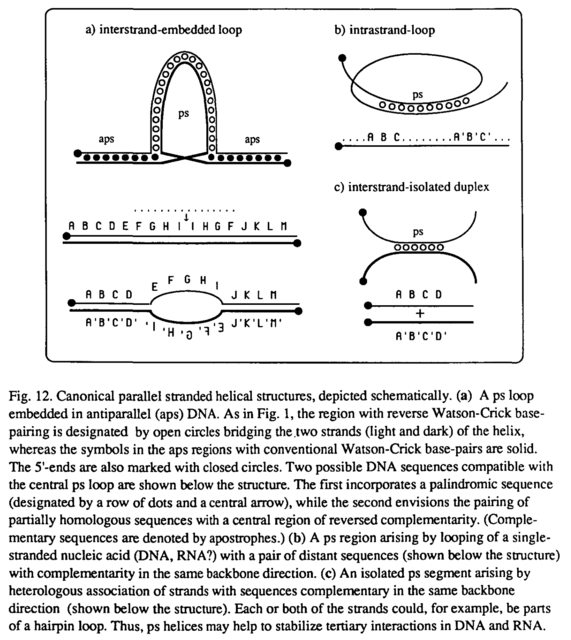 18
why is DNA antiparallel? Can it be parallel?
3
Parallel DNA double-helices with Watson–Crick base-pairing: Why do they not occur?