Cytoskeleton made of only actin?

I am aware that the cytoskeleton has three structural components: actin, microtubules and intermediate filaments. I was wondering if any cell could possess a cytoskeleton made only of actin. Or made only of microtubules, for that matter. Is it possible for actin to perform the functions that microtubules ordinarily perform in a cell? Or vice versa?

1) Can cells survive without any of the different cytoskeletal components?

Yes, most certainly. At least for actin and microtubules (MTs) there are plenty of eukaryotic cell types that can survive without them. MTs can be disrupted by cold-shock (see for example here https://www.ncbi.nlm.nih.gov/pubmed/16505977). How well the cell survives depends on the type of cell, but the ability to survive without MTs can range from minutes to hours as far as I'm aware. Once the temperature goes back to normal, the MTs just grow back. Of course, the cells won't behave normally in the meantime, because many processes do depend on MTs. Actin can be disrupted using various drugs or genetic constructs, or they can be cut using femtosecond lasers (see for example https://www.ncbi.nlm.nih.gov/pubmed/28324605). Again, many processes are disrupted, particularly cell motility, but most cells can survive without actin for a while.

I'm not aware whether any eukaryotic cells exist that have no intermediate filaments or can survive at least for some time without them.

2) Could a cell function normally while lacking one type of cytoskeletal component?

First, to my awareness there is no eukaryotic cell without MTs or actin. We do commonly use actin and tubulin promoters for transgenes and assume that all cells will express them. So I'm taking this question hypothetically.

As with every hypothetical question, the answer then purely depends on the restrictions that you define. Can the cell possess arbitrary new proteins that currently don't exist? Then yes, definitely you could get eukaryotic cells with just MTs or just actin or just intermediate filaments. You just have to bend all the other things the cell does to fit with that filament type, and then enjoy arguing whether that's still a eukaryotic cell or not.

But I think actin would find it easier to take over the other filaments' jobs compared to the other way round.

MTs are large and rigid. They can't operate on scales below 25nm like actin can, and the individual tubulin dimers can't do anything useful until a tube of some minimal length has been formed out of many dimers. Intermediate filament monomers are pretty thin, but very long. Actin monomers are small and globular, and a supershort actin filament made of a handful of monomers can already function as a filament, branch out, form networks, pull on things etc. Actin-mediated endocytosis crucially depends on this (https://www.ncbi.nlm.nih.gov/pubmed/25675087 for example). It would be difficult to find workarounds for these small-scale functions of actin if MTs or IFs were to replace it. On the other hand, actin filaments can very easily be made into large, thick, rigid rods like microtubules. Many cell types do this constantly when they form filopodia. Actin meshworks can also provide similar mechanical support (both stable and flexible) as IF meshes. With minor shifts in the regulation of where, when and how to organise filaments, actin could probably take over the other cytoskeletons' functions. It would probably require a quite sophisticated regulatory system though to perform all the different functions at the same time in one cell.

I think sperm is only having microtubules (axoneme) in them as a part of the cytoskeleton. Different types of cytoskeletons evolved to perform the different function so generally they will not exchange their function but are precisely evolved to carry out their individual functions.

(From textbook Molecular Biology of the Cell. 4th edition https://www.ncbi.nlm.nih.gov/books/NBK26914/)In tail section of sperm, which is a long flagellum.The core of the flagellum is composed of a structure called an axoneme.The axoneme consists of two central singlet microtubules surrounded by nine evenly spaced microtubule doublets. These dense fibers are stiff and noncontractile, and it is not known what role they have in the active bending of the flagellum, which is caused by the sliding of adjacent microtubule doublets past one another. Flagellar movement is driven by dynein motor proteins, which use the energy of ATP hydrolysis to slide the microtubules. 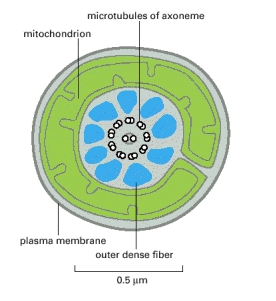 But I would like to correct my answer, as sperm also contains actin for capacitation and acrosomal reaction.So I think sperm is a eukaryotic cell where you can only see 2 types of the cytoskeleton.Here is the link for the paper https://www.ncbi.nlm.nih.gov/pubmed/15749953

5
Cell cycle selection
5
Breakdown of energy expenditure at the level of a single cell
5
Cytochalasin B in cell movement
4
Is there any disease in adult human, other-than cancer, which-is resulted from mutation?
1
Why eukaryotes have three different types of cytoskeleton filaments?
2
Plasma Membrane Proteins and Cytoskeletal Attachment
0
Why doesn't G-actin concentration fall once microfilament polymerization begins?