Do brain cells regenerate in the adult brain?

I know that most cells in the body regenerate, dying and being replaced with new cells. For example, in bone special enzymes move radially outward from the marrow in a narrow tunnel, destroying the old bone as they go and replacing it with new bone cells. In this way, our bones are slowly regrowing and being replaced constantly.

Is a similar process at work in the adult brain? Do neurons in the adult brain die and become replaced with new neurons? If so, how are the connections re-established? Each neuron is connected to other neurons by a complex network. If cells are regenerated, how do they re-connect to existing cells?

Short answer
Neural regeneration in the adult brain is confined to two localized hot spots, namely the hippocampus and the anterior lateral ventricular wall. Establishing connectivity between new cells and existing neurons is mediated, at least in part, by the growth cones present on axonal tips of newly formed cells. The growth cone responds to various stimuli and guides the axon towards it new target.

Background
As to your first question: Also adults can regenerate brain cells, albeit in a few restricted, specific regions of the brain. A continuous level of neural regeneration occurs throughout adult life in at least two locations. The first is the subgranular zone of the dentate gyrus of the hippocampus, the region of the brain involved in learning and memory. The other is located in and near the anterior lateral ventricular wall of the cerebral cortex. While neurogenesis in the adult hippocampus is relatively limited, the subventricular zone is thought to continuously replace interneurons in the olfactory bulb (Clarke, 2003).

Studies have shown that neurogenesis folloing neuronal cell loss due to injuries occurs only within the germinal structures mentined above, and not in cortical or striatal structures. Even when neurogenesis in the striatum (but not cortex) has been reported following ischemic injury, the resulting neurons survive only a short time. Hence, under normal circumstances structural or functional recovery in non-neurogenic brain regions is limited (Hallbergson, 2003).

Re-establishing connectivity between new cells and the existing tangle of neurons in the neurogenic regions of the brain is complicated. An important structure in this regard is the growth cone (Fig. 1); it is present in developing axons that are not yet synaptically connected. They are motile structures present on the tip of the growing axon and guide axons to their synaptic targets. They control the cytoskeleton and determine the course and rate of axonal outgrowth. Neurons and growth cones can detect a variety of external signals to establish neuronal migration and neurite outgrowth. A key in this process is chemotaxis. Several classes of molecules, e.g., secreted factors, adhesion molecules and cues from the surrounding extracellular matrix and adjacent cells are involved in the process of neuronal pathfinding and growth. To advance over larger distances however, gradients are insufficient and neurons use mechanical cues (durotaxis). For instance, neurite outgrowth has been shown to be affected by the mechanical stiffness of the substrate. Glial cells have been shown to be softer than their environemnt and neurons preferentially seem seek out glia to grow to (Lu et al (2006); Park (2002); Pawlizak (2009)). 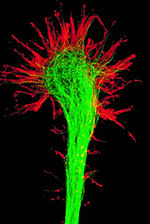 Fig. 1. Fluorescently labeled growth cone on the tip of an axon. source: wikipedia

Not the answer you're looking for? Browse other questions tagged brain neurophysiology growth regeneration or ask your own question.

6
Can children restore brain cells?
44
Can brain cells move?
2
Can mexican salamander regenerate any organ?
6
How does the brain recall information?
8
Why do neurons loose the potential to regenerate and reproduce in adult animals?
4
Do adult mammalian cochlear inner hair cells regenerate?