Where does moss come from?

I've been growing plants in pots for several years, and in some of my pots a patch of green moss appears and steadily grows to fill the whole surface area of the soil. But that doesn't happen in other pots. I've used different bags of soil for different types of plants, but moss doesn't seem to appear only in one type of soil from the same bag.

How does moss appear in the first place? Or is it present in all soil and only grows to a visible size under certain conditions?

Short answer
Moss plants form spores; minute, invisible, typically one-celled, reproductive units that are carried off by the wind and into your pots.

Background
Mosses belong to the Bryophytes. Bryophytes are embryophytes; i.e., non-vascular land plants. They are spore-producing, rather than seed-producing and they do not bear flowers.

The leafy moss plant you are describing is the sexual phase of the moss life cycle. When mature, most mosses develop sex organs. Under wet conditions, sperm cells are released from male sex organs (antheridia) and swim to the female organs (archegonia), attracted by a chemical released by the female organ. After fertilization, the egg cells that are embedded in the female organ form a spore-producing plant. This consists of a stalk with a spore capsule and stays attached to the parent moss plant. As the spore capsule matures, it releases its spores into the air, and then dies. If moss spores fall in a damp place, they germinate and grow into leafy moss plants, and the cycle is completed (Fig. 1).

Hence, to answer your question - moss appears in your pots when spores land into it and enough water is available for their outgrowth. 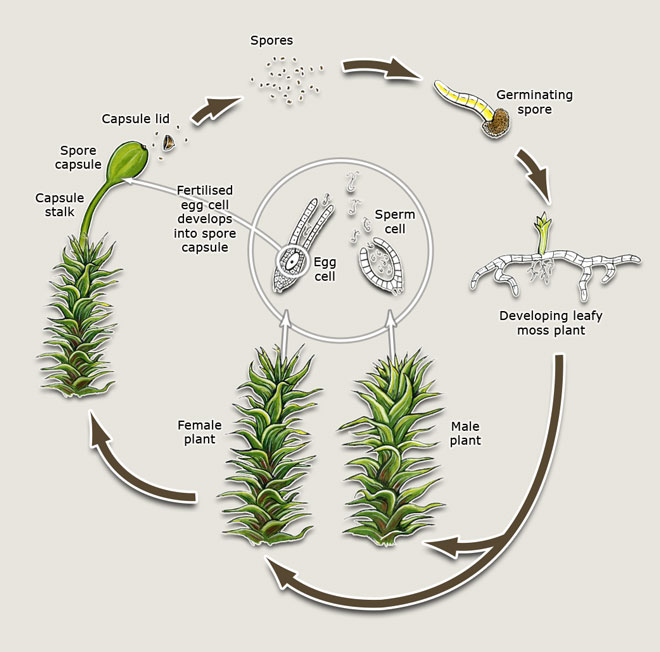