In general, the formation of a [chemical] bond releases energy

and continues to state,

Any help is appreciated.

Both statements are correct, but an understanding of why they are not contradictory requires a bit of explanation.

For "spontaneous" reactions, those which occur naturally, entropy must always increase. As a general rule, one of the easiest ways to increase entropy is to release energy, so we generally find that spontaneous reactions release energy.* It's a pretty decent rule of thumb to use.

In the case of an anabolic reaction, we're putting together complex molecules from simple ones, and for these particular reactions we see they don't release energy. They in fact "consume" energy in their formation. This is reasonable, so what we find is that such reactions are not "spontaneous." We don't see them just occurring on their own.

To make an anabolic reaction occur, we need to change the environment such that the reaction becomes spontaneous. We need to change the environment such that the reaction releases energy. To do that, we start off with inputs which have even more energy than the final product should (such as extra kinetic energy from heat, or a strong oxidizer to reduce one of the reagents, or any one of a number of chemical and mechanical approaches). Now the formation of the complex molecule can release energy, so it can occur spontaneously. When we do this, we release some energy, but not all of it. The rest of the energy is consumed in building the bonds of this molecule that would not otherwise have spontaneously come into being. The released energy is typically seen as waste, and the energy pent up in the molecule is your desired product.

So in the end, the reason why there's no conflict is the "In general..." bit in the first quote. You can cause a reaction to occur that consumes energy, but you typically have to do some clever things to put the energy into it. Reactions which release energy occur spontaneously. In general, we find "spontaneous" reactions occur far more often, hence the rule of thumb.

* I'm pretty loose with energy and entropy here to try to paint a simple picture without all of the confusion that entropy always brings to a discussion. As you learn more, do expect to need to be more precise than I am here.

Although the answer from @CortAmmon is generally admirable, I think there needs to be a distinction between the type of veracity of the two statements. I would say that:

Statement 1 (bond formation releases energy) is a fundamental truth which emerges from the definition of bond energy.

Statement 2 (anabolic reactions require energy) is a generalization that is true in most circumstances but is not a fundamental truth, as illustrated by exceptions.

The first problem is the definition of anabolism. Let us take an uncontraversial one from an internet site:

“Anabolism is… the generation of complex molecule from simple molecules”

or, as in Berg et al. Biochemistry, “Biosynthetic processes”.

It is immediately obvious that this is a much less precise concept than bond energy, and and the distinction arises between anabolism as a whole (e.g. the overall synthesis of glucose from pyruvate in gluconeogenesis) and individual anabolic reactions (e.g. the aldolase reaction in gluconeogenesis).

Now in anabolism in biology we are generally concerned with the the creation of complex molecules containing new carbon–carbon bonds, peptide bonds, glycosidic bonds, phospho-diester bonds and the like. As @CortAmmon makes clear, the second statement is valid because (I would say “if”) the bonds in the molecules that have to be broken for the likage to occur have a greater total bond energy than that of the new bond in the product. This depends on the particular chemistries involved, and may turn out to be true for the whole process, but there seems to be no fundamental reason why it should be so.

Certainly, it need not be true for individual anabolic reactions, as illustrated by the aldolase reaction, mentioned above: 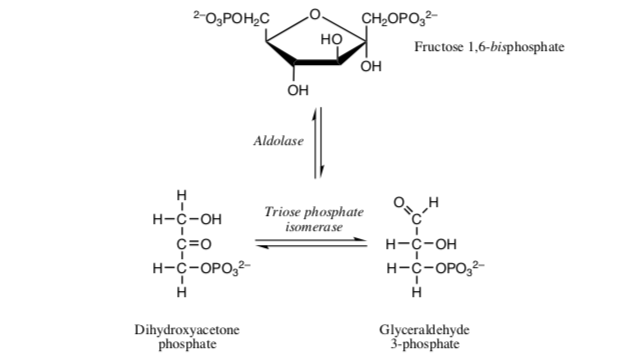 This is a reversible reaction, which in the anabolic direction forms a C–C bond between two trioses. The standard free energy change in this reaction is near zero.

If the poster’s textbook had made this distinction, the poster’s confusion on the matter need not have arisen.

I think both statements are correct.When they consider the entlapy change they consider the overall change. Energy is needed for the reaction to start for breaking old bonds allowing new bonds to form hence on the other hand when bond forms energy is released. The energy released is more as compared to energy absorbed hence bond formation releases energy.

Not the answer you're looking for? Browse other questions tagged biochemistry energy-metabolism or ask your own question.

25
What is a coupled reaction and why do cells couple reactions?
4
Is it a valid generalization that kinases catalyse reactions involving energy transfer and utilization?
2
Catabolic and Anabolic Reactions
3
Why is ATP hydrolysis to ADP, rather than ADP hydrolysis to AMP, used to drive biochemical reactions?
2
What determines whether a reaction using ATP produces ADP or AMP?
6
Pyruvate dehydrogenase: Apparently anomalous NAD/FAD redox reaction
3
Besides fats, proteins, and carbs, what compounds can the body use for energy?