Spruce growing high up in a maple trunk: Can a partially rotted trunk completely sustain another tree?

Ask Question
Asked 4 years, 7 months ago
Active 4 years, 4 months ago
Viewed 268 times
15
$\begingroup$
Want to improve this post? Add citations from reputable sources by editing the post. Posts with unsourced content may be edited or deleted.

I've come across a spruce tree that is growing 15ft up in the crotch of a sugar maple tree: 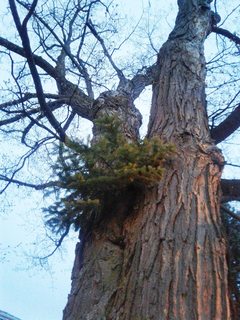 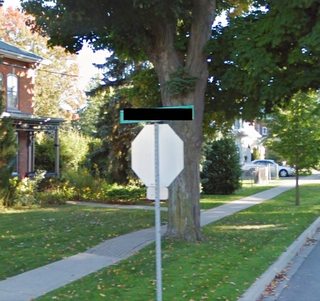 According to Google StreetView, the spruce has been there since before 2007 (over 10 years ago!).

I've seen other trees growing out of rotted stumps or in trunks near ground level before, but I've always just assumed that the roots of those trees reached down to soil -- in one way or another -- to get the nutrients they need for survival.

But with the subject tree, it's so high up that I would assume that that the roots do not have access to any soil. It's my guess that the spruce is getting all of its nutrients from decomposed wood in some rotten portion of the trunk.

I didn't know biology worked like this. I wouldn't have guessed that a live, partially decomposed trunk could contain 100% of the nutrients that a tree needs to survive for 10+ years. I know soil is made, in part, from decomposed wood, but it's my understanding that there are a lot more ingredients too.

Can the decomposed wood in a partially rotted trunk completely sustain a tree?

Note This answer makes the presumption that the crotch in the maple's trunk is indeed a breach through its bark, and does reach the inner woody tissues.

The heartwood of most trees consists of the dead connective tissues, xylem, which surrounded the cells that once formed the living layer of phloem under the protective bark. That connective tissue itself mostly cellulose, and is a polymeric chain of glucose i.e. sugar molecules bonded and linked in such a way as to make them indigestible to most lifeforms.
Certain bacteria and fungi, among others, are able to do so, and they are among the first responders in the decomposition scene. When these microbes, often present in the gut of various insects, are able to break down the woody fibers into forms that permit their re-use by other plants, the detritus is comprised mostly of carbohydrates, alcohols, carbonic acid, and water. Phosphates and various other trace elements which were present in the cells of the woody tissues are released also.
Later, visiting birds and mosses will further augment the ecosystem, adding nitrates and various salts — potassium, sodium, chlorides, and the like.

Another thing that needs to be considered is the drainage. Where does the excess water go? Pressure on the capillaries inside the xylem of the maple should be able to channel some water downwards, but not much will exit through the roots. I've never heard of such a thing. The hole in the maple will widen and exacerbate, deepening the rotted area, but it will be acidic and somewhat saline due to the lack of drainage.

Can it completely sustain another tree? As the ecosystem flourishes, probably; unless the new tree has special requirements for the pH or salinity of its soil which are not maintained by the rotten wood, then it should be able to gain enough nutrition in the form of nitrates, phosphates, and water, but not all of that will come from the other tree directly.

The branches of a tree will only grow so large as can be sustained by their root system, of course. The limited space in which this little sapling has taken root will result in the less than maximal form that you see in the photographs.

So, in conclusion, that spruce will probably not thrive by any means, but it will manage to survive. Spruces do favor more acidic soils — lower pH — than many other trees, so it has that going in its favor.
That much is obvious, I suppose: ten years, and it no larger than a four–year shrub.

There is a problem if all this occurs inside a tree which has not fallen, however. Usually, the outer bark of a tree protects it from such decompositional actions, because the inner woody tissues of most trees do not contain adequate chemicals to deter insects and fungi from chomping or ‘mycelizing’ their way through the heartwood.
Eventually, the maple will either need to be cut down or will be weakened enough that it will collapse.

Well, holes in rotting trees are not only going to contain rotten tree matter (aka compost :p), but they will also slowly gather fallen leaves, dead insects, dirt, dust and other debris. Even minuscule layers of these substances will essentially form a pile of "soil" with nutrients and minerals needed by the tree.

So it's not unheard of for plant to survive in these conditions.

Plants that grow (harmlessly) on other plants are called Epiphytes, and they derive moisture and nutrients from the air, rain and debris accumulating around them. 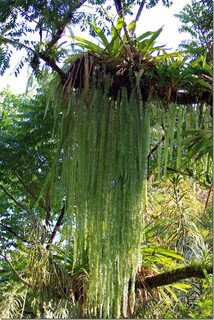 It is true that many tropical epiphytes have modified biologies/anatomies to capture and mineralize nutrients from air and rain water (Yoon Lee, n.d.), but some epiphytic species do develop roots to take advantage of soil/debris/decomposed materials that have accumulated. (Cardelus & Mack, 2010)

In the Hoh Rainforest in Olympic National park, there are many "nurse trees" and "nurse logs"; the latter are trees that have fallen and now act as a nutrient source for smaller trees growing on them. 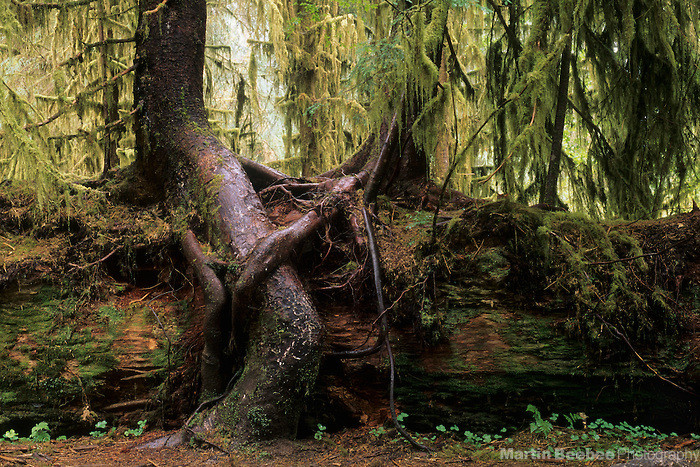 Some of the larger trees' roots find their way into the soil, which facilitates their growth, but some smaller trees do not.

...but it's my understanding that there are a lot more ingredients too.

I would not say 'a lot', but rather 'some', mostly water. The log provides most of the nutrients the new tree needs, the rest being supplied by rain, fungi, mosses, leaf litter, etc.

Not the answer you're looking for? Browse other questions tagged botany nutrition trees soil symbiosis or ask your own question.

8
Why do some trees in California have dead brown leaves but also new green leaves?
3
epiphyte mats in tropical forests
10
What kind of tree is this — why do its huge leaves change shape and "grow fingers"?
3
Identification of a young tree in the alpine region of southeastern France
6
Why are plants unable to take up Phosphorus directly in their organic form like Phytic Acid?
6
Branch taking over a tree trunk
4
Is it unusual for populations of archaea to be found living inside trees?
7
What is the fate of the typical tree?