How does alum help in blood coagulation?

I recently came across a test in my chemistry book which says that potash alum, $\ce{K_2SO_4.Al_2(SO_4)_3.24H_2O}$ is used on cuts and bruises, because it coagulates the blood quickly. The explanation it gave, was that blood is a colloid of proteins in water and the $\ce{K^+}$, $\ce{Al^{3+}}$ and the $\ce{SO_4^{2-}}$ ions coagulate(=precipitate) them, causing a blood clot (quickly). However, from biology, I know that blood coagulation(=clotting) is brought about by formation of fibrin network which traps the WBC and RBC in blood. The formation of fibrin from fibrinogen involves a series of reactions with many factors like $\ce{Ca^{2+}}$ , but not $\ce{K^+}$ or $\ce{Al^{3+}}$.

So, I was wondering what the actual explanation might be.

Note: This is a question involving both chemistry and biology, but I posted the question here as I thought that this is more of biology than chemistry.

I will answer the three questions one at a time. Lets begin with the first one:

Yes, alum is also used as a disinfectant, and it works in the same way as it does in blood coagulation. In aqueous solution, potash alum dissociates as:

Now, as is known, blood is a colloidal solution, in which the plasma proteins are charged (see Rügheimer et al, 2008). These ions from alum neutralize the charges on plasma proteins, causing the blood to coagulate. Similar effect is observed in disinfectant where these ions react with the free organic acid and thiol groups of proteins on microbes and free proteins, resulting in their precipitation (Williams, 2001). Thus alum can act as disinfectant.

Coagulation of both plasma proteins and RBCs takes place on application of alum, since both of them are charged (Fernandes et al, 2011) as is discussed in next point. However, it is difficult to say whether coagulation of plasma proteins plays a significant role in clot formation or not.

Yes, alum does contribute in the process of clotting: it makes clotting faster. Although the term 'clotting' is generally used for formation of what is called as platelet plug, the actual process of clotting also depends on coagulation of colloidal particles in blood. When the blood is exposed to the extracellular matrix (due to damage to blood vessel), platelets activate and, via a cascade of reactions, lead to formation of a platelet plug. Red Blood Cells get tapped in this plug (which is actually a fibrin meshwork) and lead to formation of clot. A nice and simple representation of this process is below (from here): 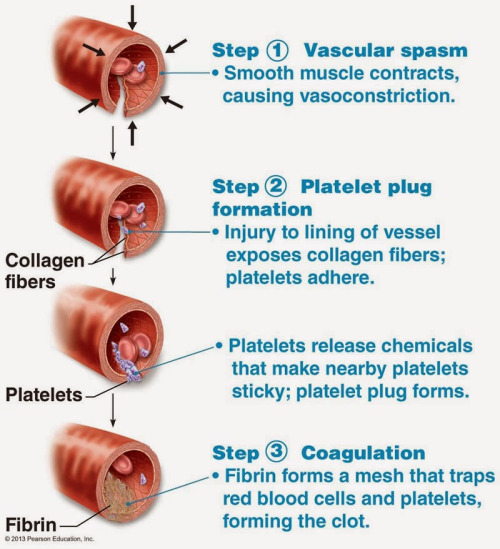 Without alum, RBCs would take longer to coagulate due to mutual repulsion. By neutralizing them, alum makes this process easier and faster. Hence, alum helps in the formation of blood clot via coagulation of red blood cells.

Not the answer you're looking for? Browse other questions tagged biochemistry blood-circulation or ask your own question.

4
Blood circulation - How to expand blood capillaries?
1
"Blood circulation". Why blood bleeds in atmosphere ?
1
How does vasodilation slow blood flow?
1
Does blood carry metallic nanoparticles?
8
How does blood reach skin cells and other closely packed cells?
2
Where is coagulation factor v produced?