Why does Edema occur in Kwashiorkor?

Edema in lower leg and face is a symptom of Kwashiorkor. It is the most distinguishing feature of it which distinguishes it from Marasmus. Why would decrease in amount of proteins cause Edema? Why doesn't it occur in Marasmus (which is both protein and energy deficiency)?

Why would decrease in amount of proteins cause Edema? 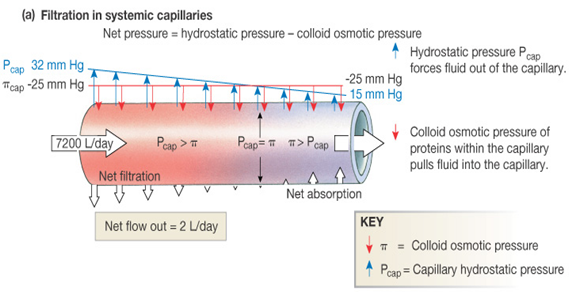 If you lower the amount of proteins in the blood drastically (as in Kwashiorkor) the oncotic pressure is lower and therefore less fluid is reabsorbed from the tissue, which leads to its accumulation there - this results in edema.

Why doesn't it occur in Marasmus (which is both protein and energy deficiency)?

Sometimes, both features of kwashiorkor and marasmus are present in the patient, which is called marasmic kwashiorkor and the distinction between these two conditions isn't that easy.

Oedema in malnutrition(kwashiorkor) is due to extra cellular imbalnce of the fluids which is caused by lower albumin level. Where some can see protruded stomach due to enlargement of liver this is caused by imbalance in gastro intestinal system hence causing gut and liver to swell hence diognosed as oedema.

Not the answer you're looking for? Browse other questions tagged physiology proteins human-physiology or ask your own question.

9
How does Yeast-two-hybrid detect interactions between several proteins in one experiment?
2
Kinetics and de novo protein prediction
6
Thermodynamics of spontaneous protein folding: role of enthalpy changes
8
Why do fully grown organisms need protein intake?
1
Glucose Carrier Proteins in Cell Membranes
8
Why does eating saturated fat increase blood cholesterol?
2
Why does damage to myelin sheath in multiple sclerosis lead to a decrease in information reaching the brain from sensory receptors?