What am I looking at in Franklin's Photo 51 of DNA?

Here's Rosalind Franklin's famous Photo 51, the X-ray diffraction image of DNA from which Watson and Crick deduced its structure: 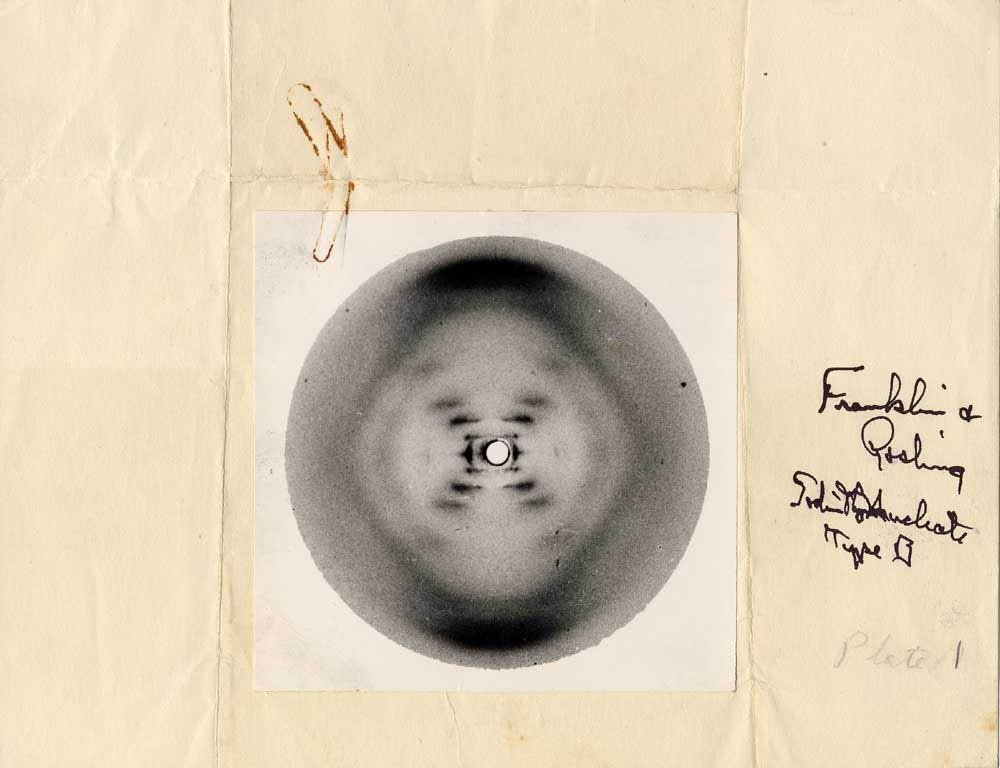 My understanding is that it depicts a short segment of DNA shown from the side (so the axis that the strands wind around would run up and down through the center of the photo). Like this double-helix diagram from Watson and Crick's paper: 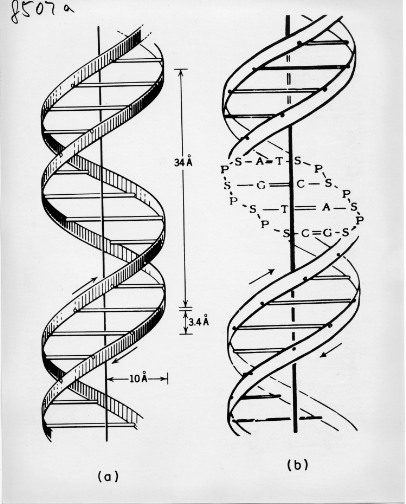 I have a lot of trouble connecting the photo to the diagram.

What am I actually seeing in the photo? There are dark blobs at the top and bottom. A diamond shape of dark lines. A concentric circle (or rounded diamond) inside the outer diamond. An X formed from two intersecting rows of 7ish mostly horizontal short lines or blobs. Which of these features correspond to what parts of the DNA molecule?

...have a lot of trouble connecting the photo to the diagram.

And that's quite excusable: interpreting that X-ray image is actually very complicated .

All the quotes and images in this answer, except the bulleted list further down, come from this paper (Lucas, 2008), which explains that historic picture in details.

Full disclosure: I always though that that image depicted the X-ray going longitudinally (that is, along the main axis) through the DNA. However, it goes transversely:

When filamentous macromolecules are packed in a fibre along a fixed direction, the X-ray intensities diffracted by the fibre fall on the observation screen along approximately straight and equidistant lines, the so-called layer lines, perpendicular to that direction. This important concept was introduced by Michael Polanyi in 1921 for the X-ray study of cellulose. (emphasis mine)

These are the so called layer lines (I'm keeping the original paper's legend in all images): 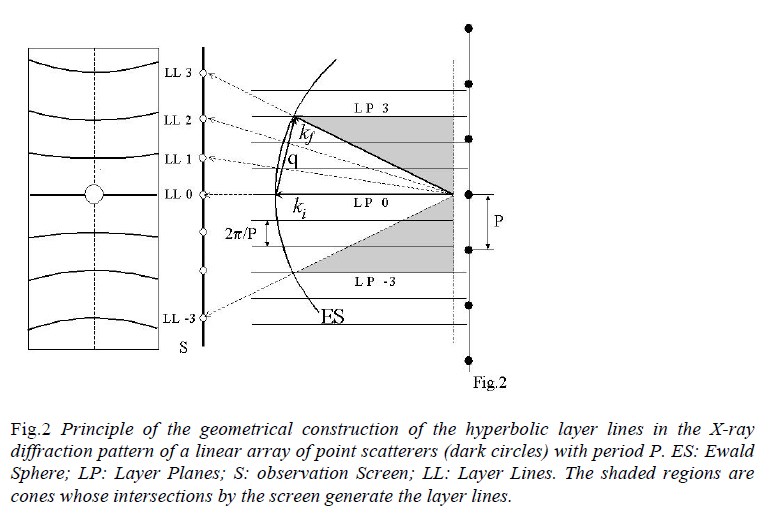 Then, still according to the paper, Crick and others started to hypothesise how would be the X-ray diffraction in a monoatomic helix:

In 1952, Cochran, Crick and Vand developed an analytical theory for X-ray diffraction by a monoatomic helix. The immediate interest of their theory was to give a transparent, analytical expression of these amplitudes at a time, in 1952, when computers, if at all available, were barely capable of a brute force calculation of the total diffraction intensity.

This is the X-ray diffraction pattern in a monoatomic helix, which is quite important to understand the famous DNA diffraction image later on: 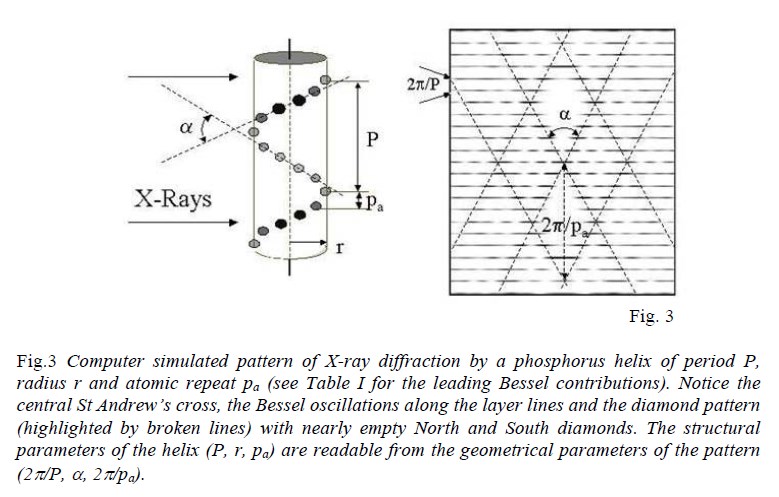 Thus, with that theoretical background, we can understand our famous image: 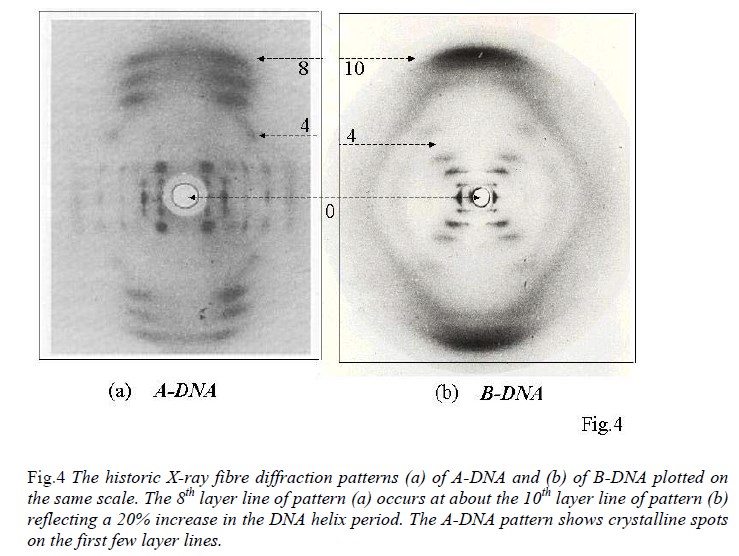 In this image, a X-ray diffraction image of A-DNA (left) and the more common B-DNA (right) show a periodic pattern in the layer lines.

The diffraction patterns can be interpreted as follows (source):

Finally, this is an image better relating the double strand structure of the DNA (both A and B DNAs) with the X-ray diffraction image: 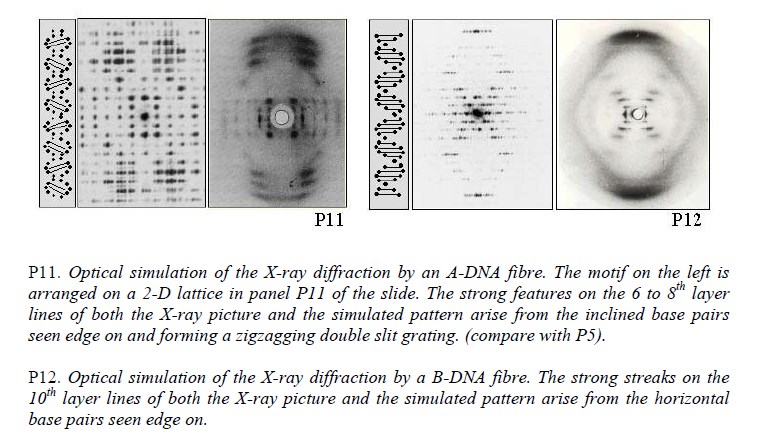 Not the answer you're looking for? Browse other questions tagged dna history imaging or ask your own question.

2
What would it take to recognize a deer by its photo?
7
Looking for a DNA sequence
0
How do people actually find codons in a DNA transcript just by looking at it?
5
What did Francis Crick and James Watson discover that Rosalind Franklin didn't?
0
What is the most detailed living-tissue scan available