Enzyme kinetics; what happens at the peak of the Gibbs energy graph? 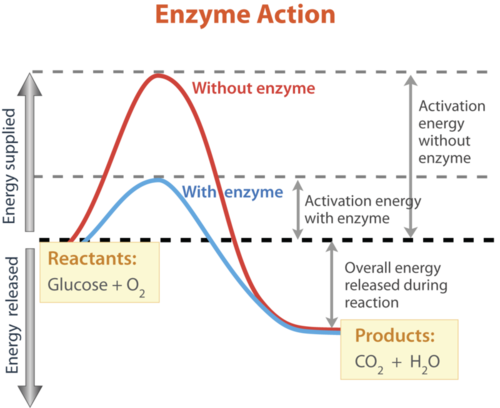 At the very peak, the energy is in a state of activation energy. Here, is the substrate just attaching to the enzyme, or is is substrate already breaking?

Enzymes are catalysts that lower a reactions activation energy (Ea), and thus increases the rate of the reaction. The diagram above is a Gibbs-Free energy landscape/pathway, where the top of the diagram is the transition state between the substrate and the product. Enzymes speed up chemical reactions by stabilising the transition state, and in effect, lowers the activation energy (Ea) required to transform the substrate into the product. The active site of enzymes are thus specifically 'designed' to be as energetically favourable as possible for the transition state. 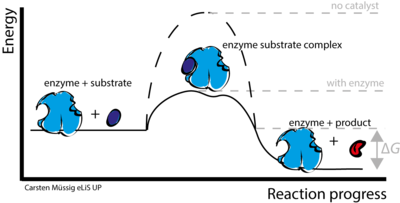 To understand enzyme kinetics it could also be a good idea to look at (understand on a general level) the Arrhenius equation and reaction rate constants (k), to more completely understand what we mean by activation energy and reactions rate.

This whole topic is taught in basic biochemistry, and thus well described by many educational websites, all biochemistry text books, and even found in educational youtube lectures (which is perfect for a basic understanding before you read more heavy theory). My earlier biology SE question Enzyme kinetics: recommended literature to grasp the concepts better also has some good book recommendations.

Following are also some webpages you can look at.

With the catalyst, the activation energy is lower than without. ... That's because enzymes don't affect the free energy of the reactants or products. Instead, enzymes lower the energy of the transition state, an unstable state that products must pass through in order to become reactant (...)

Linus Pauling postulated long ago that the only thing that a catalyst must do is bind the transition state more tightly than the substrate. That this must be the case can be seen from the diagram (...)

Wikipedia: It could also be a good idea to generally read about catalysts, here from the wikipedia page where they use the classical example chymotrypsin and its oxyanion hole (active site that binds the substrate) that contains the Asp-His-Ser catalytic triad:

In the presence of chymotrypsin, (...), a nucleophile is used in the form of the catalytic triad - Asp 102, His 57, Ser 195 side chains. Moreover, the oxyanion hole, which consists of the backbone -NH- groups of Gly 193 and Ser 195 of the enzyme, have the N-H groups positioned in such a way that they will donate strong hydrogen bonds to the substrate's C=O oxygen, given that the carbon atom is tetrahedral as found in the transition state. This strains the bonds of the trigonal planar C=O of the original substrate, helping the reaction to proceed to the transition state. The hydrogen bonds also stabilize the formal negative charge on the oxygen atoms. In this way, the activation energy of the reaction is lowered and the rate of reaction thus increases.

Not the answer you're looking for? Browse other questions tagged biochemistry proteins enzymes enzyme-kinetics or ask your own question.

4
What does "kcal/mol" mean when speaking of enzyme catalysis?
2
What does "thermodynamic equilibrium" mean for an enzyme-substrate complex?
3
What is a detailed chemical explanation for describing how an enzyme may lower the activation energy of a reaction?
1
Why is the formation of an enzyme-substrate complex endergonic (induced fit model)?
2
Enzyme kinetics types?
2
Gibbs free energy and entropy in enzyme catalysis
4
Enzyme kinetics at the chemical level
0
How do enzymes not change the overall energy change of the reaction they're catalysing if they lower the activation energy?
0
Why such strange enzyme kinetics?