The Citizen-based mosquito monitoring system is a Citizen-Science vector tracking project that involves using any of a wide variety of cell phones to capture "sound bites" (sorry!) of mosquitos. These are collected and analyzed in order to gain some insight into the distribution of different species of mosquitos at different times and locations. Attention is paid to ensure the system works with older model phones that are distributed more widely.

While a positive identification of a single insect form a single recording is not likely this way, over time a statistical analysis is expected to give meaningful information. I believe the idea is that similar sounding species are expected to not be in similar places at similar times so often that it muddles the identification too much. This is citizen-science; imperfection is not a deal-breaker.

I was happy to see that there is a BioRvix paper. In fact, I was surprised to see there is such at thing as BioRvix in the first place!

I think there is a lot of information densely packed within the figures, and I'd like to understand more of it. In the second figure below, which is Figure 7 in the paper, what does the color scale and color coding represent?

There seems to be some suggestion of time of day as well, but I don't understand exactly how. What about time of year - that should also play a major role.

Some may recognize Manu Prakash as "Foldscope guy". 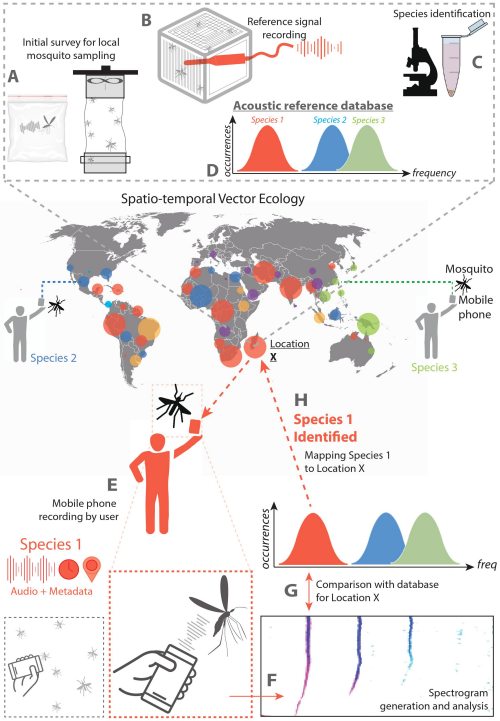 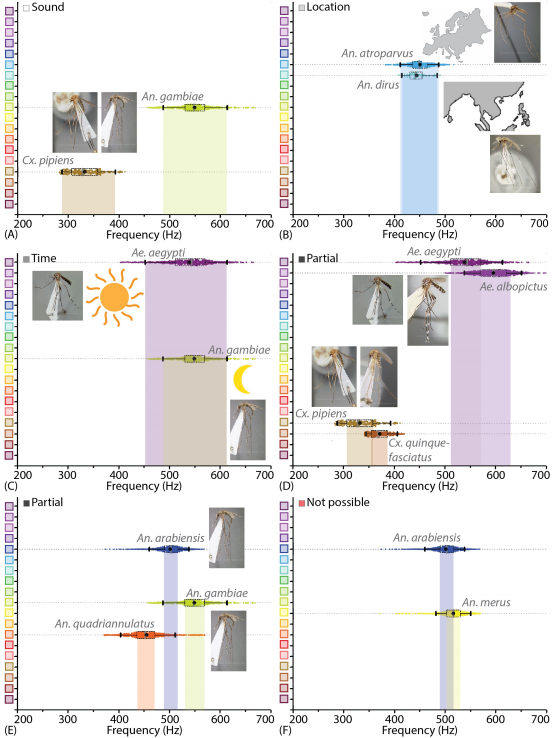 In the second figure – What does the color scale and color coding represent?

Each color is an individual mosquito species, arranged the same from top to bottom on all plots. Here, on the left, all species are gathered on one plot, with the y-axis now labeled “Species.” 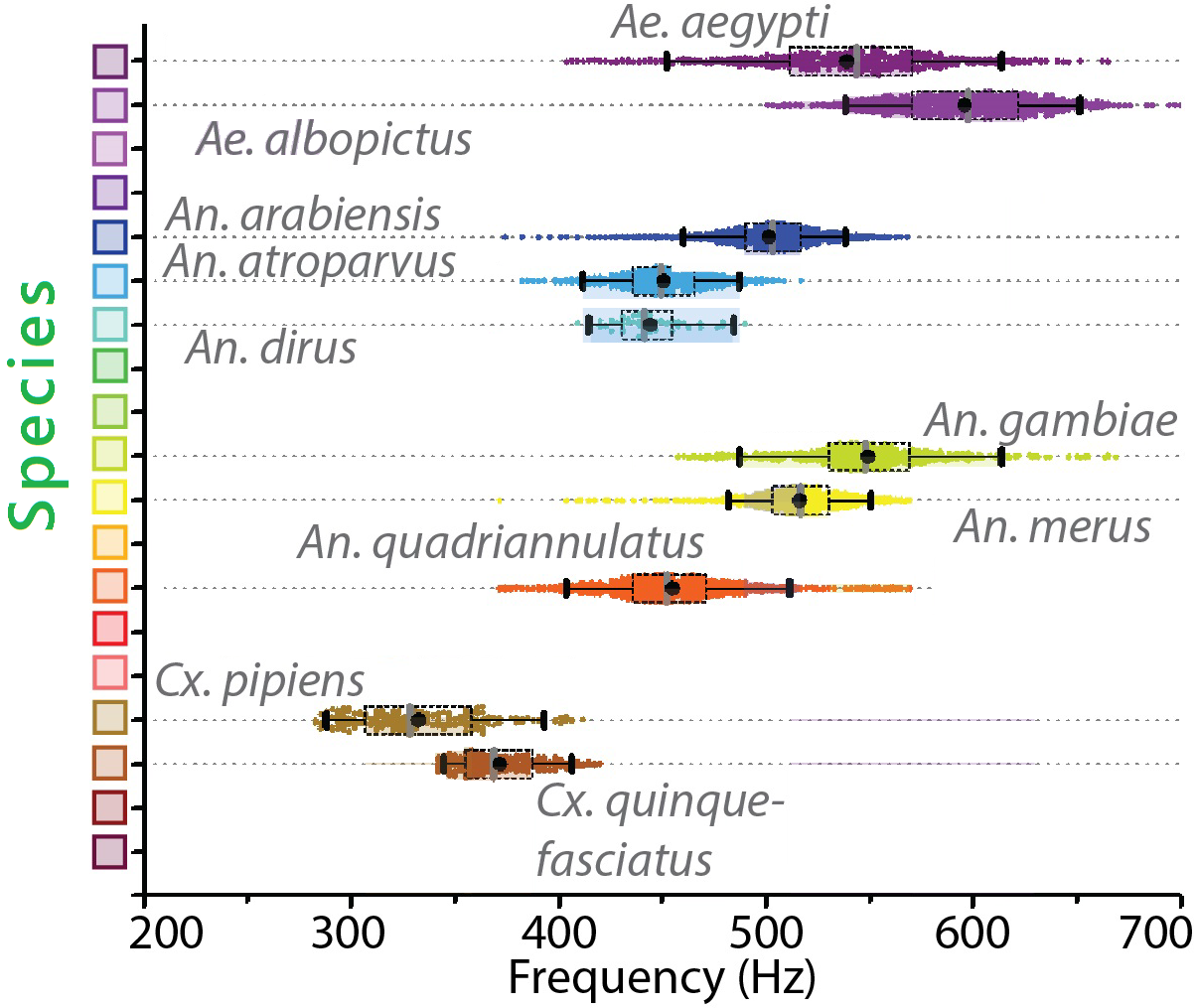 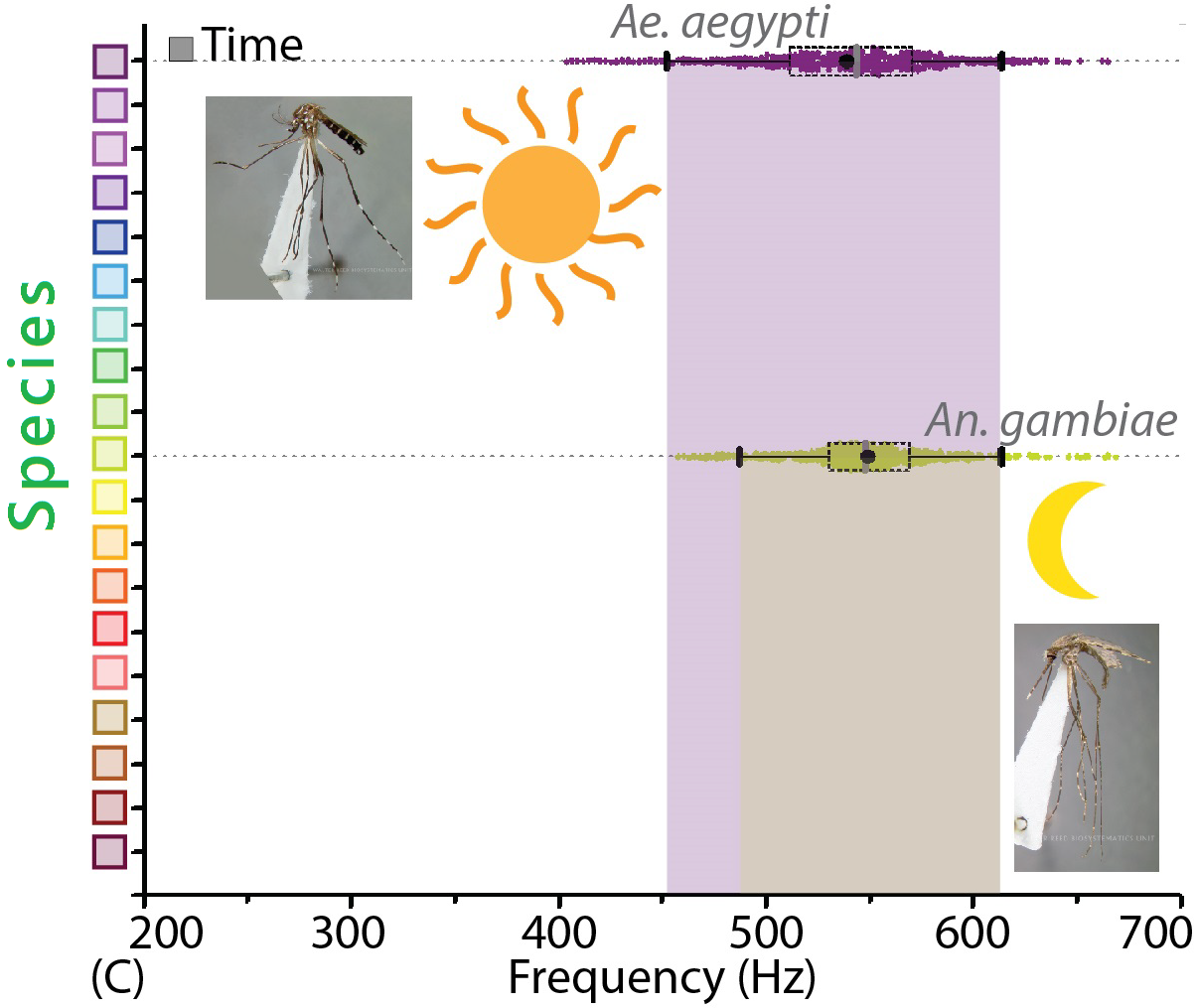 The sounds of many mosquitoes apparently have statistical profiles similar to each other, so the individual plots demonstrate how additional factors help distinguish species in some such cases.

In the plot for “Time” (C), the sun and moon merely accompany the species whose differing circadian habits they illustrate. It is only a coincidence that the daytime species is plotted higher.

Just to complete the picture, here is how these plots mark statistical profiles.

Not the answer you're looking for? Browse other questions tagged entomology statistics data infectious-diseases or ask your own question.

8
What is this insect that has invaded my home in Texas?
27
What is this droplet of liquid that comes out of a mosquito?
7
Experimental Analysis: What are possible reasons for this increase in N₂O production?
6
What is this giant mosquito-like insect?
7
Beautiful blue enigmatic insect (mantid?) in Kenya