Should there be separate Ramachandran plots for an amino acid in different contexts?

I understand the nomenclature of the phi and the psi angles of the alpha-Carbon atoms in protein stucture, but I am confused by the Ramachandran plot. Each alpha-Carbon atom (magenta) makes two peptide linkages and has two corresponding neighbouring alpha-Carbons (cyan) and side-chains. I would expect the psi and phi values to depend on the interactions of these side-chains, so I would expect that for a single amino acid one would need a separate graph for every possible combination of neighbouring amino acids. 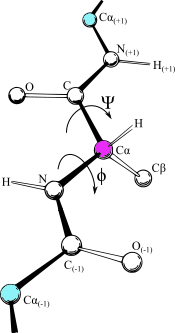 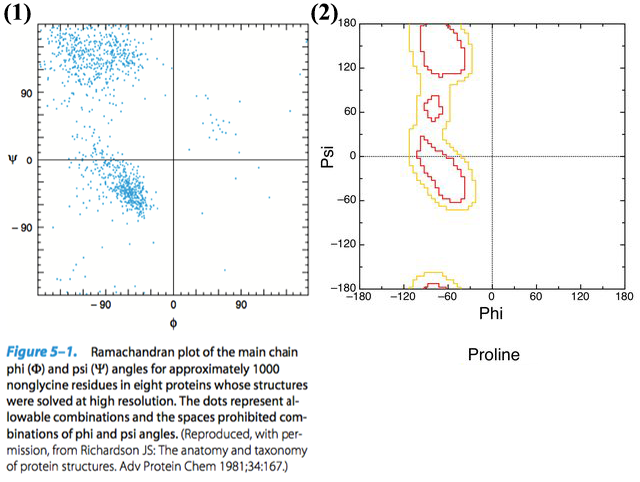 I have also seen plots for specific amino acid and their allowed angles, such as that for proline (2), above. This suggests that the neighbours are not being taken into account. If this is so, why not?

The phi and psi dihedrals describe the dihedral on both sides of the c-alpha of a single amino acid, and do not involve any angles of the neighboring amino acid.

The Ramachandran plot is something generated from a set of protein structures, an empirical data set. The top graph represents the dihedrals found for all non-glycine residues in a set of structures. You can filter this for proline only, and you'd get the bottom graph. The top cloud of dihedrals represents those found in beta-sheets, and the bottom cloud those for alpha-helices. Sequence (the amino acid before or after) doesn't really matter that much for what's allowed (although we cannot directly deduce this from the data in those graphs).

If you look a little bit more into the structure of helices and sheets you'll also find out why that's the case. In beta sheets the sidechain of the +1 residue is pointing completely the other way, and also in helices there's little interaction between the sidechains of subsequent residues. Secondary structures are built using the amides, not with the sidechains.

Some further observations about Ramachandran plots in response to the question: 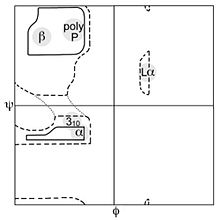 Not the answer you're looking for? Browse other questions tagged biochemistry proteins biophysics protein-structure or ask your own question.

1
Can the knowledge about torsion angles alone be sufficient for specifying secondary structures of protein?

18
What is the significance and method behind Ramachandran plots?
7
How to compute properties of peptides ?
3
Protein Structure Parameters
1
Is there a notion of RMSD for two different molecules?
3
Bimodal frequency distribution of size of protein loops
0
Why are Ramachandran angles of first and the last amino acid not necessary to define the full 3D structure of a protein chain?