How does repair take place on leading strand in eukaryotes?

I am currently reading molecular biology of the gene by Watson to develop an understanding of the mechanism of replication and repair. Under the topic mismatch repair of DNA, they mentioned that eukaryotes lack a homolog of MutH. The repair takes place from the nicks developed on the lagging strand before ligase acts on Okazaki fragments. How then does the repair take place on the leading strand as there are no nicks on the leading strand? And also, because eukaryotes lack Dam Methylase, how does the repair system recognize which nucleotide of the mismatched pair is incorrect?

I'll keep the answer to this as concise as possible. The major mismatch repair (MMR) pathway used by eukaryotes is the MutS$\alpha$-MutL$\alpha$-dependent MMR. See the diagram below for its mechanism: 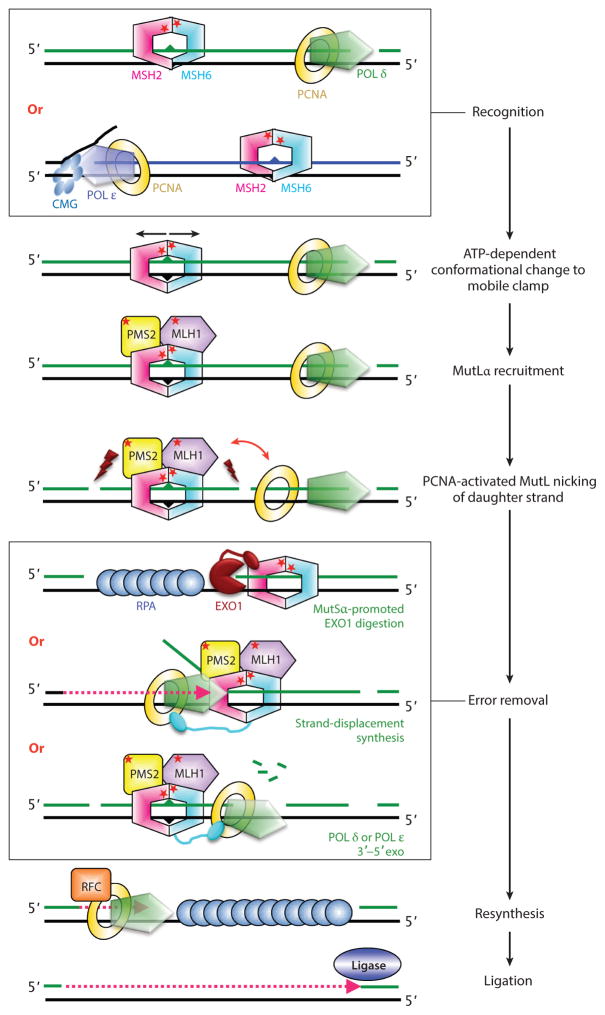 The pathway initiates when MutS$\alpha$ (Msh2–Msh6) binds to a mismatch. This is followed by binding of MutL$\alpha$ (Mlh1 and Pms2). PCNA then activates MutL$\alpha$ to incise the nascent strand and the DNA ends are used for removing the replication error. After this, the repair is completed by correct DNA synthesis and ligation (note that this pathway works in both leading and lagging strands). DNA replication and MMR are temporally coupled in a manner that may be related to the regulation or appearance of the signals used for MMR. Also, pay attention to the point that the opposite strand is used as reference strand for repair and the strand to which MutL$\alpha$ binds is the one at which Pol$\epsilon$ (or Pol$\delta$) replicates as the DNA polymerase and the PCNA act as the signal for MutL$\alpha$ activity.

See this paper (also the image source) by Kunkel and Erie (2015), they describe this process and a lot of things related to it, including its regulation and signals, in much more detail. I haven't talked much about the details here as the paper is a much better source to understand them.

7
In DNA repair, how is it determined which strand contains the error?
11
Difference in length of Okazaki fragments
3
Does DNA polymerase I require a $3^\prime$ end?
10
Does depolymerisation take place at the minus end of microtubule?
1
Where do transamination and deamination take place?
3
Why does crossing over take place at all?
0
Why do mutations not take place in mRNA of higher eukaryotes?
3
Does DNA ligase have any role to play in replication on leading strand?