I know that white colour is perceived on excitation of red, blue and green cones simultaneously.

It is also said that a colour blind person doesn't see a particular colour and just perceives it as a shade of grey.

If their (for example all red) cones are affected, then how do they perceive white colour?

Clarification: Will a person with defect in red cones perceive white colour when green and blue colour only fall on his retina?

So, basically he will detect RBG and BG both as white.

If not then how will he be able to differentiate?

No not white or grey generally, it's a mix of other colors, they often have low resolution of a particular color.

Here's a page where you can mouse over a color wheel and see a version in color blind mode: http://www.archimedes-lab.org/colorblindnesstest.html 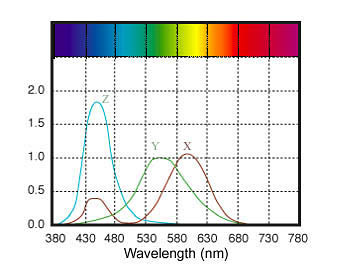 The first type of cone is primarily sensitive to short wavelengths (blue), another to medium wavelengths (green) and one to long wavelengths (yellow). The yellow cone is usually referred to as the red cone. While its sensitivity peak lies in the yellow wavelength band, it is also quite sensitive to red. A single cone cannot detect color, as it provides only a scalar number indicating the total light energy it absorbs. For example, the red cone by itself cannot distinguish red from yellow, green or orange. Red is detected by a combination of high activation of the red cone, low activation of the green cone and no activation of the blue cone. This page has a very comprehensive graphs and a first hand account of Tritanomaly

Evolutionary gene mechanisms have a particular knack of varying vitally important organs and functions, arm length, walking gait, hair type, color, and colorblindness is perhaps an expression of high variance to a survival critical and modular organ which animals have a high variance in depending on their habitat and survival requirements.

Not the answer you're looking for? Browse other questions tagged physiology pathology vision human-eye or ask your own question.

8
Do blind people learn Braille equally fast as the sighted?
6
Why don't myopic people see the world upside-down?
9
Can people with paralyzed eye muscles see?
24
Why do I see different hues of colors between each of my eyes?
5
Can a color-blind person see color with filter glasses?
6
What do blue cone cells add to visual function?
5
Do Colorblind People Have Stronger Sensitivity in Their Other Remaining Cones?
2
Is chromatic aberration related to the spectral sensitivity of the human eye and can it cause "relative myopia" and "relative farsightedness"?