Why are amino acids in biology homochiral?

Why are nearly all amino acids in organisms left-handed (exception is glycine which has no isomer) when abiotic samples typical have an even mix of left- and right-handed molecules?

I know that you are referring to the commonly ribosome-translated L-proteins, but I can't help but add that there are some peptides, called nonribosomal peptides, which are not dependent on the mRNA and can incorporate D-amino acids. They have very important pharmaceutical properties. I recommend this (1) review article if you are interested in the subject. It is also worth mentioning that D-alanine and D-glutamine are incorporated into the peptidoglycane of bacteria.

I read several papers (2, 3, 4) that discuss the problem of chirality but all of them conclude that there is no apparent reason why we live in the L-world. The L-amino acids should not have chemical advantages over the D-amino acids, as biocs already pointed out.

Reasons for the occurrence of the twenty coded protein amino acids (2) has an informative and interesting outline. This is the paragraph on the topic of chirality:

This is related to the question of the origin of optical activity in living organisms on which there is a very large literature (Bonner 1972; Norden 1978; Brack and Spack 1980). We do not propose to deal with this question here, except to note that arguments presented in this paper would apply to organisms constructed from either D or L amino acids.

It might be possible that both L and D lives were present (L/D-amino acids, L/D-enzymes recognizing L/D-substrates), but, by random chance the L-world outcompeted the D-world.

I also found the same question in a forum where one of the answers seems intriguing. I cannot comment on the reliability of the answer, but hopefully someone will have the expertise to do so:

One, our galaxy has a chiral spin and a magnetic orientation, which causes cosmic dust particles to polarize starlight as circularly polarized in one direction only. This circularly polarized light degrades D enantiomers of amino acids more than L enantiomers, and this effect is clear when analyzing the amino acids found on comets and meteors. This explains why, at least in the milky way, L enantiomers are preferred.

Two, although gravity, electromagnetism, and the strong nuclear force are achiral, the weak nuclear force (radioactive decay) is chiral. During beta decay, the emitted electrons preferentially favor one kind of spin. That's right, the parity of the universe is not conserved in nuclear decay. These chiral electrons once again preferrentially degrade D amino acids vs. L amino acids.

The ribosome holds the peptide-bound tRNA and aminoacyl-tRNA in the right orientation to catalyze the peptidyltransferase reaction.

If the incoming aminoacyl-tRNA was the other enantiomer, the amino acid moiety would not fit properly into the ribosome active site. In other words, the shape of the ribosome selects for specific amino acid enantiomers. In abiotic mixes, the creation of amino acids and their polymerization is non-catalytic, and so there is no specificity or selection for certain enantiomers.

If you're asking the "biogenesis" question, then I think the answer is that we don't know the original selection, and it may just be chance. But once biochemistry began making and using them, of course they were all the same. But frankly "why not D-amino acids" makes about as much sense as "why not 22 amino acids, or 23, or 24, or 25?" Because that's what happened.

As far as I know, it is unknown why we only see left-handed and not right–handed amino acids. A recent article speculates that the weak force could be responsible for a tiny asymmetry in energy levels between the stereo-isomers. However, if the effect is tiny, its hard to see why it should have biological implications. In 2004, Tamura and Schimmel showed that RNA has a preference for L-amino acids, whereas mirrored RNA has a preference for D-amino acids. They conclude:

These results suggest the possibility that the selection of L-amino acids for proteins was determined by the stereochemistry of RNA.

So the next question is: Why do we observe only one kind of RNA? It could just be by chance, that a polymer of one RNA configuration became self-replicating.

The normal results of an attempt to assemble proteins with mixed chiral amino acids is a protein that fails to fold.

The general assumption due to this result is a choice has to be made very early on to use all right-handed or all left-handed amino acids. There doesn't seem to be any particular reason to choose one way over the other except for prevalence.

Using only 1 chirality for the ecosystem simplifies protein formation and folding frameworks. In theory, you could have a codon system with 40 distinct values (and 24 redundant values): glycine, stop codon, and left/right variations of each other amino acid. However, the proteins and nano-"machinery" required to support this would be crazy complex. It's much more efficient to build around 1 chirality and stick with it.

Alternately, you could have enzymes specifically designed to flip proteins of the "wrong" chirality depending on species.

With that in mind, an ecosystem with different species having different amino acid chirality would be digestive chaos. If you eat a dextro-protein steak, your digestion will break the proteins into... dextro amino acids. Best outcome: they fail to absorb and get flushed down the toilet. Worst outcome: they get absorbed and your cells use them to make proteins - causing severe folding errors, nonfunctional proteins, and a host of untraceable health problems that would likely get misdiagnosed as a spirochaete infection (wide-ranging health problems that aren't limited to a specific region and have no discernible pattern).

Most answers to the question of homochirality have considered the reason (if any) for amino acids in proteins being L rather than D. i.e. Why L? I have nothing further to add to that discussion.

A couple of answers have addressed the question of why there is not a mixture of L- and D- amino acids in proteins, i.e. Why all L? Two distinct arguments have emerged. I shall consider them in turn, and attempt to develop them a little further.

@Joshua stated that “the results of an attempt to assemble proteins with mixed chiral amino acids is a protein that fails to fold”. I think one can cast this more precisely in evolutionary terms. The α-helical secondary structure component of proteins probably arose early as it involves only the protein backbone, rather than the particular amino acid side-chain. Nevertheless, it is not possible to substitute a D-amino acid in an α-helix of L-amino acids, without disrupting the structure. Hence one can suppose that homochirality was necessary for the creation of standard ‘building blocks’ for early protein development.

@KAM has considered the question of the stereochemistry of the active site, specifically that of the peptidyl transferase. The stereochemistry of the active site of the interaction of enzymes with their substrates is a strong argument for homochirality, but it struck me that this needs to be addressed before peptide-bond formation — in the synthesis of the amino acids themselves.

It turns out that I was late to the party. In the 2002 edition (I haven’t checked earlier ones) of the text book, “Biochemistry”, by Berg et al., section 24.2.2 of the chapter on amino acid synthesis is entitled:

A common step determines the chirality of all amino acids

Amino acids are synthesized, directly or indirectly, via reactions catalysed by transaminases (aminotransferases) which convert keto-acids to amino acids:

These transaminases have a similar active site involving a lysine and arginine residue and use the cofactor, pyridoxal phosphate. The reaction mechanism (below) may appear a little complex, but the step at which the chirality of the amino acid is determined is the conversion of quinoid intermediate to external aldimine: 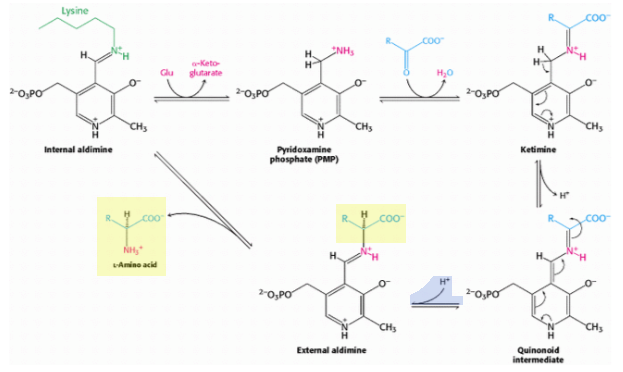 To quote from Berg et al. (from which the diagrams are taken):

The chirality of the amino acid formed is determined by the direction from which this proton is added to the quinonoid form. This protonation step determines the l configuration of the amino acids produced. The interaction between the conserved arginine residue and the α-carboxylate group helps orient the substrate so that, when the lysine residue transfers a proton to the face of the quinonoid intermediate, it generates an aldimine with an L configuration at the Cα center. 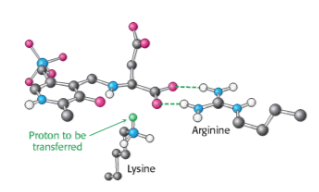 So it would seem more likely that the stereochemistry of the active site of peptidyl transferase was an evolutionary response to the existing homochirality of amino acids, rather than vice versa.

1
Why aren't D-amino acids used in proteins?
16
What happens to dextrorotatory amino acids in humans?

18
What is the prehistory of amino acids in cells?
11
Chiral (a)symmetry of curly hair (and fur)
7
How are amino acids neutral at physiological pH?
3
What signals a ribosome to stop production when the cell is out of available amino acids?
5
What are 'acid stable' amino acids?
2
Reading an amino acid physicochemical properties diagram
4
Organisms that use more than the 20+2 commonly occurring amino acids?
3
About the definition of ketogenic amino acid