What determines when twining plants twine?

Some climbing plants, such as clematis and honeysuckle use their leaves like tendrils. Others, like Aristolochia use their stems. The young leaves of these plants are able to twist around slender objects. Twining stems twist around whatever they touch, be it a pole, branch, wire or chair leg. The stems will wind clockwise or counterclockwise, depending on the species of plant.

AFAIK, plants can't see or feel, but the way they climb clearly shows they have some way of knowing when to twine. How does this work?

This is a special case of tropism, called thigmotropism. In botany, tropism is a modified growth in response of an environmental stimulus. The most famous tropisms are:

The mechanism of thigmotropism can be compared to that of phototropism: in phototropism, the shaded side of the stem apex has a higher concentration of auxins compared to the sunny side and, therefore, grows more quickly, and the result is that the plant grows towards the light source (positive phototropism).

In thigmotropism, there are mechanic receptors in the epidermis which detect touch (mechanoreceptors), possibly membrane proteins. Then, after detecting touch, there is a signal transduction somehow, which "informs" the cells opposite to the touching side about the stimulus, and those cells exhibit an increased rate of growth.

The mechanism may be similar to that of phototropism, also depending on auxins. According to Scorza et al. (2011):

Ultrastructural studies revealed that most thigmotropic and thigmonastic movements are caused by differentially changing cell turgor within a given tissue. Auxin has emerged as a key molecule that modulates proton extrusion and thus causing changes in cell turgor by enhancing the activity of H+ATPase in cell membranes. (emphasis mine)

The actual details regarding the mechanism are not well understood, and they are way less understood than those of phototropism or gravitropism, for instance. The result, however, is that the touching side grows less that the opposite side: 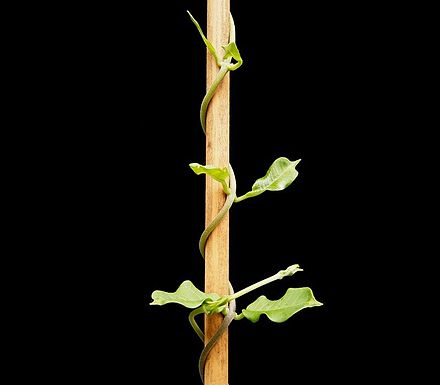 If you combine thigmotropism and negative gravitropism (the growth against gravity), the result is that the climber grows up going around the support, in an upwards spiral: 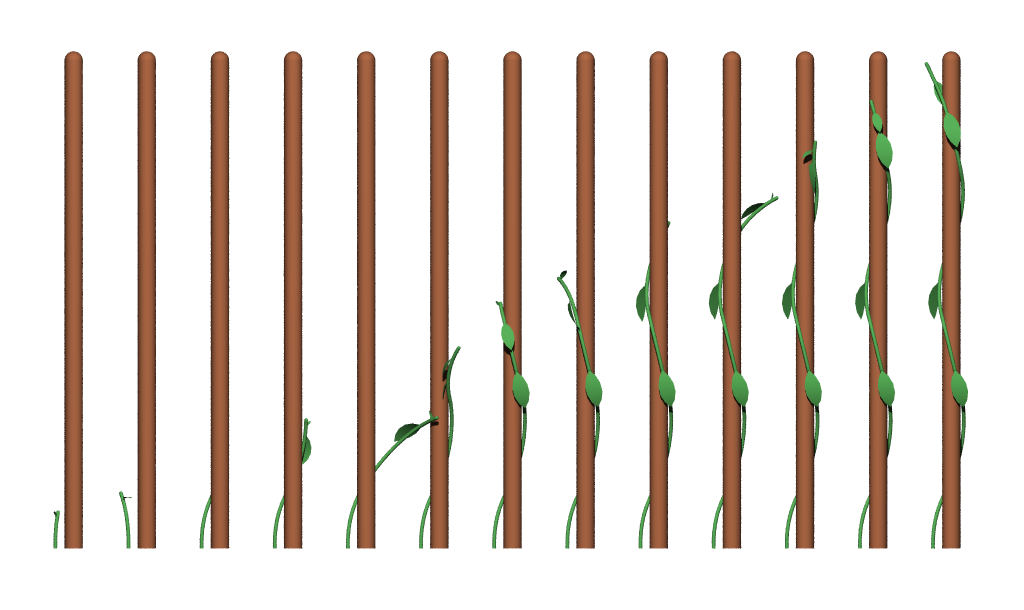 Share
Improve this answer
edited May 16 '17 at 23:48
answered May 10 '17 at 0:23
user24284user24284
$\endgroup$
Add a comment  |
Highly active question. Earn 10 reputation (not counting the association bonus) in order to answer this question. The reputation requirement helps protect this question from spam and non-answer activity.

3
What is the difference between drought resistant non-succulent plants and plants that cannot be allowed to dry out?
5
What determines the autumn leaf color?
3
What virus transforms full grown plants?
22
What determines the spiral direction of plants?
2
When does meiosis occur in flowering plants?
15
Is the amount of the soil reduced when plants grow?
2
Do all plants grow roots when separated from parent?
3
Where does the mass come from when you grow plants in water?
1
What is the minimum water consumption for Arabidopsis and other plants?