During interphase, is DNA wrapped around histones?

DNA condensation using histones is not only meant to form the chromatids for mitosis/meiosis, but also one of the factors that control gene expression. Tightly packed heterochromatin is not being expressed, whereas unpacked euchromatin is transcriptionally active. The process of condensation is controlled by enzymes such as histone actelytransferase (HAT) and deacetylase (HDAC) that change the electrostatic properties of the histone proteins. Positively charged lysine in heterochromatin histones allows condensation with negatively charged DNA. By acetylation of these lysines, they become neutral and the heterochromatin turns into euchromatin, which, provided the necessary activators etc., can now be translated. To silence gene expression, the process is reversed.

Gene expression control is very complex and histone acetylation is only one factor out of many. Nonetheless, you see that histones are a crucial part of the chromosomes and are not only formed during mitosis or meiosis. 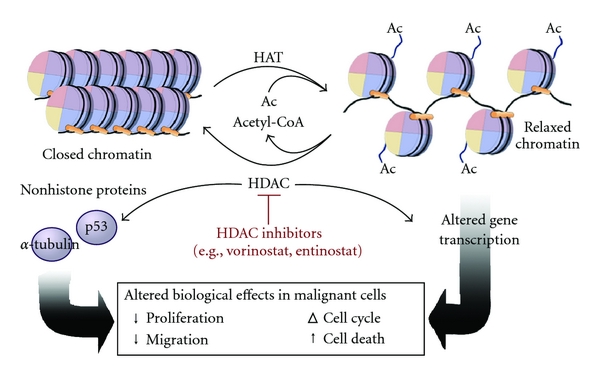 Not the answer you're looking for? Browse other questions tagged cell-biology chromosome mitosis cell-cycle or ask your own question.

6
What are centromeres *really*?
0
Do chromosomes uncoil in interphase II?
9
How do chromosome pairs get "paired up" for protein synthesis?
4
What is the number of DNA strands per cell?
1
What is the difference between these two depictions of chromosome?
4
How does DNA from sperm fuse with DNA in egg?
7
How is a portion of DNA selected and unwound from nucleosome?
1
Do chromosomes line up as pairs in mitosis or meiosis?
2
When does DNA replicate actually?
0
When the sister chromatids are joined in the centromere, why is it stated that the number of chromosomes is 46 and not 72?