How does a tiny spider interpret/cope with gravity?

Does a tiny spider know that it is walking on a wall or a ceiling as opposed to the (horizontal) ground? Does gravity play a role in this knowledge?

Can you point me to any research in this area?

The following is an excerpt from work of the German Aerospace Center, showing how the orientation of a fish is guided via a mixture of gravity and light: 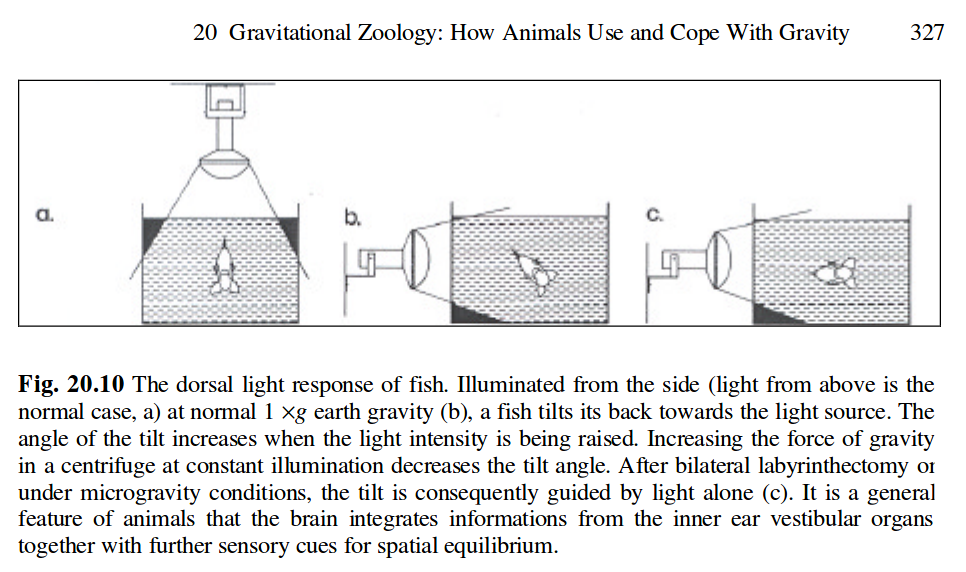 Your question's title ("Sense of gravity felt by other organisms" - edited since it was originally posted) is quite broad, since "other animals" is all Animalia except Homo sapiens, which gives us at least 1 million species...

Therefore, I'm going to answer only your "The Question", regarding spiders:

How does a tiny spider senses gravity?

First, it's worth noticing that while the gravitational acceleration is a constant (at sea level), the weight of the organism depends on its mass. Thus, for tiny animals, the effects of the gravitational force can be extremely small, and because of that those animals require very precise sensitive structures in order to measure the gravity.

Aquatic invertebrates have statocysts and statoliths, which are well known. However, spiders use another method to perceive gravity: they use their sensorial "hairs". According to Bender and Frye (2009):

In the absence of wind, an animal standing at rest is acted upon only by the force of gravity. An animal might not explicitly calculate the global gravitational vector per se, but rather may actively modulate local joint angles and torques to implicitly compensate for gravity's pull. In many instances, insects and crustaceans measure the angles of their appendages' joints using clusters of mechanosensitive hairs, called hair plates.

According to Seyfarth, Gnatzy and Hammer (1990), one of these organs is the coxal hair plate:

Natural stimulus situation and the spike response to maintained deflection suggest that these hairs are used in proprioception and graviception.

Here is an image: 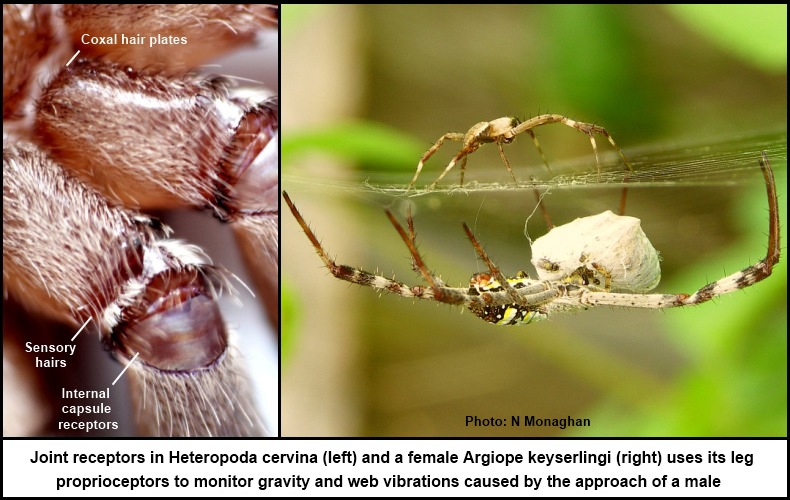 However, the same authors say:

Yet behavioral changes following selective hair-plate ablations are not very pronounced. Unilateral removal of hair-plates produced significant increases in average body height in 7 of 10 animals, while the angular orientation of the long body axis with respect to gravity remained unchanged after hair-plate removal.

That means that another sensors may play a role in graviception, such as proprioceptors. Still according to Bender and Frye (2009):

In addition to measuring joint position, invertebrates also have specializations for measuring joint load. Whereas our bones have no active sensory capacity and instead our sensors are imbedded in surrounding, soft tissues, many invertebrates are equipped with sensory arrays embedded in the exoskeleton at strategic points and with specific orientations. Called campaniform sensilla in insects, lyriform organs in arachnids and centipedes. (emphasis mine)

Not the answer you're looking for? Browse other questions tagged evolution senses or ask your own question.

16
How did the huge dinosaurs cope with gravity and loads on bones, etc.?
5
How did this spider evolve to mimic exactly a human face and arms?
5
How does rate of evolution/innovation scale with population size?
13
How does the brain immediately know when one's thirst has been quenched?
1
Does size correlate with sensory abilities?
1
How does heredity work with Endogenous retrovirus?
1
What is the direction of the processing of light by the (human) retina and how does it happen?
4
How exactly does sensory substitution work?