How do trees communicate in the "Wood Wide Web"?

I read on The New Yorker - The Secrets of the Wood Wide Web that trees communicate with each other through electrical impulses sent through their roots. Through these impulses they can ask other trees for some nutrient if they are getting it in insufficient amount or warn the other trees about an upcoming pest attack. This phenomenon is termed as the Wood Wide Web.

So how do trees distinguish in different types of impulses that they receive if they don't even have a brain? And does this process show any resemblance to nervous system in animals?

Additional YouTube video: Trees can talk to each other, but how?

I have to say: when you claim that "trees communicate with each other through electrical impulses sent through their roots", you're thinking about Avatar.

Joking apart, what you call wood wide web is the mycorrhizal network.

Mycorrhizal fungi are well known to botanists and ecologists. They are the fungal partner in the mycorrhiza, which is a symbiotic association between a fungus and a plant. 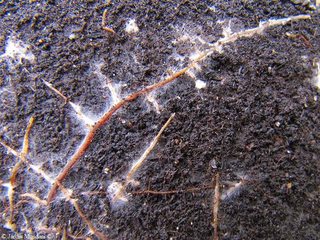 Mycorrhizal hyphae (white) in a root

The novelty about this mycorrhizal network is that, as it was demonstrated, plants can use it to exchange some chemical substances. And, in certain cases, this exchange can be used to improve disease resistance.

However, there is no electrical impulse in this process.

In theory, plants can also communicate with each other through underground common mycorrhizal networks (CMNs) that interconnect roots of multiple plants. However, until now research focused on plant-to-plant carbon nutrient movement and there is no evidence that defense signals can be exchanged through such mycorrhizal hyphal networks. Here, we show that CMNs mediate plant-plant communication between healthy plants and pathogen-infected tomato plants (Lycopersicon esculentum Mill.). After establishment of CMNs with the arbuscular mycorrhizal fungus Glomus mosseae between tomato plants, inoculation of ‘donor’ plants with the pathogen Alternaria solani led to increases in disease resistance.

This other research demonstrate that the mycorrhizal network can be used to warn neighbouring plants of aphid attacks (Babikova et al., 2013):

Here, we show that mycorrhizal mycelia can also act as a conduit for signalling between plants, acting as an early warning system for herbivore attack. Insect herbivory causes systemic changes in the production of plant volatiles, particularly methyl salicylate, making bean plants, Vicia faba, repellent to aphids but attractive to aphid enemies such as parasitoids. We demonstrate that these effects can also occur in aphid-free plants but only when they are connected to aphid-infested plants via a common mycorrhizal mycelial network. This underground messaging system allows neighbouring plants to invoke herbivore defences before attack.

In both cases the mycorrhizal networks play an important role in exchanging chemical substances among the plants.

The network has a dark side too: it can be used to deliver allelochemicals from one plant to another, greatly increasing allelopathy. According to Barto et al. (2011):

Finally: don't rely on media to get scientific information, specially in these times of alternative facts. Sometimes you can get good information in the media, but good and accurate information is way harder to find (an example is this BBC page about the mycorrhizal network). However, in defense of that page in The New Yorker, there is no mention to electrical impulses.

Not the answer you're looking for? Browse other questions tagged botany ecology mycology communication or ask your own question.

38
Has there even been a clinical study where healthy volunteers consented to be infected with a pathogen?
28
Is it possible to kill parasitic worms by intoxicating oneself?
33
Can a bacterium infect another bacterium?
22
What determines the spiral direction of plants?
11
Do spiders learn how to build webs?
9
What is this crow eating, and is it a common part of the corvid diet?
9
Why doesn't local anesthesia affect muscles?
16
Are 2 eyes necessary for 3D vision?
8
Why does the T7 RNA Polymerase require a reducing environment ie. DTT
3
Haploid eukaryotes?
See more linked questions

3
How do fish communicate?
5
How does one calculate the amount of oxygen produced by trees?
5
How important is dead wood to the ecology of a forest and how much dead wood should remain?
2
What is the symbiotic relationship between truffle fungi and their host trees?
1
How do trees grow?
1
How exactly is the wood fossil process?
3
Do the organisms within a lichen communicate with each other?
0
Is it true to say that the genome of trees includes or at least "encapsulates" the genome of mushrooms?