Is there a theoretical maximum on the number of sexes a given species can have?

Many species of fungi are both sexually reproducing and apparently have more than two sexes. (Depending on one's definition of sex.)

There are also species of lizards with more than two biologically determined "gender morphs". It is even more debatable than in the case of fungi whether these morphs should be considered separate "sexes" or not, since their mating compatibility network is bipartite.

Question:
Is there a theoretical maximum on the number of sexes a given species of organism can have?

Elaboration: There would also be a lot of different possibilities -- already with three sexes, one can imagine at least two different means by which sexual reproduction could occur -- any one of three combinations of two individuals from two distinct sexes (most likely in "rock-paper-scissors" fashion), or the combination of three individuals from all three distinct sexes.

How, for example, might either of these two scenarios be maladaptive compared to sexual reproduction of two individuals in species with two or fewer sexes?

I am asking about species with more than two sexes/mating types in general, not necessarily about situations where more than two sexes are involved in a single reproductive event. (Contrast with this related question.) I am also not restricting to animals, or even multi-cellular organisms, or even eukaryotes, since these restrictions might affect the answer. (Contrast with this related question.)

evolution sex sexual-reproduction
Share
Improve this question
edited May 18, 2017 at 9:05

Well, your question as a whole is quite broad, with a lot of sub-questions or items (and some inaccuracies, as in the case of flatworms) . That being said, in this answer I'll address only your main question (and nothing more), which is ipsis litteris:

Is there a theoretical maximum on the number of sexes a given species of organism can have?

All the content in this answer is based on this excellent book from Michael Majerus, Sex Wars: Genes, Bacteria, and Biased Sex Ratios: 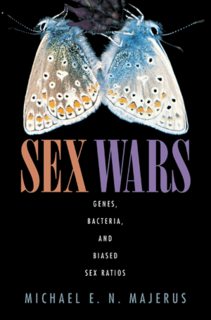 Unfortunately, I don't have my library anymore and I can't find this book online. So, instead of (boringly) quoting the author, I'll try to summarise his hypothesis. Of course, to a better explanation, you can read the book itself.

Let's start supposing that you're pretty comfortable with the concept of sexual reproduction and sexual types, which I think you are.

Suppose we have two sexual types, called A and B. They have receptors in their gametes' membranes, in such a way that you cannot fusion A + A or B + B gametes, but you can fusion A + B gametes. If the A gamete could fertilize another A gamete, you'll have all gametes in a given gonad fertilising each other, which makes no sense. So, will assume that a given sexual type has mechanisms to avoid fertilising the same sexual type.

So far, what I described is the common system with two sexes, be them "+ and -" or "male and female", it doesn't matter.

Now, let's suppose three sexual types: A, B and C. For this to work, their membrane receptors must be such that A can recognise B and C, but not A. This is theoretically possible (although it is a mess genetically speaking). Thus, the possible matings are:

So, why cannot we find sexual systems with more than two sex types?

The answer is: we can, but not among species which perform fertilization (animals, plants, most of fungi, most of algae etc...).

This is the problem: in fertilization, or syngamy, the gametes don't simply join their nuclei. It's more complex than that: there is cytoplasmic inheritance, or extranuclear inheritance.

To keep the example among animals, the group you said you know best: mitochondria in the zygote comes from only one gamete (the female one). That happens to avoid what we call heteroplasmy, which is the presence of more than one type of organellar (mitochondrial, in this case) genome in the zygote.

In sex systems with only two sexual types the rule is very clear: "mitochondria comes from this one, but not from that one". That's it, case solved.

Therefore, cytoplasmic inheritance is, probably, what avoids the evolution of more than 2 sexual types.

How can we support this claim?

Let's find what happens in species that perform sexual reproduction, but no fertilization (and, therefore, don't have the cytoplasmic inheritance problem). The best example are protozoans that perform conjugation.

Tetrahymena is a well known example. In these protozoans, according to Umen, 2013:

An individual Tetrahymena cell expresses one of seven possible mating types (I–VII) that it faithfully and indefinitely maintains during vegetative propagation. After mating each new exconjugant has a recombinant micronucleus formed from its two parents. However, rather than just expressing one of two parental mating types, the sexual progeny of Tetrahymena undergo a kind of genetic roulette that allows them to choose at random up to seven possible mating types. (emphasis mine)

So, we have sex mating types. How that system works? According to Cervantes et al., 2015:

The unicellular eukaryote Tetrahymena thermophila has seven mating types. Cells can mate only when they recognize cells of a different mating type as non-self.

The record, however, probably belongs to the basidiomycete Schizophyllum commune, with more than 28.000 sexual types! (Whitfield, 2004) To support the idea that cytoplasmic inheritance is in fact the main factor that avoids more than 2 sexual types, it's worth noting that biparental mitochondrial transmission is quite common in fungi (Barr, Neiman and Taylor, 2005).

Not the answer you're looking for? Browse other questions tagged evolution sex sexual-reproduction or ask your own question.