what is the meaning of VIP-cre::LSL-TOM::SOMGFP(GIN) mice?

I am reading the following paper and the researchers use

I have tried to look it up in the web. I understand, for instance, that AAV1 is an engineered virus, and that CaMKII is a promotor, that TOM is a red fluorescent protein, GCaMPis created from fusion of green fluorescent protein with other peptides etc.

However, I have a dificulty in putting together the pieces and understending the whole meaning of "VIP-cre::LSL-TOM::SOMGFP(GIN)" (and the other mice types memtiond).

I'll be greatfull if you could answer some of these questions, of refer me to a suitable reference. I looked a lot but the references that I find are lab references with technical details and numbers. I didn't find anything specific for this mice types that contains explanations. 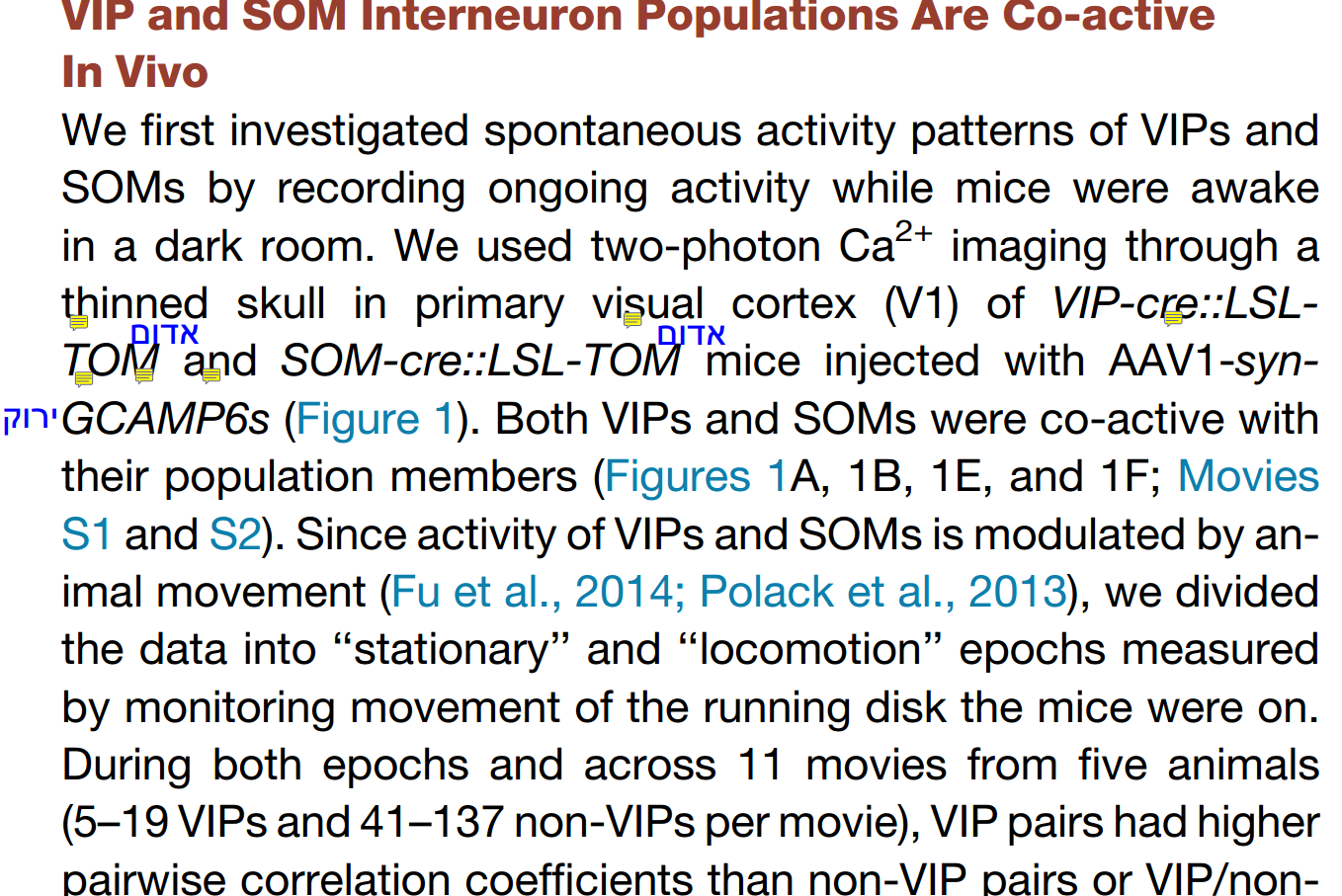 I think I can help explain all but your 3rd question.

1) Actually every cell in the animal has a VIP::Cre (excepting blood of course or sex cells that got the non transgene allele during meiosis. This is because usually the cre genes are kept at Hets during mouse mating).

2) All neurons (and all cells; see answer 1) will contain the genetic construct VIP::CRE. The intent is in the VIP::CRE mouse, only cells that would express VIP would express Cre recombinase. This means that other tissues in the body that express VIP should also fluoresce red in a VIP::CRE/LSL-TOM mouse. As an aside, all cells that normally make SOM should also be making GFP in the SOM::GFP mouse, but every cell will have the DNA transgene.

3) This question is outside my breadth of knowledge. I've done lots of work with transgenic mice, but other than looking up that that viral construct has something to do with calcium and imaging in neurons, I am not sure.

Per Bryan Krause: "...the expectation is that it will infect most if not all cells, not even just neurons, but it is using the 'synapsin' promotor which is neuron-specific (but would be expressed in both VIP and SOM cells, as well as other neuron types). Presumably the authors are using calcium imaging to detect activity across a whole mixed population but then using tdTomato to identify one subpopulation or the other, depending on which animal is used."

4) For VIP-cre::LSL-TOM::SOM-GFP(GIN). As written, this would imply the expression of Cre is necessary to activate transcription and encoding of tomato red in VIP expressing cells. But that GFP is already active in SOM expressing cells from day one of development.

Some uses of Cre-Lox systems are illustrated here. This picture from that website demonstrates graphically what is going on with a LSL construct. 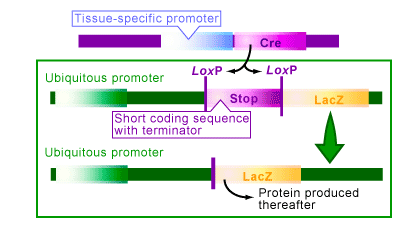 Your system has tomato red instead of lacz and is using VIP expressing cells as a targeted system.

Not the answer you're looking for? Browse other questions tagged genetics neuroscience molecular-genetics brain protein-engineering or ask your own question.

1
Role of Fbx15 in ES cells and its use in assaying for iPS cells (Yamanaka paper and others)?
4
If people with colorblindness lack one type of cone cells, shouldn't they be unable to recognize one particular color?
5
How can fruit flies and mice share the same gene that says to build an eye if they evolved separately?
5
Can the negative afterimage appear only if there is light or is it possible in darkness?
3
What is a starter cell?
2
What is a CAG::ChR2 rat?
0
What does Ercc1-/- / DAT-Cre+ mean?