Are penguins plantigrade or digigrade?

I'm trying to rig a 3D model of a penguin, but I don't know where to put the bones near the ankle because I can't tell if they're digigrade or plantigrade. Nearly all birds are digigrade, but penguins spend a lot of time walking and don't generally grasp or run with their talons.

The penguins are highly specialized for their flightless aquatic existence. The feet are located much farther back than those of other birds, with the result that the bird carries itself mostly upright; its walk can thus be described as plantigrade (i.e., on the soles). The sole comprises the whole foot instead of just the toes, as in other birds. The most notable characteristic of the group is the transformation of the forelimb into a paddle. This is accompanied by a body morphology particularly adapted to movement in a liquid medium. The thoracic (rib) cage is well developed, and the sternum bears a pronounced keel for the attachment of the pectoral muscles, which move the flippers. The flipper has the same skeletal base as the wing of flying birds but with its elements shortened and flattened, producing a relatively rigid limb covered with very short feathers—an ideal organ for rapid propulsion. The body plumage likewise consists of very short feathers, which minimize friction and turbulence. The density of the plumage and the layer of air that it retains provide almost complete insulation of the body. 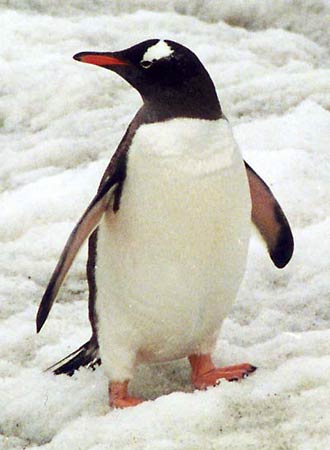 19
Do species other than humans have distinct daily feeding patterns?
9
Why are butterflies drinking blood?
5
If birds are dinosaurs, then are mammals reptiles?
8
Why do emperor penguins breed during the antarctic winter?
48
Are there any animals that are both poisonous and venomous?
6
What is this white/translucent with brown back, larva/worm creature I found, in the UK, on my lettuce?