What is the mechanism by which passive immunity works?

My idea is that passive immunity can be used to cure an individual who is infected with a certain disease. For example, for someone infected by clostridium tetani, you would inject them with an antiserum. The antibodies give protection against bacteria, until the active immune response takes action. In this link (http://pmt.physicsandmathstutor.com/download/Biology/A-level/Notes/Edexcel-IAL/Unit-4/6-Infection-Immunity-and-Forensics/Set-A/Vaccines.pdf), page 3, the graph shows that the level of antibodies in the blood actually rises after injection! To me, this naturally begs the question, what is the mechanism by which passive immunity operates (because I want to know why the level of antibodies rise in order to understand the situation dynamically)?

[Note: would I be correct in saying that a short answer would be that the level of antibodies rises because the active immune system is stimulated due to the enhancement of phagocytosis by macrophages when the antibodies attach to the antigens? My book states that release of antibodies (by B-cells) that bind to the antigen is required to allow the macrophages to engulf the pathogen with the specific surface antigen.]

I commented on this question, but the OP's response prompted me to think again. Here is the graph from the document that the OP linked to: 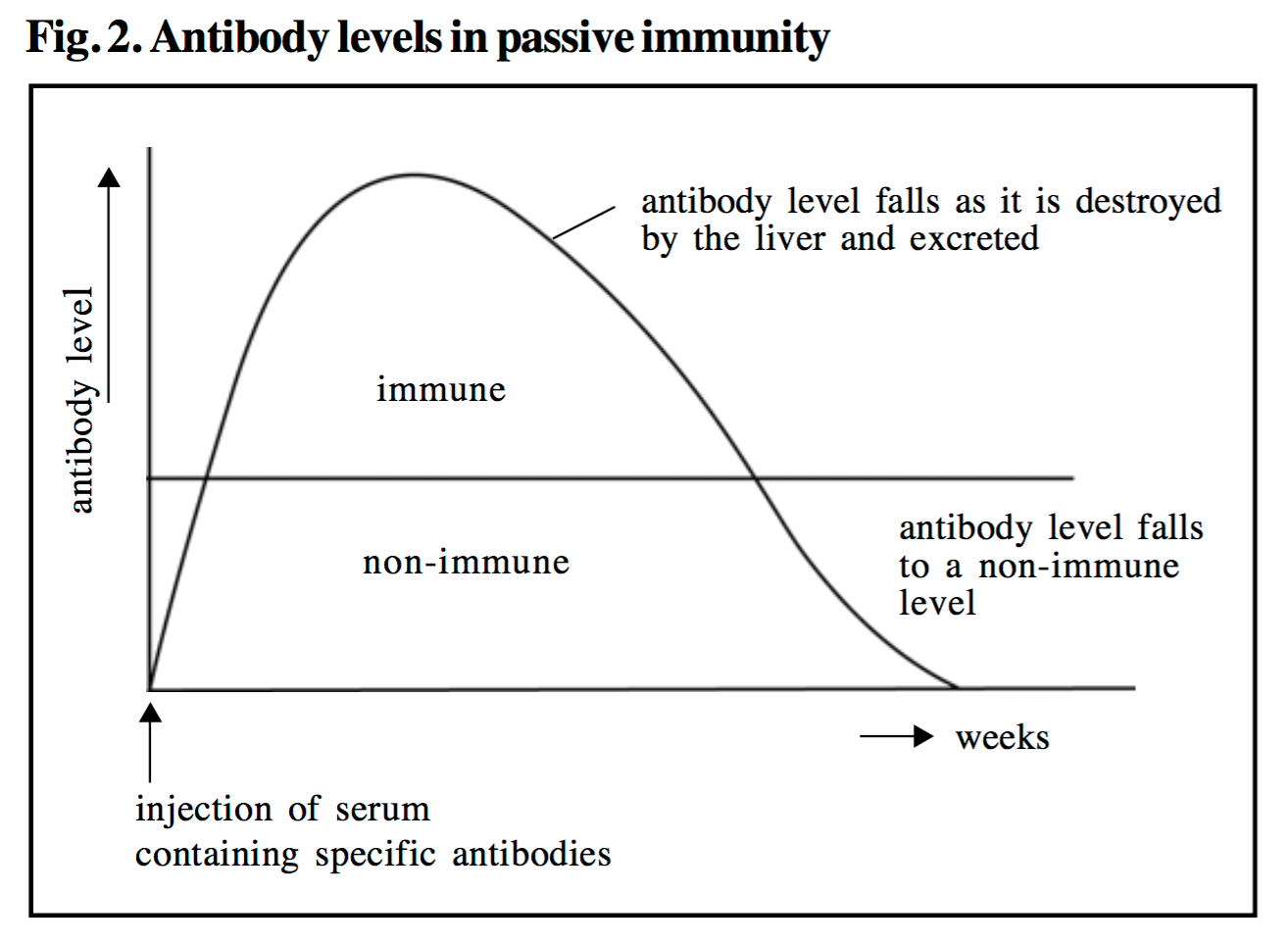 Clearly what is confusing is that the parameter referred to as 'antibody level' rises quickly, but not as a step. In terms of the x-axis, vaguely labelled as weeks, it looks as if the level of antibody continues to rise over several days at least. The OP attempts to read into this an effect whereby the injected antibodies somehow stimulate the immune response in the recipient.

My knowledge of immunology isn't extensive enough to rule that out completely, but I don't think that is what this sketch graph is illustrating since the levels of these antibodies is shown as falling to zero due to destruction and excretion. This indicates that what is being graphed is just the injected antibodies.

In the absence of some real data for the time-course, my explanation for the rising phase illustrated is that this is showing levels of antibodies in the blood. However the prophylactic use of injected antibodies will often involve an intramuscular injection near the site of an injury. Here for example is a quotation from a recent review on the use of recombinant immunoglobulins (RIG) against rabies:

Because vaccination needs time to induce a humoral response, application of RIG immediately after exposure is important to inhibit viral spread, even when accelerated vaccination schedules are applied. As much of the RIG dose as anatomically feasible should be injected into the area around the wound, and the remaining volume then given intramuscularly at a site distant from rabies vaccine inoculation. Isotope-labelled HRIG, injected around simulated bite wounds, diffused readily into surrounding tissue and about 25% was still detectable around the injection site 24 h later.

Thus the level of antibodies in the blood will continue to rise as they slowly enter the circulation from the site of injection.

As Alan Boyd says, the relatively slow rise is due to gradual uptake of the injected antibody.

If you deliver the antibodies by intravenous injection or another mode that allows rapid uptake (I use intraperitoneal injection in mice) then the antibody levels peak rapidly, less than a day and probably a couple hours, and then drop off; there is no continued rise as shown in the chart, which shows that there's no effect on production of new antibodies.

The passive immunization via the intramuscular route does not accomplish an instantaneously available, maximum anti-HBs titer. There seems to be a great range of variation in uptake and elimination of the immunoglobulins in man.

The antibody levels go up, because you're adding more antibodies. The increase in antibodies isn't from the patient, it's from the injection of antiserum.

The half life of IgG (the most common antibody) is around 20 days. IgM and IgA last for 5-8 days. Reference. So as you can see, the antibody levels increase due to the injection of antibodies into the patient.

The comment by Alan Boyd gave the answer I was just typing out, but I'll still put it as an answer.

Not the answer you're looking for? Browse other questions tagged human-biology immunology population-dynamics vaccination immunity or ask your own question.

3
Where do the antibodies that trigger the specific immune response come from?
2
Why doesn't infection with Clostridium Tetani immunize you?
0
How close is the U.S. to herd immunity, assuming long-term immunity?
1
Help with understanding XKCD's “How Vaccine Failure due to Viral Vector Immunity Works” Why is this response a failure exactly?
3
Why is there not an immune response to injected immunoglobulins?