How do the three mechanisms of the 1000X improved "new" vancomycin work together?

One hard-to-treat infection that has been worrying doctors is vancomycin-resistant enterococci or VRE.

It has been found in hospitals, can cause dangerous wound and bloodstream infections and is considered by the WHO to be one of the drug-resistant bacteria that pose the greatest threat to human health.

Some antibiotics still work against VRE, but the 60-year-old drug vancomycin is now powerless.

The Scripps team set out to see if they could revamp vancomycin to restore its killing ability.

They made some strategic modifications to the molecular structure of the old drug to make it better at attacking bacteria where it hurts - destroying cell walls.

Three changes in particular seem to be important, increasing the strength and durability of the drug.

Lead researcher Dr Dale Boger explained: "We made one change to the molecule vancomycin that overcomes what is the present resistance to vancomycin. And then we added to the molecule, two small changes that built into the molecule, two additional ways in which it can kill bacteria. So the antibiotic has three different, we call them 'mechanisms', by which it kills bacteria. And resistance to such an antibiotic would be very difficult to emerge. So it's a molecule designed specifically to address the emergence of resistance." (emphasis added)

Unfortunately I haven't been able to see the PNAS paper. The link in the BBC article just gives me this:

It sounds to me that the first change was to keep the original vancomycin's original mode of action but to make it more robust against adaptations in the vancomycin-resistant strain, but I'm not sure if that's correct.

The other two differences sound to me like two new mechanisms that were not there before - it almost sounds like they could just as well be on different molecules administered simultaneously, and that their presence on the vancomycin molecule is primarily for issues of delivery.

Are these two new changes essentially independent modes of actions that could be on separate molecules, or do they need to reside on the same molecule as the primary mechanism?

The article puts the word "mechanism" in quotes. I'm trying to understand if these are independent or work together at the molecular level - in other words do they operate together in such a way that they need to be on the same molecule?

This is typically for a paper under embargo - it can be accessed by registered journalists so they can cover the original article when it is published. The paper is now published, so I changed the first answer.

Before I go into the details, it is necessary to have a short look at the working mechanism of Vancomycin and the way bacteria got around it (which took exceptionally long given that the drug is used since 1959 in the clinic):

Vancomycin works by inhibiting the proper crosslinking of the bacterial peptidoglycan in the cell wall. This is achieved by binding to the substrate for the peptido glycane synthesis, a D-alanyl-D-alanine end of a peptide. Cells then burst due to osmotic pressure.

Resistant cells have a D-alanyl-D-lactate ending of this peptide (all details can be found here or in the introduction of the paper) which lowers the effictivity of the drug by a factor of 1000. Interestingly, this resistance mechanism seems not to have evolved in pathogen bacteria itself, but has been "borrowed" from bacteria which produce Vancomycin and need this as a self-defense (for more, see reference 2).

Vancomycin forms a pocket around the d-Ala-d-Ala substrate, which is impaired in the resistant form. Overcoming the resistance means finding a variation of Vancomycin which effectively binds both of the variants and thus inhibits proper cell wall crosslinking.

To achieve this, Okano and his colleagues chemically modified the structure of Vancomycin with several different functional groups at different sites of the molecule, see this figure from the paper (figure 4 from reference 1): 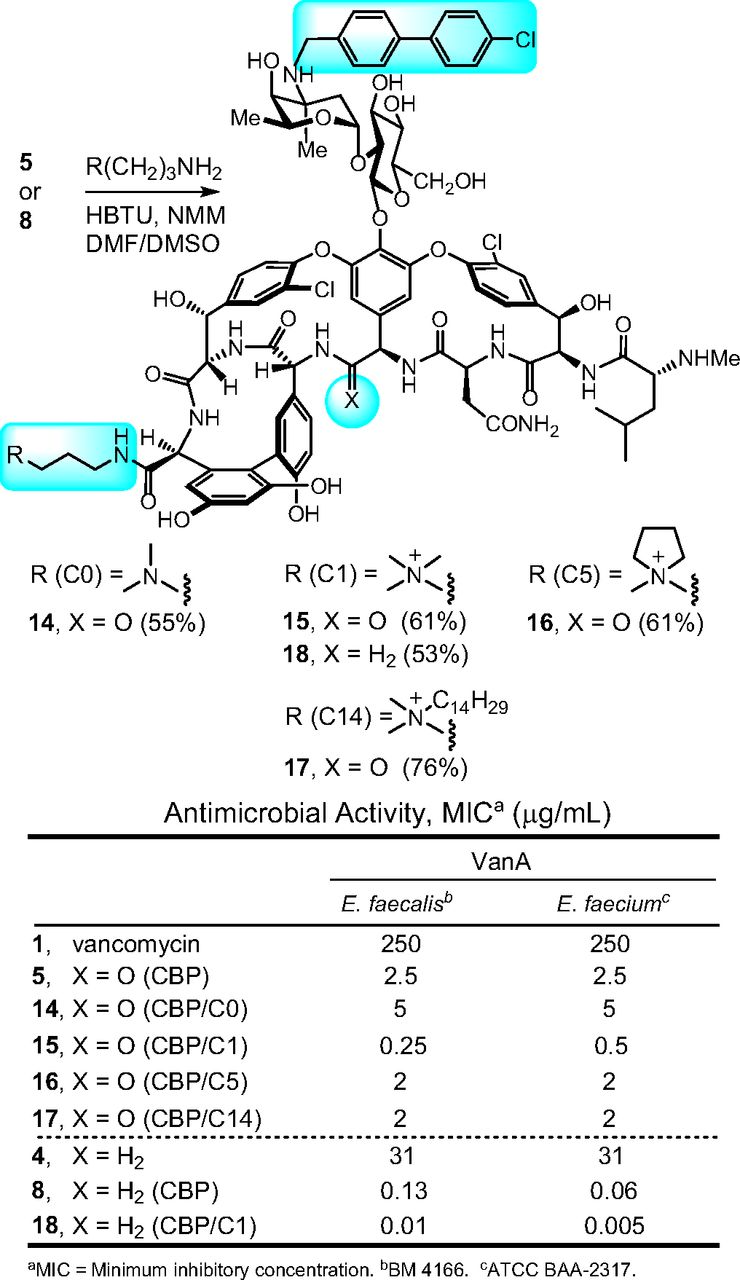 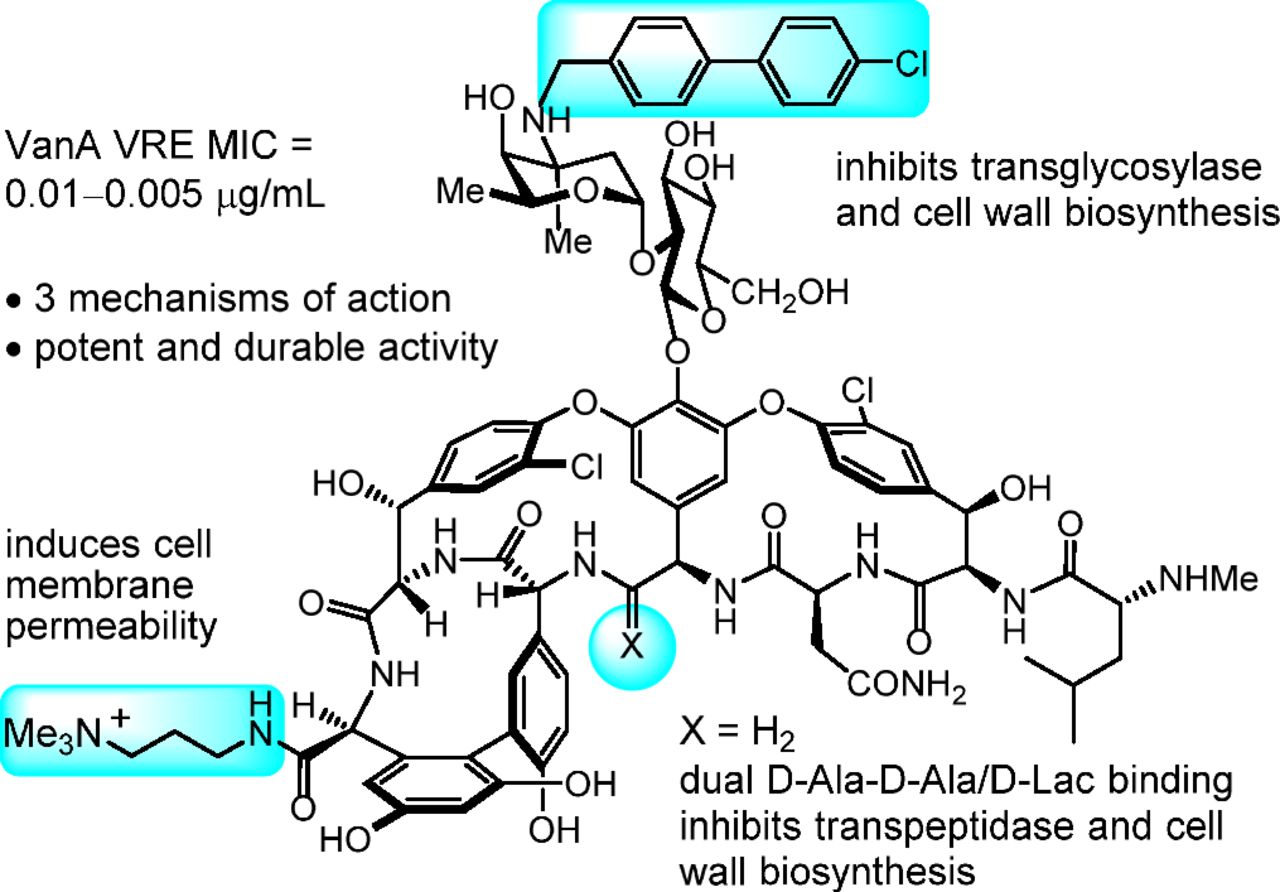 When they changed the molecule, they did not only change the binding pocket to allow binding to the different peptide substrates, they also introduced two other independent mechanisms against the bacteria. The most active compound (named 18 in the paper, seen above from figure 11) shows:

Since these are independent mechanisms, it will also prolong the time until resistance against the new version of Vancomycin (given that is has a tolerable toxicity in humans and can be introduced into the clinic) will take a while to develop. Despite the optimism in parts of the paper this resistance will eventually develop, although it is quite complicated to overcome three different mechanisms.

Not the answer you're looking for? Browse other questions tagged molecular-biology antibiotics or ask your own question.

6
What is the advantage of using plant-derived antibacterials rather than bacteria-derived antibacterials?
4
What does completing the course of antibiotics accomplish?
2
Gene cluster of interest not being amplified in PCR
2
If mutations are random, why do antibiotics 'cause' resistance?
8
Why do OX5034 GM mosquitos require the presence of tetracycline to survive? What does the drug do in this case?
3
Is bacterial resistance caused by underdosing?