What characteristics of the protein folding process ensure that the energy landscape is a funnel?

The folding funnel hypothesis states that the energy landscape that proteins observe when they fold is funnel shaped with a single global optima. This ensures that no matter what sequence of folds the protein follows, it should eventually end up in the same folded configuration thanks to the laws of thermodynamics. 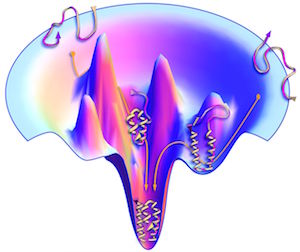 Clearly, the folding works because the energy landscape is funnel shaped. Any other configuration, e.g. a landscape with multiple significant local optima or a flat landscape, would result in a protein folding in all kinds of different ways.

What are the characteristics of the overall system that ensure that the energy landscape is funnel shaped, and that nearly any protein in an unfolded state will reach the global optima? (e.g.: is it because the proteins themselves have certain statistical properties? or it is something to do with how the types of "moves" the protein makes on the energy landscape?)

Naturally occurring proteins are evolved such that this is the case

Natural proteins only occupy a very small amount of sequence space. For a 200 aa protein, there are $20^{200} \approx 10^{260}$ possible sequences. There are nowhere near that many naturally occurring protein sequences, even if you take into account all the different alleles in the different organisms in the world.

What happens when you synthesize and express a random (non-natural) protein sequence? You get junk. It doesn't fold or it aggregates or something else happens. You don't get a stably folded protein. Heck, you don't even need to have a fully unnatural protein. You can take a naturally occurring protein and make a few mutations in it, and end up with non-folded junk.

Evolution has a very strong selective pressure to make sure proteins can fold properly and beat Levinthal's paradox. If a protein can't fold, it can't perform any function in the cell, and thus there's no selective pressure to maintain expression. (The promoters get trashed, and the DNA gets mutated away to "junk" DNA.) Only if the protein is stably folded is selective pressure maintained. So you get the one-in-a-million sequences which does have a decent folding funnel.

So it's not that there isn't protein sequences out there with a flat energy landscape, or an energy landscape with lots of local minima. It's just that whenever such a protein forms, it can't fold. And if it can't fold, it's freed from evolutionary pressure and disappears from the gene pool - either because the organism that holds it can't survive without it, or because random mutations wipe it out with random noise. It's survivorship bias -- you see proteins with a reasonably well-formed folding funnel because they're the only ones you would see.

(There are proteins out there with less-than-robust folding funnels, or with alternative energy states. A brief search of the literature will turn up a number of examples where protein folding requires cofactors or chaperones. Or where a protein has two different folded states, depending on environmental condition. Or where the most commonly folded state is only a meta-stable state, and there's a more stable conformation which the protein will convert to, if given a chanvce - amyloid fibrils being the most common example. These are refinements on the general principle. You don't need a rock solid folding funnel, you just need one "good enough" for the organisms' purpose.)

You can see some of this in the "de novo" protein designs that come out of labs like David Baker's. They're able to take a protein topology and use a computer to design a sequence "from scratch" which folds to that topology. But far from all of the sequences which their computer program spits out actually will fold. Only a small fraction of such designs will actually fold into a compact protein.

But one of the things that they've found which improves their success rate is to check the designs by "forward folding". That is, the computer spits out a design which it predicts will be a low-energy sequence for that structure. But just having a sequence which is predicted to be "low energy" isn't enough. As an additional step they run the sequence through a folding simulation to see if the sequence they designed also has a clear preference for the designed state. Roughly speaking, checking if there is a clear "folding funnel" which will drive the protein toward the desired folded state. By doing this subsequent computational check, they're able to greatly increase their success rate when the proteins are actually expressed.

Not the answer you're looking for? Browse other questions tagged proteins protein-folding thermodynamics or ask your own question.