That's not a simple mathematical addition!

If those units were mass, for instance, you could (and should) add them: a 60g Lego piece combined with a 40g Lego piece will, of course, form a combo that has 100g.

However, those numbers are Svedberg units, which is...

a non-metric unit for sedimentation rate [...] The Svedberg coefficient is a nonlinear function. A particle's mass, density, and shape will determine its S value. (emphasis mine)

Funnily enough, most of my students thought that that S stands for Sedimentation. However, it's a tribute to Theodor Svedberg, winner of the Nobel Prize for Chemistry in 1926.

Also, the rRNAs that constitute the sub-units have their own sedimentation rates (in svedberg units) as well: 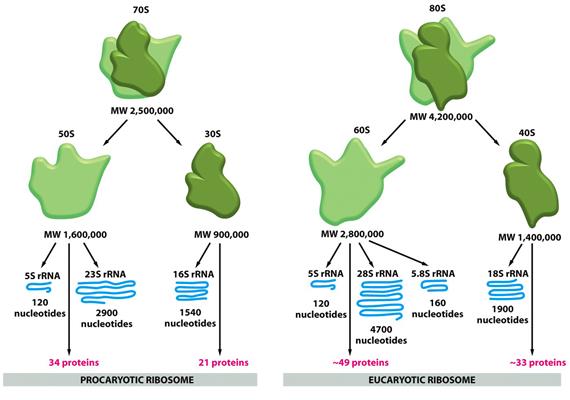 For a detailed explanation with all math you need, the other answers here and here explain it beautifully.

When a complex mixture of particles undergoes ultracentrifugation, they separate based on their shape and mass due to the force applied by the centrifuge and the counteracting frictional force of the solvent. You can read more about this procedure here. S stands for Svedberg, which is a measurement of the sedimentation rate of a particle. This is given by the formula $s=\frac{v}{a}$ where $s$ is the sedimentation coefficient and $v$ is the velocity a particle moves when an acceleration, $a$, is applied.

A 1S particle, for example, would move at 10-13 m/s when an acceleration of 1 g is applied (ignoring diffusion).

What's important to realize is that the sedimentation rate of a particle depends not only on its mass but also on its shape (among other things) since its cross-sectional area determines the effective frictional force it experiences.

The other two answers give nice detail, so I want to give a bit more mathematical answer here.

First, the S you are talking about is Svedberg units (of sedimentation coefficient, named after Swedish chemist Theodor Svedberg), used to characterize the behavior of a particle in sedimentation process, especially centrifugation. One svedberg corresponds to exactly 10-13 seconds (see other answers for more details).

Now, lets begin with equations. Sedimentation coefficient is written in equation as:

Putting the value of $v_t$ and $a$ in first equation:

As you see, although sedimentation coefficient is the ratio of terminal velocity to centrifugal acceleration, it does not depend on either of them! Now, all other things are constant, and mass would add linearly. So why does the value of $s$ decrease? It is because of non-linear addition of $r_0$ (radius). See the diagram below: 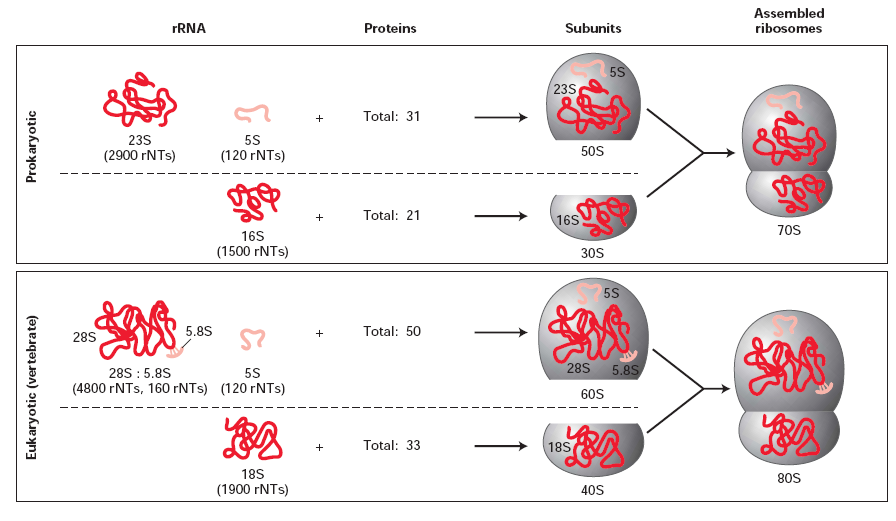 It is clearly visible now that the subunits don't just mix into each other (like two oil droplets joining to form one bigger droplet), the small subunit fits on the large subunit (real shape does vary, but roughly the shape is like this). This makes the average value of $r_0$ of ribosome larger than the sum of average value of $r_0$ of subunits i.e. $r_0 (small) + r_0 (large) < r_0 (ribosome)$. This makes the overall sedimentation rate a bit lesser than expected (remember that $s \propto \frac{1}{r_0}$). I hope this makes the concept more clear.

Not the answer you're looking for? Browse other questions tagged biochemistry molecular-biology ribosome or ask your own question.

2
Why does the inhibition of translation initiation cause the accumulation of 80S ribosomal monosomes?
6
Non-ribosomal peptide synthesis: why Glutathione cannot be produced by the ribosome?
4
Structure of mitochondrial ribosomes
5
Why isn't acetyl-coA an entry point for gluconeogenesis?