Can anyone help me to find the name of this small yellow bug with black head and three black stripes on the back. It was found in Jura, France: 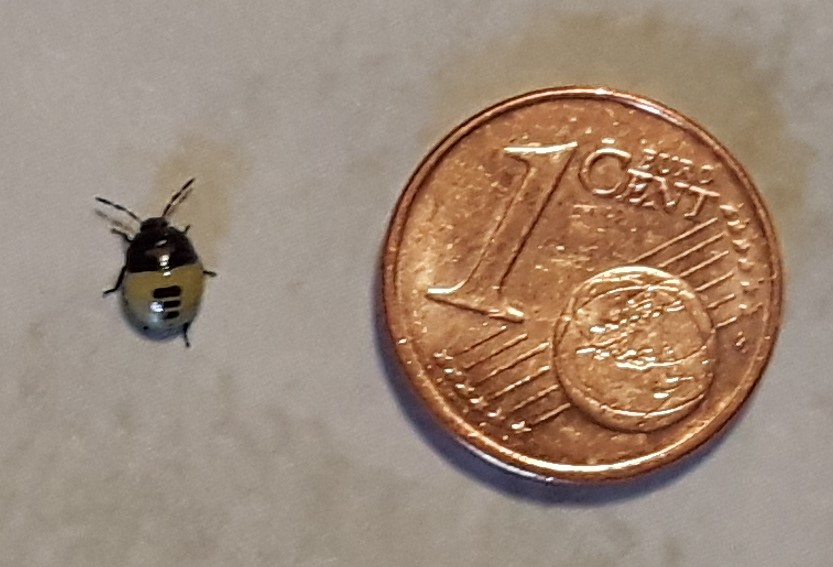 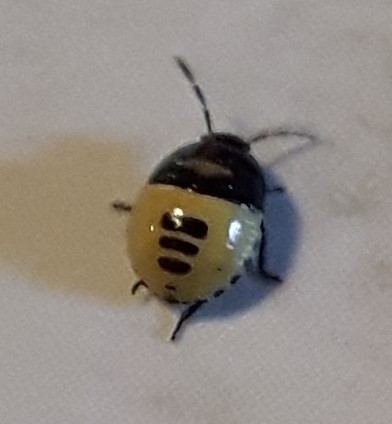 It looks like a yellower version of the brown marmorated stink bug (halyomorpha halys) nymphs I've seen in my garden in the US (west Texas). They change colors throughout their life span, so perhaps that's an older nymph that's begun changing to brown. They're prevalent in the US, Europe, and Asia, according to Wikipedia (https://en.wikipedia.org/wiki/Brown_marmorated_stink_bug).

I have no research experience with this insect, and I am not a biologist -- all of my research on this consisted of google searches for variations on "small red beetle three black lines." 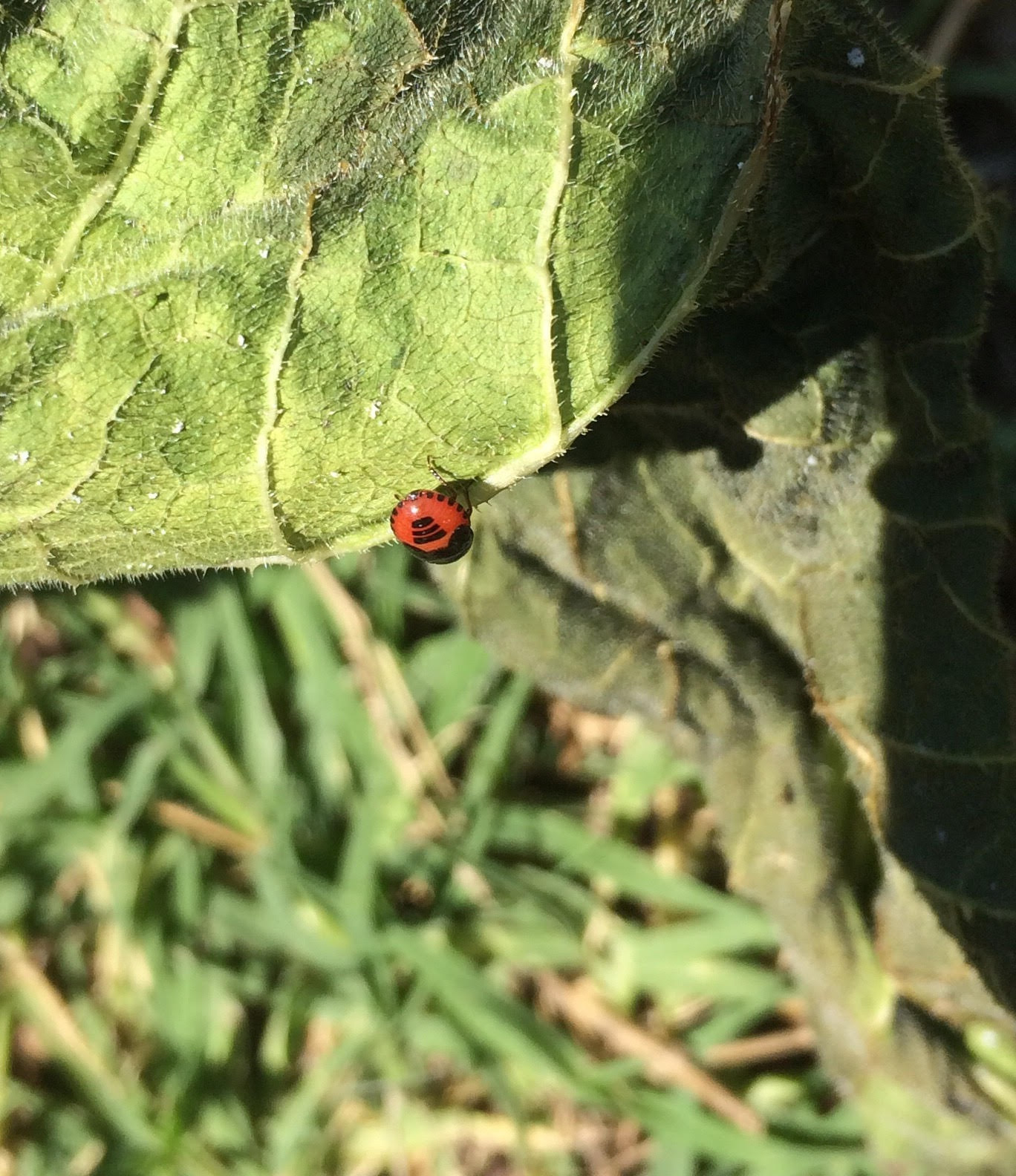 After your addition of locale I think Spined Citrus Bug isn't a possible candidate, from web results there is no sighting of it in France but your insect is of related taxon under the Suborder Heteroptera.

It appears a nymph of Spined Citrus Bug, Biprorulus bibax.

Although native to Australia, Biprorulus bibax is considered a pest because it feeds on the fruits of lemons, mandarins and oranges, causing drying and brown staining of the fruit segments, gumming on the skin and premature fruit drop. Their native host is the desert lime, Eremocitrus glauca.

Adults are green, 15–20 mm long, and have a pair of prominent spines on the shoulder of the thorax.

When overwintering tight clusters of up to 50 adult bugs can be found in a single tree. A male-produced aggregation pheromone is responsible for the clustering. The pheromone is attractive to males and females, both reproductive and non-reproductive.

I couldn't find any credible source with description of the early instars but the picture of the late instar on the linked website surely shows resemblance with your bug and I think yours is an early instar (any instar below IV).

The egg is 1mm across, almost globular and pearly white when first laid. Red, yellow and black markings develop as the embryo matures.

The first instar is almost oval, 1.5 to 2 mm long, with a short rostrum.

This website dedicated to the Biodiversity of Australia has recorded sightings of Biprorulus bibax eggs and hatchlings and the latter strongly resembles your insect.

Very hard to determine the exact species without specifics like which plant/habitat it was found in,... But one thing is for sure, this is a nymph of the Pentatomidae family.

Given the location this one is found, its size and the most likely encounter due to abundancy I'd say it's an early stage nymph of the Tritomegas bicolor (Pied Shieldbug). 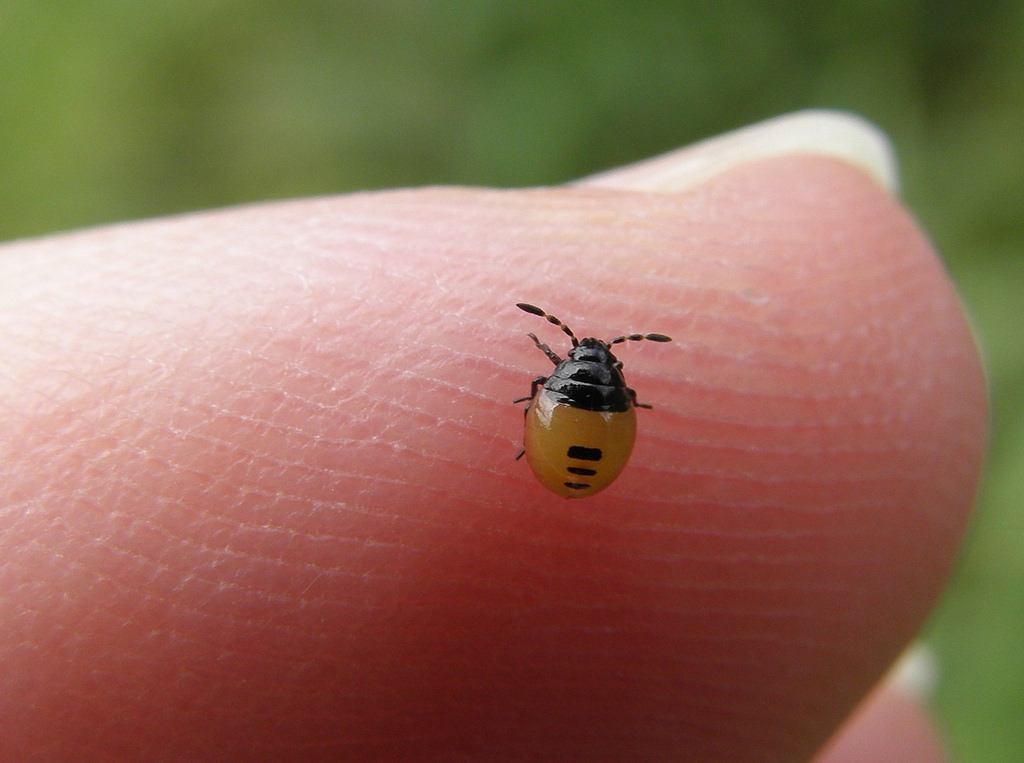 This species is found across North Africa, Europe and Central Asia, although in the British Isles, it becomes rarer towards the north, and is absent from Scotland and Ireland. (source: Wikipedia Pied Shield Bug)

The adults are 5 to 7 mm in length. Their colour is mainly black with white irregular spots. You'll most likely find them on the ground (as they are burrowing bugs or burrower bugs), but occasionally or during nymph stage you'll find them on dead nettles (Lamium). Hard to distinguish from T. sexmaculatus.

6
What insect is this? (Black body two orange lines in its back and six legs)
16
Identifying a thin, black, worm-like creature with a hammer-shaped head
4
Europe: big fly with black/yellow striped body: I'm guessing a horse fly?
4
Help to identify larva found in sink?
4
Identify this black dragonfly with bluish coloration along its flat top, yellow on it's mid-body and green on its head
1
What's this bug that is pretending to be an ant?
1
Tiny Green beetle
4
Bug Identification: Black Insect with Red/Orange dot on back