How can a species switch from r to K - reproductive strategy in a single generation?

I ask because it seems as though humanity is in the midst of doing exactly this. Only a few decades ago, human population was growing exponentially, and it seemed destined to keep growing until hitting constraints of food supply, at which point we would devolve into resource wars and famine. But then it didn't happen -- over the last few decades, fertility rates in the developed and developing world have plummeted and the world population is expected to stabilize in the second half of this century around 10-11 billion people. Demographers list a number of reasons for this -- education and empowerment of women, urbanization, decreased child mortality and increased life expectancy, availability of safe and effective contraception, etc. The common thread is that these trends encourage people to invest more into fewer offspring. It's as though our entire species is spontaneously deciding to switch from an r-strategy of reproduction to a K-strategy.

My question is whether this is unprecedented or not. I had the impression that r or K strategy was typically a function of species, but here we have a case where humans seem to be switching between the two strategies in a single generation. Are there other species which can change their entire reproductive strategy when the population approaches its carrying capacity? If so, what kinds of environmental cues or epigenetic factors trigger the switch? How do they manifest themselves in the case of humanity's current switch?

The issue in your reasoning is to associate a $r$ or $K$ as being a property intrinsic of the species which, while not entirely wrong, is rather misleading. 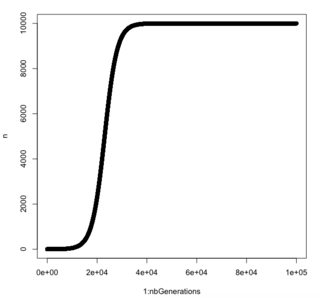 Now, in my example I chose $r=0.0004$, just pick some greater $r$ value and you'll see that such change from being a r- to being a K- strategy species can change very quickly. Consider for example 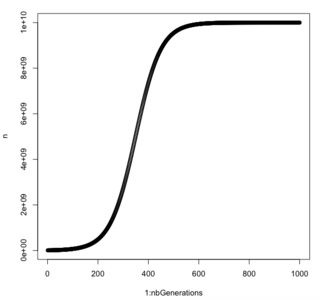 If you play with high values of $r$, you can get overshooting and you can even get chaotic population dynamic.

Are there other species which can change their entire reproductive strategy when the population approaches its carrying capacity?

Of course, this change in a conscious. It is not a decision of the species. It is not either so much an evolutionary process. It is just a consequence of their environment. Yes, all species follow some kind of model of population growth. The famous example of logistic population growth comes from daphnia which growth dynamic has been highly studied. Daphnia can have quite a high $r$ value (depending on the environment) and they can typically show overshooting behaviour of the carrying capacity before settling down back to the carrying capacity.

Not the answer you're looking for? Browse other questions tagged ecology demography or ask your own question.

4
How do you estimate global species richness?
3
Why Can Varied Species Live Together in Particular Ecosystems?
6
How far in can non-extremophiles live, in Earth?
3
How does ecology differ from biology?
2
Can assimilated energy be simply lost from a trophic level?
4
Can an exotic species be also endemic?
0
How can DNA profiling be used to determine the number of organisms from a specific species that is within a certain area?
5
What is the biology behind human population dynamics?
2
Can two populations of the same species pollinate during different times?