What is the biology behind human population dynamics?

A paradox: Human population growth looks a lot like a simple logistic growth pattern. But the simplest interpretation of logistic growth doesn't seem to fit. Is this peculiar to humans, or does it have a biological explanation?

There are compelling sociological explanations -- education and empowerment of women, urbanization, decreased child mortality, access to contraception, etc. all point individuals toward a reproductive strategy of investing more into a smaller number of children. But from a sociological perspective, it appears to be a mere accident that all of these forces are converging at once to save us from a scenario of high birth rates and high death rates. One suspects there might be something more fundamental going on here.

Maybe there's an evolutionary advantage to this. A population which generates lots of individuals destined to fight one another or die of hunger before reproducing seems to be wasting a lot of energy, especially if individuals care for their young. An overcrowded, underfed population may be more vulnerable to catastrophic disease (especially in a social species), and reduced individual fitness may actually reduce the total amount of resources the population is able to extract from the environment. If a species relies on cooperation within social groups, then perhaps excess births lead to intragroup competition that undermines group fitness. The basic principle of group fitness -- that sometimes it is more advantageous to help others in one's social group than to act directly for one's own benefit -- may be magnified when populations are stable with little room for growth (just as in a mature marketplace, it may be easiest to cooperate with an established business, whereas in a new sector it may make more sense to grow a new business from the ground up).

So I would look for this phenomenon among species that form cooperative social groups and care for their young -- colony-forming insects and large social mammals spring to mind. From my amateur reading, it sounds like lions might be a non-example, regulating their population by pushing excess or unfit individuals out of the pride to their likely death (or at least, this suggests that the population is not regulated solely via birth rates). But it seems like this could be addressed experimentally: for example, if individuals from a stable population of species $X$ are introduced into a new environment that can easily support a larger population of $X$, then does their birth rate go up?

Among the (a)-type factors we're particularly interested in might be abundance of food, space, disease, social stability,... Candidates for (b) might include crowdedness, air quality, presence of greenery and wildlife, stress levels,... For (c), one might look at libido, fertility, desire for a mate or for children,... For (d), ideally one could get down to the level of things like hormone regulation.

Here are a few crazy theories that might be supported.

In urban areas, the smell of other humans and lack of greenery are cues that the population is overcrowded and food is scarce, which via some dedicated hormone-regulation system common to all mammals suppresses the desire to mate or raise offspring (but in the United States, these factors are mitigated slightly by our constant showering and our sparser settlement patterns, leading to a birthrate higher than in much of the developed world.)

The gradual process of political integration and tolerance has led us to identify larger and larger subpopulations of humans as "us", and a sense of being part of a large group with a stable population both upregulates pro-social behavior and somewhat suppresses the desire to have children of one's own.

The elevated stress levels of modern life are a cue that one can ill-afford the investment required to reproduce, suppressing the desire for children.

Its actually much simpler than you are making it out to be, carrying capacity is not an issue, humans long since surpassed the planets carrying capacity without advanced technology. The real factor is infant mortality.

consider both K and r strategies

Say you have two sets of parents each starting with the same amount of resources. In r strategy the approach is to invest little in each individual offspring and have a lot of them, K strategy involves investing a lot of resources in each offspring and having only a few. The same amount of resources are consumed by each set of parents. It seems like r should always win, but as long as offspring mortality is low K usually wins. Why because high investment offspring can usually easily outcompete low investment offspring for finding mates as long as they survive.

Who has an easier time finding a mate the man who was half starved as child and has chronic health issues and missing teeth becasue of it or the man who had top of the line nutrition and medical care and is physically fit, with good teeth. these are the extremes but it holds true all long the spectrum, better health, better education, better environment (moving costs a lot of resources), all correlate with more mating success.

For each individual having fewer high investment children is better as long as there is a high likelihood said children will survive. Which has only become true with modern medicine and sanitation. So by each parent doing what is best for their genes and offspring society as a whole has fewer and fewer children, again as long an child mortality is very low.

But for most of human history child mortality was highs so having few offspring did not work, because there was a decent chance all of them would die. Thus having lots of children was the only way to guarantee having any children who live to mate. As child mortality drops the number of offspring who survive skyrockets (thus population also explodes) so mating success becomes a much bigger factor than chance of survival, because the chance of death is so low. Modern medicine and sanitation has changed the selective pressures on our mating strategies. More K leaning strategy is now evolutionarily favored in humans, so the number of total offspring declines, so the population growth also declines. This is called the demographic transition model.

The correlation is surprisingly tight, as infant mortality drops population growth drops add in things like access to education and it gets even tighter. 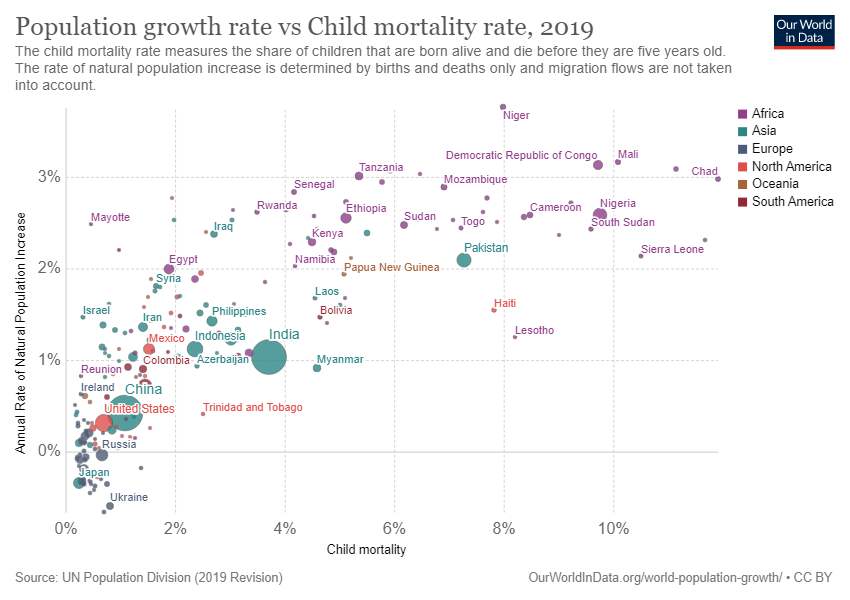 I feel obligated to point out the r and K strategy are not binary but ways of describing a spectrum of reproductive approaches.

I just read about John B. Calhoun's mouse utopia experiments in an interesting history stackexchange post.

The basic result is that when mice are given unlimited resources but constrained by space, their population does initially explode but this leads to a loss of social cohesion and thence to plummeting population levels.

While far from conclusive, this suggests to me that there are indeed some kind of biological fundamentals going on here which control overpopulation by means other than widespread starvation.

Not the answer you're looking for? Browse other questions tagged human-biology evolution ecology human-evolution demography or ask your own question.

15
Vaccination and population dynamics of an epidemic
2
Phenoptosis, behavior evolved for good of species?
5
Simulating substitution rate of neutral mutations
1
How can a species switch from r to K - reproductive strategy in a single generation?
3
How do I determine this logistic growth model formula?
8
What are the evolutionary reasons behind men being taller than women?
2
How to model species interactions on population size dynamic?
5
How to convert system of equations with explicit substrate consumption into an implicit one?
0
Ancestral inference from demographic data