Is "reaction center" the same as "photosystem"?

I have a diagram which labelled a part of PSI (Photosystem I) as "reaction center". But I have read on several websites that the reaction centers are PSI (the whole complex, not just a part of it) and PSII.

So, which one is correct? And if the reaction center is only a part of these PSI and II complexes, what does it contain? And what does it do?

Reaction centers are specific sites within the photosystems where the adsorbed photon energy is transferred to electrons.

"Photosystem" and "Reaction center" are not synonyms​.

The absorption of light energy and its conversion into chemical energy occurs in multiprotein complexes, called photosystems, located in the thylakoid membrane. A photosystem has two closely linked components, an antenna containing light-absorbing pigments and a reaction center comprising a complex of proteins and two chlorophyll a molecules. (emphasis mine)

Therefore, a photosystem is composed by: 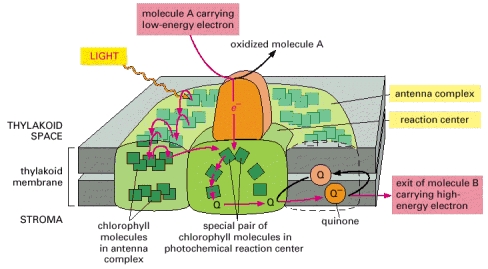 Figure: The antenna complex is a collector of light energy in the form of excited electrons. The energy of the excited electrons is funneled, through a series of resonance energy transfers, to a special pair of chlorophyll molecules in the photochemical reaction center. The reaction center then produces a high-energy electron that can be passed rapidly to the electron-transport chain in the thylakoid membrane, via a quinone.

Thus, in conclusion, the reaction center is part of the photosystem.

PS: Both quoted texts answer your second question ("And if the reaction center is only a part of these PSI and II complexes, what does it contain? And what does it do?").

Not the answer you're looking for? Browse other questions tagged cell-biology botany plant-physiology photosynthesis or ask your own question.

3
Independence of Light independent reaction in photosynthesis?
8
Photosystem 1 and 2; P680/P700; Chlorophyll a/b
1
Reaction centre in Photosystems of higher plants
4
Which complexes physically pump protons in photosynthesis?
4
What part, roughly, of the carbon in a plant comes from the soil? As opposed to the atmosphere?