What insect is this? (Central Africa)

I live in Africa (DR Congo). Here we have these insects that look like ants. They appear between May and June.

These insects give severe damage if crushed on the skin. They contain something like acid that burns the skin. I saw many people wounded by them.

So I would like to know what these insects are, and whether they can cause death if swallowed? Can someone point me to where I could learn more about them? 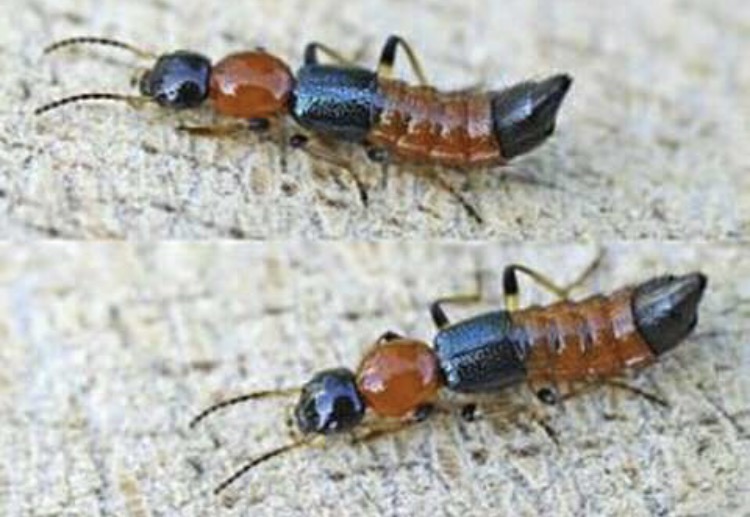 PS: There are no forests near where I live.

It is a Rove beetle of the Genus Paederus.

There are widely spread on the planet and I found two species of Paederus sp. that are found in East of Africa, together they are called Nairobi flies. 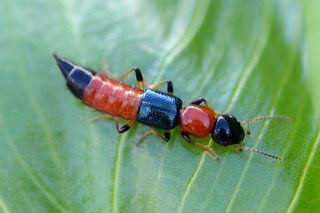 The medical condition it causes is called Paederus dermatitis.

This skin irritation results from contact with pederin, a vesicant toxin in the hemolymph of many but not all females in the genus Paederus.

The toxin is manufactured, not by the beetles themselves, but by endosymbiont bacteria, probably some species of Pseudomonas.

Three different genera of rove beetles, all members of the same subtribe Paederina, can cause paederus dermatitis: Paederus, Paederidus, and Megalopaederus.

This makes it also a potent antitumour agent.

The manufacture of pederin is largely confined to adult female beetles—larvae and males only store pederin acquired maternally (i.e., through eggs) or by ingestion.

It is a contender of the title of most powerful animal toxin.

It is among the most potent animal products known, more so than Latrodectus venom, which is 15 times more potent than cobra venom.

2. STUDIES ON THE MECHANISM OF ACTION OF PEDERINE, 1968

5. The Role of Natural Products in Drug Discovery

Note: I found the picture in your question is the same as that of Wikipedia's picture of Paederus.

3
What flying insect is this?
15
How to protect my mounted insect specimens from ... insects?
2
What is this insect (Egypt)?
0
What is this large beetle from Shirpur, Maharastra (central India)?
2
What is this bizarre insect?
23
What are these bladder snail parasites?
2
Is this a type of fruit fly?