Why are strains of bacteria stored when they are inactive (frozen)? What is the problem with storing growing cultures for long periods?

Aside from the comment that frozen cells require less manual maintenance and expense (which is a big plus), active cultures can rearrange/recombine plasmids causing mutations and deletions (especially in the case of toxic inserts). For example, see this article:

Although a bacterial culture on a petri dish, slope or stab culture is in a closed environment and may start healthy, over time, the number of viable cells will decrease to zero as nutrients are being used up. The goal of preserving the cultures in a frozen state is to slow their metabolism and, in relation to that, their death rate so that when the culture is revisited, some of the cells are still viable and available for culturing. The reasons the cells die can be numerous, but in every instance are based on the inherent chemistry of the cells and their environment. If the deleterious chemical reactions can be slowed or halted, then the overall culture will remain viable for a longer period of time.

In addition to the other comments and answers, cryopreservation tubes tend to be much smaller and take up far less space than an agar plate or stab cultures. 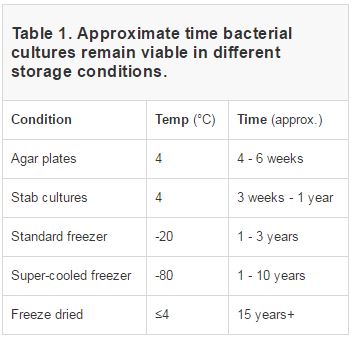 Not the answer you're looking for? Browse other questions tagged molecular-biology microbiology synthetic-biology or ask your own question.

14
How long can E. coli stocks be stored at -20°C?
11
What is the advantage of using starter cultures for growing bacteria?
3
Can bacteria metabolize fatty acids for fuel?
1
Number of Bacteria
4
Do unique communities of bacteria form inside water storage in plants?
0
Why do coliform bacteria smell so bad?